The death toll from Hurricane Ian has risen to 58 people in Florida, which was hit by a near Category 5 storm on Wednesday, with four dead in North Carolina when it was a tropical storm on Friday. 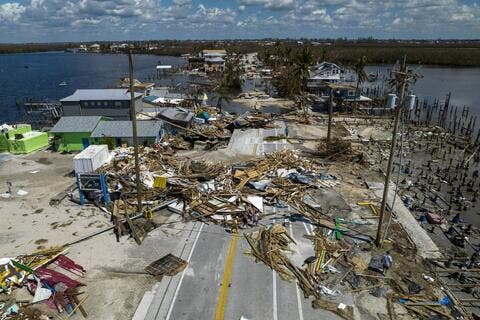 Ian, which became a tropical storm Sept. 23, passed over western Cuba three days later on Monday as a Category 3, with three people dead.

After making landfall in Southwest Florida, Ian then traveled along the Atlantic coast, reaching landfall again in the United States as a Category 1 in South Carolina, where no fatalities were reported.

Jill and I will travel this week to Puerto Rico and Florida to meet with families and local officials who have been affected by Hurricane Fiona and Hurricane Ian.

We see what you’re going through, and we’re with you.

The toll on Florida has proved difficult to pin down as search and rescue operations are still underway, with the Florida Department of Law Enforcement on Sunday night stating that at least 58 people died in Florida and CNN reporting that the number was as high as 74.

Deanne Criswell, the administrator of Federal Emergency Management Agency, told CNN on Sunday that the "impacts are devastating" and addressed the possibility of more casualties.

"While we certainly hope that we can continue to find more people alive and bring them out, we're going to support the state in their needs as we continue to go house by house and make sure everybody is accounted for," Criswell said.

More than 1,000 people have been rescued and evacuated from flooded areas since the storm hit last week, the Florida Division of Emergency Management said in a statement Saturday.

After pounding Florida, the storm later hit South Carolina then downgraded into a post-tropical cyclone and moved through North Carolina and Virginia before it ultimately dissipated Saturday.

"The storm has passed, but many hazards remain with downed trees, downed power lines and power outages," Cooper said in a statement.

"We mourn with the families of those who have died and urge everyone to be cautious while cleaning up to avoid more deaths or injuries."

President Joe Biden and his wife, Jill Biden, will travel to Puerto Rico on Monday to survey damage from Hurricane Fiona, which ravaged the U.S. territory a week before Ian hit Florida, the White House announced Saturday.

Biden will then go to Florida on Wednesday to assess the damage from Hurricane Ian. The president and DeSantis, who have sparred over social issues in the last several months, shied away from political attacks as the storm approached Florida.

"He thanked me for the immediate response we had. He told me how much he appreciated it. He said he was extremely happy with what's going on," Biden said of DeSantis in comments reported by The New York Times.

"This is not about anything having to do with our disagreements politically. This is about saving people's lives, homes, and businesses."

In a White House fact sheet, officials said that more than 87,300 households have already registered for assistance as part of Biden's expedited major disaster declaration for the state of Florida. The president also approved an emergency declaration to provide North Carolina with federal assistance.

We live on the beach in Naples, Florida. We stayed through the Hurricane Ian. Thought I'd share a rather notable photo from the experience... pic.twitter.com/LziDWoVN78

Though officials have been working hard to restore power to Florida, more than 764,274 customers are still without power in the state out of a total of 11.1 million, according to PowerOutage.us.

Power has been restored to Virginia and North Carolina, where 27,000 were without power earlier on Sunday.

Florida Gov. Ron DeSantis on Saturday said in a news release that Florida Power and Light had restored power to more than 45% of accounts in Lee County while the Lee County Electrical Cooperative had only restored power to 9% of their accounts, 18,000 out of 183,000 customers.

DeSantis called on the LCEC to accept mutual aid to "expedite power restoration" to residents living in the county, which was hit hard by Hurricane Ian -- particularly the communities of Cape Coral, North Fort Myers, Sanibel and Pine Island.

In a news release Sunday afternoon, DeSantis called on Florida's Department of Transportation to expedite repairs needed to restore access to Pine Island by Saturday.

"These repairs are needed for first responders and residents to access the island, as well as other recovery efforts such as power restoration and debris removal," the release reads.

DeSantis said that crews have cleared more than 88% of roads in Florida, which had been blocked by fallen trees and other debris making them impassible. A temporary road will need to be constructed to reconnect access from the mainland to Pine Island.

"Once the temporary roads is complete, FDOT crews will continue clearing the path through the island to provide safe, drivable access for first responders, disaster recovery experts and residents," the release reads.

More than 9,000 residents live on Pine Island and those who remain on the island are without power, water and other critical resources, DeSantis said.

In another statement, DeSantis said Florida worked with Elon Musk's SpaceX company to deploy 120 large Starlink units in the state to quickly provide broadband to the state as it recovers from the deadly storm.

"Thanks to your innovative technology, Floridians will be able to better connect with their loved ones," DeSantis said.

Officials have started to lift mandatory evacuation orders that were imposed in at least 12 Florida counties, while others said they would enforce curfews.

According to the Florida Division of Emergency Management, mandatory evacuation orders remain in place in Sarasota, Osceola and Lee counties. 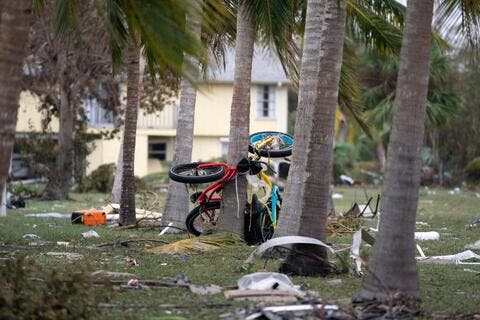 A voluntary evacuation order was issued Sunday in the city of St. Cloud "due to rising floodwaters," officials said in a statement.

In the city of Bunnell, residents have been asked to limit laundry and taking showers through the weekend to ease strains on the local wastewater treatment plant.