Facing backlash after news of terminating one of its Staten Island, New York warehouse workers, Amazon explained that the company's decision to fire the employee has nothing to do with his demand for a better coronavirus response. 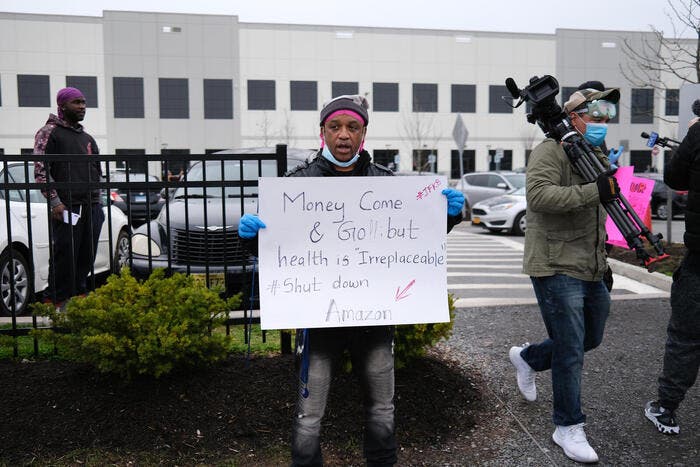 In a statement released yesterday, the e-commerce giant highlighted that the worker, who led a walkout with other employees demanding better health measures amid the deadly virus was fired indeed, but that the decision was taken after "the worker, who was sent home after reporting being in direct contact with a COVID-19 supervisor, violated safety measures and came back for the protest, endangering others' lives".

Amazon clarified that assistant manager Christian Smalls was asked to stay at home for a 14-day paid quarantine, following information that he had been in touch with an individual who was later diagnosed with the novel coronavirus.

The company continued to explaine that the employee has committed a serious violation of safety measures taken by Amazon to keep its teams safe across the world, as the virus continues to take more than 42k lives worldwide.

Give it up for the 100 Amazon warehouse workers on Staten Island who walked out this afternoon to demand safe working conditionspic.twitter.com/CtlTDsLDUm

On his Twitter, Christian Smalls denied Amazon's claims saying that "he was not on a paid leave." He also accused the company of lying to the public and that while they sent him home a few days ago "they didn't do the same with other employees who were in contact with the same supervisor".

I held safe calm rallies in the break room everyday this week I was not on paid quarantine don’t believe the Hype #AMAZON #stopthelies You sent me home Saturday but not these people who were direct contact with a positive tested supervisor to keep operations going pic.twitter.com/P1spN8uaNU

Exclusive: Leader of today's Amazon warehouse coronavirus-related strike was just fired. He says it was retaliation. Amazon says it was enforcing safety rules by terminating him. https://t.co/YfuQBfJz86

Amazon has been slammed for its decision to carry on with manufacturing and shipping services across the US despite the drastic rise of coronavirus infections in the country. The company only grants employees with no record of direct contact with confirmed cases unpaid leaves, while it says it's putting extra effort into cleaning its sites regularly.

Amazon workers in NYC went on strike to demand their warehouse be cleaned after someone tested positive for #coronavirus. At least 19 Amazon warehouses have positive cases.

A worker who organized the NYC protest has been fired — Amazon says for violating safety guidelines. pic.twitter.com/gws5OGGBRK

A few weeks ago de Blasio called on the federal government to call for a nationwide lockdown, a demand that was refused by US President Donald J. Trump, who insisted that "people should go on with their lives to avoid an economic collapse."