Assassination of Prominent Lebanese Activist Points at One Perpetrator Only

Hours after his family and friends reported him missing, Lebanese security forces announced finding the body of prominent activist, publisher, and writer Lokman Slim; saying he was shot twice in the head while in his car near Sidon in southern Lebanon.

"It's a loss. And they [Hezbollah] lost. They lost a noble opponent, a person who used to spar with them smartly and comfortably, and that is rare." https://t.co/xPw5SS4kAd

Coming from the southern Lebanese Shiite background, Slim was known for his harsh criticism of Hezbollah, the political faction highly popular amongst his social circles. Throughout his work, Slim's views have been described as anti-Hezbollah, which has urged the public to believe that the armed militia has killed him last night.

Today marks 6 months of the Beirut blast, loss of beautiful souls, destruction of homes, businesses, our capital left in ashes.
As we are still demanding proper, transparent and speedy investigation, an activist was killed today.
We NEED justice!#لقمان_سليم

However, Lebanese social media users expressed their deep shock over the news of Slim's killing, especially that it comes exactly six months after the devastating Beirut explosion that killed 200 people. According to online comments, "Lebanese politicians have failed to hold the government accountable for the damage caused to Lebanon in light of the August blast, yet they seem quite active going after voices that dare to challenge or criticize them."

Lokman Slim is director of Hayya Bina and UMAM, a Lebanese organization that focuses on Shia politics and social dynamics.
His death is a shock in #Lebanon this morning!
Killed by a silencer. RIP#لقمان_سليم pic.twitter.com/O0oUR8MVT0

Photo: Activist #LuqmanSalim was threatened and mentioned names of those he held accountable #لقمان_سليمhttps://t.co/GILVFKxiT9

Several users have noted that Slim had already been reporting harassment by pro-Hezbollah people, who have tried to attack him and his family members in November 2019. They also posted photos of posters that were installed near the house, referring to him as a "traitor," in addition to a poster reading: "Glory to the gun silencer." 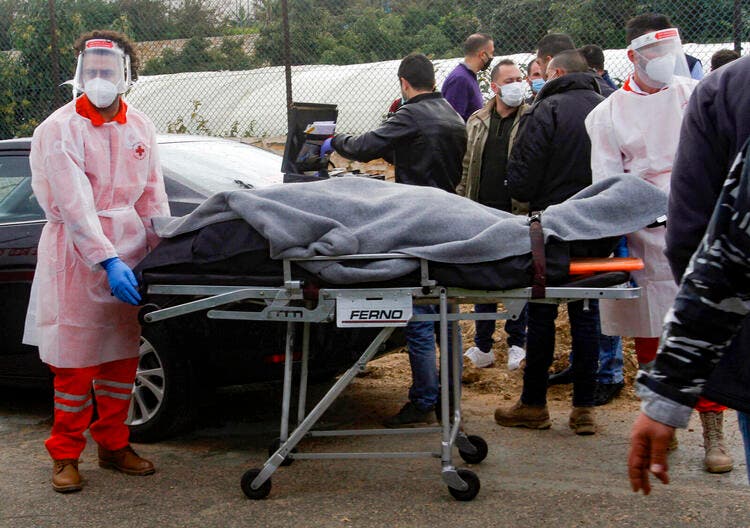 Medics evacuate the body of prominent Lebanese activist and intellectual Lokman Slim from the spot where he was found dead in his car, in the village of El-Aaddousiye, near the southern Lebanese city of Sidon (Saida), on February 4, 2021. Slim, a Shiite Muslim secular intellectual known for his opposition to the Shiite movement Hezbollah, had not been heard from by his family since getting in his car on February 3 evening to drive back to Beirut from south Lebanon. (MAHMOUD ZAYYAT / AFP)

Following news of Lokman Slim's murder, a tweet by Hezbollah's chief's son Jawad Nasrallah sparked wide condemnation, as he hinted that "what some think of as a loss is a gain to others," which was interpreted as his response to Lokman's assassination.

#Lebanon : As country reels from apparent killing of prominent Hezbollah critic Lokman Slim #لقمان_سليم , disturbing tweet posted then deleted by son of #Hezbollah leader Nasrallah - saying “ a loss for some is a gain for others and an unexpected blessing” pic.twitter.com/jmozVvJGWP

Prominent Lebanese intellectual and Hezbollah critic Lokman Slim was found shot dead in his car. Recalling the wave of murders of politicians and journalists who were vocal critics of Syria, Iran and Hezbollah after the 2005 Hariri killinghttps://t.co/U0bWMVUwxZ @DLKhraiche pic.twitter.com/5KpYSVZlB7

Moreover, Twitter users expressed their deep concern that their country will soon witness more assassinations targeting individuals, who speak up against the corruption of the political elite, remembering the Iraqi scenario where independent journalists and activists continue to face killings and threats for years now.

Civilians in the Military Court: Is Lebanon Sliding Into a New Age of Silencing Critics?
'Was He Abducted by Hezbollah?' Missing Lebanese Journalist Bizarrely Appears in Protest Calling for His Freedom
Spying for Israel? Is the Lebanese Govt Getting Rid of Opposition Activists by Defaming Them?
Tags:Lokman SalimLebanonLebaneseactivistLokman SlimassassinationKillingSouthern LebanonPoliticalHezbollahJawad Nasrallah