On the 31st of August, well-known Egyptian filmmaker and former member of the parliament Khaled Youssef announced returning to Egypt, after two years of what he described as "self-exile." 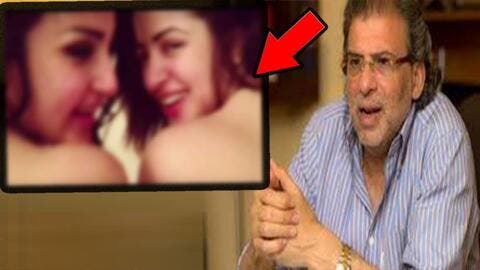 Translation: "When you meet the whole country at once after being away."

For the past week, the art scene in Egypt has "welcomed" Youssef back to the country, celebrating his return in several events whose photos have been shared on social media by the director himself.

However, this "warm welcome" for Youssef, contardicts the fact that he had to leave Egypt in 2019 following a leaked sex tape that featured the 57-year old film director with two young Egyptian actresses.

As soon as the video went viral in February 2019, Youssef left Egypt for France and announced relocating to Paris, saying that the video was "fake" and that it was meant as an attack against him and as a punishment for his political stances. As a lawmaker between 2015 and 2019, Youssef openly opposed a government decision to transfer two islands in the Red Sea to Saudi Arabia.

Translation: "It is so great being back home with the family. Photos of my visit to my hometown in Kafr Shokr yesterday."

Meanwhile, the two actresses who appeared with Khaled Youssef in the video were arrested by Egyptian police as they faced several accusations of "indecency." The two actresses were released on bail five months later but have reported being cast from the society ever since, that one of them had to leave Egypt for good after attempting suicide.

Translation: "The lives of two women have been literally destroyed because of Khaled Youssef. But he can be back as a hero with no reservations from anyone. In case anyone is still in doubt over men's social privileges."

Translation: "Khaled Youssef's return and the media celebration he's receiving from journalists, politicians, and public figures, while the girls who appeared in the video with him had to face prison, social rejection, and leaving Egypt shows just that the society can accept you based on how powerful you are."

Khaled Youssef's return to Egypt which seems to have happened following a settlement with the government has triggered questions over Egyptians' reactions to sex scandals, as online commentators compared the public welcome the man received over the past week, to the "unforgiving" approach the society had towards the two young actresses who appeared in the same video as the well-known filmmaker.