A new rule issued by the Saudi Ministry of Commerce and Investment has banned the use of words like "maid" to refer to domestic workers in the country.

Translation: "First law of its kind in the world. Saudi bans using the word "maid" in reference to house workers. This is the ultimate expression of humanity."

The rule aims to limit the use of offensive words when referring to individuals, mostly women, who are hired to work in house services in the country. As soon as it comes to effect, people applying for various forms of paperwork related to workers in their houses will have to use the proper words stated by the ministry.

Moreover, the rule applies to ads published in newspapers and online websites by people who no longer need help at their houses and who wish to find someone else who is interested in the workers' services.

Previously, such ads featured inappropriate wording like "services for sale," but now ads will have to state: "transferring services" instead. The law also prohibits Saudi households from charging domestic workers for fees of transferring their services to another household, Al Bayan newspaper reports.

Actually they call them the help now

The ministry has also demanded that such ads never include personal photos of the foreign workers, nor any of their personal information.

Online, many people welcomed the new changes, saying that more effort should be put into showing respect for domestic workers in Saudi Arabia and other GCC countries, whether in terms of expressions used in reference to them or in the treatment they receive from house owners.

For decades, human rights groups have called on GCC governments to have stricter laws that ensure better protection for domestic workers in the respective host countries, after a number of abuse cases have been reported, many of which led to homicide and in some cases suicide. 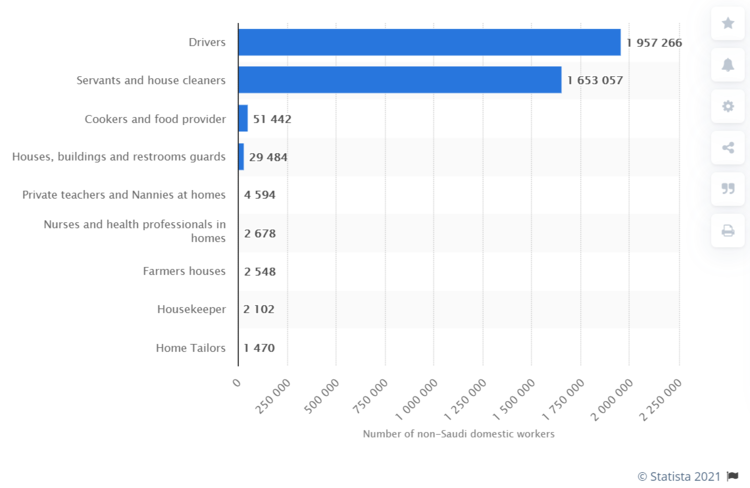 According to Statista, the number of non-Saudi domestic workers in Saudi Arabia has neared 4 million people during the first half of 2020, with the vast majority of them hailing from east and southeast Asia.