Elon Musk to Bernie Sanders: "I Keep Forgetting That You're Alive"

Published November 16th, 2021 - 12:15 GMT
Elon Musk and Bernie Sanders inaugurated a Twitter fight on Saturday. (Al-Bawaba)
Highlights
People have split on the which side to stand as both Sanders and Musk's discussion have Advantages and disadvantages.

A Twitter spat erupted between Tesla and SpaceX CEO Elon Musk and the American politician Bernie Sanders after the latter Tweeted about tax policy on super-wealthy people, CNBC reported. 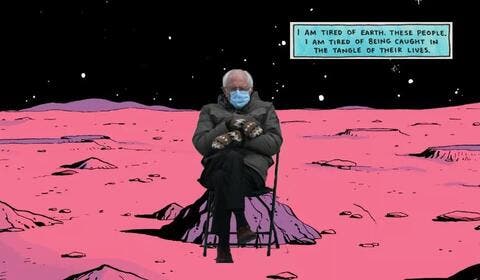 'Bernie Sanders and the Mittens' Memes Take Over Social Media

Bernie Sanders posted, Saturday, on Twitter: “We must demand that the extremely wealthy pay their fair share. Period.” Elon Musk, who is one of the world’s richest men, replied with a comment reading: “I keep forgetting that you’re still alive.”

The latest from Elon Musk, the world's richest man: pic.twitter.com/nvl8T0tZWF

Musk then mocked the 80-year-old democrat senator on Sunday claiming that he is a “taker, not a maker.” SpaceX CEO questioned Sanders: “Want me to sell more stock, Bernie? Just say the word.”.

SpaceX CEO Musk sold about $6.9 billion worth of Tesla stock last week. However, he still owns over 166 million shares in the company (about 4% of the shares he holds directly). Tesla stock following the sale shrank 15.4% for the week, which is the worst one-week performance in 20 months.

What do you think of a tax structure where there's only a sales tax?

So that rich folks who buy a lot of stuff would get the largest tax burden, and low-income families who don't buy much would pay the least

This would punish extravagant purchases instead of capital-building

On the other hand, Musk has moved Tesla’s headquarters from Palo Alto, California, to Austin, Texas. California is well-known for being the highest state in income tax compared to Texas which could save Musk billions of dollars based on his compensation package awarded in 2018.

According to Bloomberg Billionaires Index, Elon Musk was defined as the world's richest person, having a net worth of $285 billion.

Taxing extremely wealthy people is a big part of the American Senator’s platform. As the chair of the Senate's budget committee, Sanders suggested an annual tax on the top 0.1 percent of US households, saying that it might raise about $4.35 trillion over the next decade and cut the wealth of billionaires in half over 15 years. He also wants to implement key enforcement policies on the proposed wealth taxes, CNN reported.

Opinions on social media split between people supporting the suggested tax policy against wealthy people and opponents to Sander’s plan.

Musk is taking on ⁦@BernieSanders⁩ with insults for proposing that billionaires pay a fair tax. I know whose side I’m on. Let’s unite with Bernie and other progressives across our countries for a global wealth tax that billionaires can’t avoid. https://t.co/U5PbA2UVVD

British MP John McDonnell posted on Twitter: “Let’s unite with Bernie and other progressives across our countries for a global wealth tax that billionaires can’t avoid.” While another person revealed that he stands with Elon Musk supporting him by saying that Tesla and SpaceX CEO is providing thousands of jobs which benefit in decreasing the unemployment rate in the country.

I hate the fact that Musk is making me side with Bernie. https://t.co/M1Tz39HPqy

About Bernie Sanders:
Sanders is an American politician and activist who has served as the junior United States senator from Vermont since 2007. He is the longest-serving independent in U.S. congressional history, although he has a close relationship with the Democratic Party, having caucused with House and Senate Democrats for most of his congressional career.

About Elon Musk:
Musk is an entrepreneur and business magnate. He is the founder, CEO, and Chief Engineer at SpaceX; early-stage investor, CEO, and Product Architect of Tesla, Inc.; founder of The Boring Company; and co-founder of Neuralink and OpenAI.