Jordanians took to the social media to complain after content appeared allegedly related to the LGBTQ+  in one of the school books in the Kingdom. In the book, a picture of two boys appeared in matching clothes with a “Like me” word (which can be inferred in Arabic as 'being gay') written below the photo.

Following the massive social media campaign over the possible promotion and acceptance of the LGBTQ+ through teaching Jordanian public schools, the Jordan Minister of Education took to the media and social platforms denying there was any intension to do that.

Minister Wajih Owais denied the picture circulating on social media, including two children in the same uniform, and under the words (like me), and in one of the kindergartens, implied anything sinister or deviant behaviour.

Owais also added this is not included in the educational subjects, but was part of homework material organized by the teacher. He justified the photo didn't imply any innuendo but simply meant the two children are similar to one other. 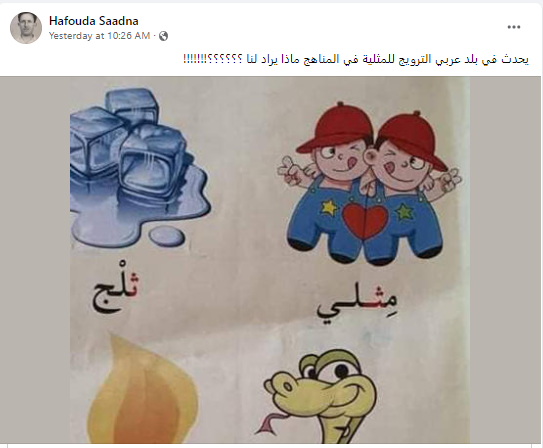 The minister further added all the content in the school books go through specialized committees before being approved, saying a  team from the Ministry of Education will head to the school in question and question the teacher.

What made people confused as a way to promote LGBTQ+ content is that the two boys who appeared to wear matching clothes had a heart between them.

Furthermore, Jordanians complained this is not the first time such content was found in one the Ministry books. Back in 2019 parents called on the Ministry to remove such misleading content.