Craig Gray and John Burns, a US gay couple, were shocked after receiving a homophobic slur on their receipt by Arby's employee in Lafayette, Indiana; days after declaring June as Pride month.

The Arby's employee was later fired by his managers after they found out that he had written a gay slur on a couple's receipt.

John Burns said he and his partner Craig Gray were “shocked” to find the word “fag” written on their Arby’s receipt after they got lunch this past Sunday.https://t.co/8pLJG00mqf

One of the gay couple had immediately took a photo of the receipt and shared it on his social media profile before showing it to the manager.

Gray took the receipt to his Facebook and wrote: “So this just happened at Arby’s! Happy Pride, huh?” 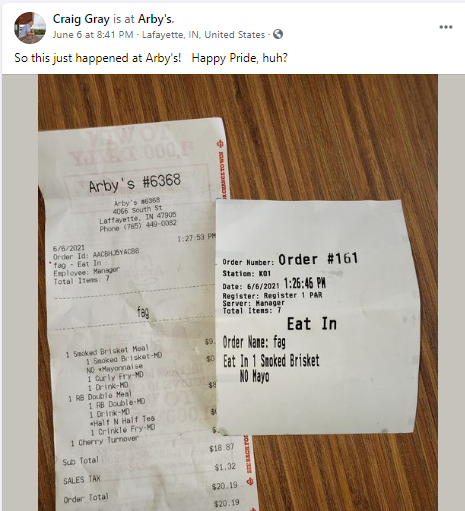 Last Sunday, the gay couple stopped at the fast food restaurant; Burns noticed while waiting for food that their receipt read 'f*g' in place of their name. The employee tried to cover it by saying it was a computer glitch, but he was immediately fired by Arby's management.

The gay couple received tons of social media support; some said that they will even boycott Arby’s branch after the incident; while others apologized to them and thanked the couple for referring it to the management.

The company apologized about the incident saying ‘franchised employee was terminated’ and it 'has zero tolerance for discriminatory speech of any kind.'

The White House revealed: "The Biden-Harris administration has taken historic actions to accelerate the march toward full LGBTQ+ equality."