How Was a Popular Video Game Used in the Libya War According to This Saudi News Channel?

Published July 7th, 2020 - 08:41 GMT
Online people were quick to realize that the video isn't a real one of the actual airstrike. (Twitter: AlHadath)

Reacting to a video posted on their Twitter account, a popular Saudi news channel came under fire as social media users found out that the video dubbed as "viral footage of an airstrike on Al-Watiya Airbase" was recorded off a popular military tactical shooter video game. 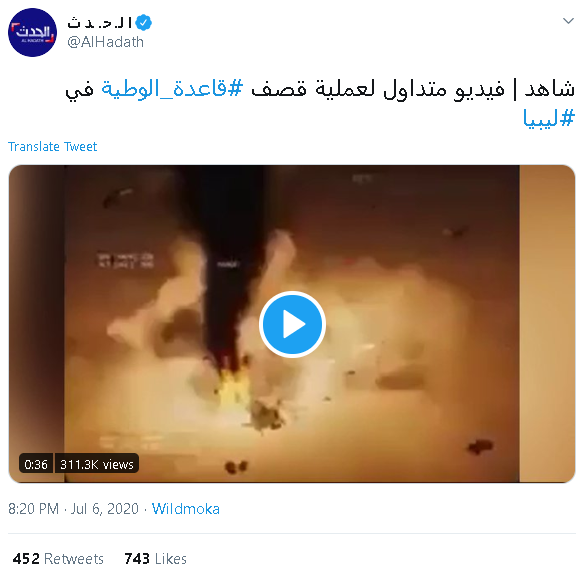 Dubai-based Al Hadath channel, owned by the Saudi-based MBC group, posted the short video on its Twitter account referring to an airstrike that targeted the airbase allegedly controlled by Turkish forces.

However, online people were quick to realize that the video that was removed later isn't a real one of the actual airstrike, but was actually taken from the Arma 3 game, which urged them to question the widely-watched news channel's credibility.

Translation: "Al Arabiya Al Hadath channel has posted an excerpt from a military video game called Arma 3 claiming that it shows the airstrike that targeted Al-Watiya Airbase in Libya on Sunday night."

Translation: "video games have been used to makeup and promote a non-existent reality through TV channels. This was said to be an armed attack on the Turkish Al-Watiya Airbase in Tripoli, which resulted in no losses since it's nothing but a video game."

Perceiving the video as misleading despite news of the airstrike on the Al-Watiya Airbase, social media commentators condemned Al-Hadath and wondered if "they should start investigating news from a misleading source."

Last year, an Egyptian famous talk show host used a video taken from the Apache: Air Assault video game and claimed it was a Russian airstrike on Syrian targets.

The two incidents are triggering many questions on whether video games will be the new form of propaganda, especially as video games continue to present more realistic imagery every time.