Published September 21st, 2020 - 06:24 GMT
37-years old Maysoun Douas celebrated the marriage of two young women, congratulating them saying that there is always "there is always time for love". (Twitter: @MaysounDouas)

Two days ago, a Spanish Muslim politician- Madrid-based Counselor posted photos of a ceremony during which she married a lesbian couple, saying that she was proud to hold her first civil wedding despite the hard times the country is going through due to the pandemic. 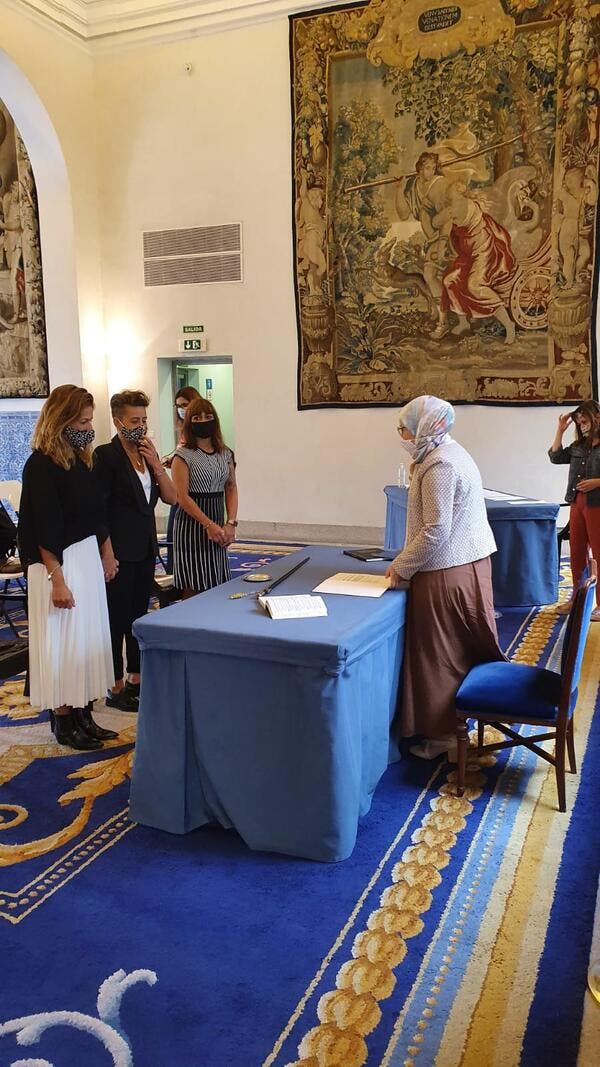 In her tweet, 37-year old Maysoun Douas celebrated the marriage of two young women by congratulating them saying; "there is always time for love," which prompted many mixed reactions on social media.

Despite several angry comments of conservative people rejecting the association between Islam and homosexuality, the counselor's tweet received many supporting comments, suggesting that "she is a good example of modern Muslim women."

Celebrating photos of the lesbian wedding held by Douas, many online commentators argued that the counselor, who was born to Moroccan parents, is the best representation of tolerant Muslims and immigrants who embrace the culture of their ancestors but continue to assemble into the cultures of their own communities.

Translation: "Today I was proud to celebrate my first civil wedding as a councilor. Even in difficult moments like the ones we live in, there is always time for love. Congratulations to the newlyweds!"

Translation: "Congratulations to the couple! This is the Madrid of today: Diverse, free, and inclusive!"

For the first time in #Madrid a #Muslim councilwoman, wearing a hijab, officiated on Friday a #LGTB wedding and declared herself proud of it. @MaysounDouas, member of a left-wing party, said her gesture will promote debate among Muslims on democracy & citizenship values. #İslam pic.twitter.com/1dQVOUELuM

The politician from the Más Madrid party was the first Muslim Hijabi woman elected as councilor in Madrid in May 2019 and calls herself a "Muslim feminist, an entrepreneur, a social activist, and an innovation expert," as she holds a PhD in physics.

Translation: "A great first in Spain. Of Moroccan origin, Maysoun Douas, a scientist by training and mother of 4 children, contributes by this gesture, which has symbolic value, to relaunching the debate on the place of homosexuality in the Muslim religion. Well done."