Qatar Just Cancelled Mashrou' Leila Because of Anti LGBTQ+ Pressure. What Does this Mean for World Cup 2022?

Two weeks after Northwestern University in Qatar announced it's hosting a talk with the Lebanese music band Mashrou' Leila, the university released an updated statement stating the event will be relocated to its Evanston campus in Illinois, without providing further explanation.

Both the decision to host and to cancel the event have proved controversial, with some suspecting the reason being that members of the band are openly gay. 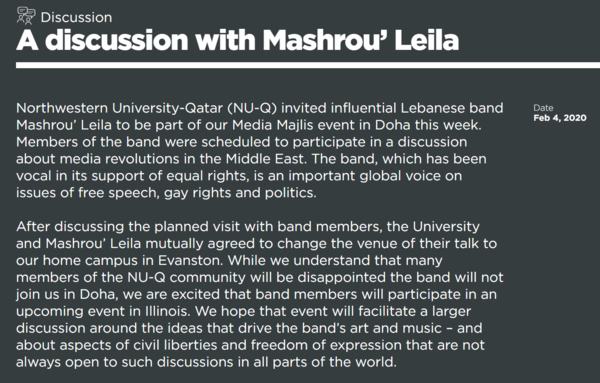 In its statement, the university's media committee explained that the decision of relocating the discussion to a US venue was taken mutually between the institution and Mashrou' Leila, a band that is quite vocal in defending LGBTQ+ rights, especially that their lead singer Hamed Sinno is openly gay.

But the statement was far more vague than the discussions taking place online. Some Qatari social media users have been protesting the university's decision to host the band, saying that their community doesn't support LGBTQ+ rights and that their laws "shouldn't allow such events."

Excuse me @NUQatar
If you believe that this band
is an important global voice on issues of gay rights, then invite them in your US campus NOT Qatar.
You had canceled this event, cause it’s not welcomed by us, not for any other reason.
Again, our religion is RED line. pic.twitter.com/5uSK8YUrJ7

As soon as the hashtag #نرفض_محاضرة_مشروع_ليلى (We refuse Mashrou' Leila's discussion) began trending, a Qatari journalist reported that he contacted officials in the Qatar Foundation, a semi-private NGO dedicated to Education, Science and Community Development, to ensure that they exert every effort to stop the event out "of respect to Qatar's customs, traditions, and laws."

Translation: "I've contacted the Qatar Foundation about the calls against Mashrou' Leila's discussion and they confirmed that they are communicating this to Northwestern University and that they too think this event doesn't align with Qatar Foundation's message to respect Qatar's customs, traditions, and laws."

Commentators highlighted a wider issue: canceling this event under social pressure raises questions about the country's ability to host the 2022 FIFA World Cup since the country will be hosting hundreds of thousands of football professionals and fans, among which many members of the LGBTQ+ community.

How are Qataris going to handle hosting the fifa world cup in 2022... attended by LGBTQ people and where people get shitfaced drunk... when they can’t handle 1 gay person coming to talk at an American university lol

wait, universities in Education City don’t have to abide by Qatar laws anyway, so on what grounds are locals trying to shut down Mashrou Leila’s lecture? #نرفض_محاضرة_مشروع_ليلى

While LGBTQ+ relationships are still illegal according to Qatari laws, Qatari officials have assured that football fans will be welcomed in the country regardless of sexual orientation, while simultaneously stressing the importance of showing respect to the conservative's country's traditions.

We are looking for an official apology and a promise to respect Qatari values.

Last September, chief executive of the FIFA World Cup Qatar 2022 Nasser al-Khater says he wants "any fan, of any gender, orientation, religion, or race to rest assured that Qatar is one of the safest countries in the world and they’ll all be welcome here," adding that "public displays of affection are frowned upon, it’s not part of our culture, but that goes across the board to everybody."

Simple.
We dont show affection on streets whether straight or not and u know this is the culture in almost all Arab countries.
So the same should be applied during the world cup.

It doesn't matter to me whether or not they come here, but I'm so curious now to know more about the band: their ideas, why religious societies fear them this much & whether they are really promoting a new ideology against the social norms.