Referring to a TV Show: US Official Hints at Normalization Between Israel and ‘The Big Fish'

Published June 23rd, 2022 - 07:59 GMT
Saudi has repeatedly denied reports of possible normalization with Israel before a peace agreement with the Palestinians. (Shutterstock: ekavector)
Highlights
Barbara A. Leaf is the United States Assistant Secretary of State for Near Eastern Affairs

During a Congress hearing by the House Foreign Affairs Committee on the Biden Administration's Policy Objectives in the Middle East and North Africa, the United States Assistant Secretary of State for Near Eastern Affairs Barbara Leaf referred to an Israeli TV show to support her claims that Saudi Arabia can soon join the Abraham Accords agreement between Arab states and Israel. 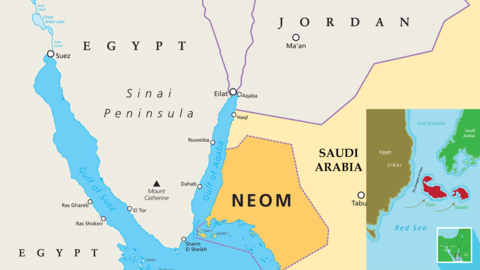 During the hearing, Leaf presented the Congress committee with a detailed request for a $7.6 billion bill for foreign assistance to countries in the Middle East and North Africa in 2022. Leaf justified the budget by saying it aims to achieve a three-folded goal, including maintaining key partnerships and supporting regional allies, de-escalating and resolving ongoing conflicts, in addition to strengthening and expanding relationships among the region's countries, and advancing American values.

Normalization between Israel and Saudi Arabia

Following the request, Barbara Leaf answered several questions by Congress members over the US policy in the Middle East and North Africa, including inquiries over whether or not the Biden administration is working on expanding the Abraham Accords to include more Arab states, namely the Gulf's largest, Saudi Arabia.

Leaf confirmed US plans to bring more countries to the normalization agreement with Israel, saying the upcoming visit by US President Joe Biden to the region, his first as commander in chief, will focus on achieving larger reconciliation among different parties.

Leaf also highlighted the Biden administration's plans to deepen normalization levels onto ones among nations of the region, rather than being limited to ties between governments.

Naming Saudi Arabia as the biggest aim, Leaf said Saudi Arabia's normalization with Israel is an ultimate aspiration, calling it "the big fish".

As an example of how this goal might be close to achieving, the US official said she "was told that one particular Israel series, Fauda, is one of the most widely viewed series in Saudi Arabia". Leaf then added, "there is already this knowledge of each other that is growing in the public".

Leaf's claim of Fauda's popularity in Saudi Arabia has not yet been supported by official reports, even though the show was among the most-watched in neighboring UAE in 2020.

The United Arab Emirates and Bahrain were the first to sign the Abraham Accords normalization agreement with Israel in September 2020, which was highly promoted by the former US administration of Donald Trump.

Scoop: The White House is working on a “road map for normalization” between Israel and Saudi Arabia. My story on @axioshttps://t.co/VG9Ie071Be

In response to frequent questions on prospects of joining the accords, Saudi Arabia government sources repeatedly denied plans to join the agreement, stressing that the Saudi government will "only normalize ties with Israel based on the 2022 Arab Peace Initiative proposed by the late King Abdullah of Saudi", which links normalization between Arab states and Israel with the Israeli acknowledgment of an independent Palestinian state at the 1967 borders.

This stance has been rumored to change during the last few months, especially as Joe Biden prepares to make his first Middle East official trip in July 2022, during which he is supposed to meet with several Arab leaders in Saudi Arabia.