The 'Russia’s Trump'? Who is Vladimir Zhirinovsky?

Published April 7th, 2022 - 07:24 GMT
In this file photo taken on June 24, 2020 Vladimir Zhirinovsky, leader of the Liberal Democratic Party of Russia (LDPR), walks on Red Square after a military parade, which marks the 75th anniversary of the Soviet victory over Nazi Germany in World War Two, in Moscow. (Photo by Yekaterina SHTUKINA / SPUTNIK / AFP)
Highlights
Vladimir Zhirinovsky, who is a Russian politician, died of Covid-19 complications after months of suffering

Russian Ultra-nationalist Politician Vladimir Zhirinovsky passed away aged 75, yesterday, following a COVID-19 infection. The Russian politician claimed earlier that he has been jabbed 8 times against the virus. 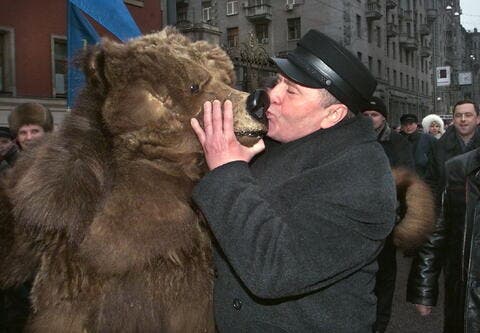 According to the chair of the State Duma, Vyacheslav Volodin, Zhirinovsky died following a “difficult and long illness.”

I would normally never post faces of these scumbags, unless they died. Well, Vladimir @Zhirinovsky is dead from COVID-19 complications, I believe he was PROUDLY vaccinated with Sputnik V 8(?) times.

I hope hell exists so you suffer in eternal agany forever, you piece of shit. https://t.co/3yyRfo6371

Various reactions emerged on social media platforms following the politician's death; some were happy to hear the announcement of his death writing "you won't be missed" and Vladimir Zhirinovsky is apparently dead. Good. I hope someone desecrates his grave." While other people paid tribute to his role in the Russian political system and called him a 'LEGEND'.

What made the ultra-nationalist politician's death even more controversial is that earlier this year people claimed his death twice, but then all allegations were refuted by the Russian authorities and his family.

Isn’t this the second time he’s been dead recently? https://t.co/RfXqyU07rw

According to media sources, the Russian Liberal Democratic Party (LDPR) leader, the six-time presidential candidate and an MP in the Russian parliament had predicted, in a speech on December 27, 2021, almost the exact date of Russian troops' invasion of Ukraine.

"It will be a year when Russia becomes great again." the Russian politician said hinting at the invasion of Ukraine. He added: "At 4 am on February 22, you will feel [our new policy]. I would like 2022 to be a peaceful year."

In an interview with BBC journalist Steve Rosenberg, who shared a video on his Twitter account of an old interview with the politician, Zhirinovsky said when asked about Ukraine: "In Ukraine, you must know it's our earth, it's our people. And you must forget Ukraine."

Recently, Zhirinovsky has become especially popular on the Web, he was called a "prophet" because of this video in which he says that 2022 "will not be peaceful" - everything will change at 4 am on February 22
RIP pic.twitter.com/5LC2g6TYL1

Furthermore, some people have launched the nickname “Russia’s Trump” in reference to Zhirinovsky. Following Trump's election victory in 2016, Vladimir Zhirinovsky celebrated with a champagne party.

In Nov, 2016, when the lunatic fringe in the US was lying AGAIN about American Muslims having cheered on 9/11, I wondered who abroad was cheering for Trump's victory.

Vladimir Zhirinovsky also regularly made antisemitic and sexist comments, according to The Guardian, one time the Russian politician suggested during a press conference that his aides should rape a pregnant journalist. He was known for his controversial ideology and for his advocating for Russia's military actions against the West.

Zhirinovsky was a Russian ultranationalist politician and the leader of the populist Liberal Democratic Party of Russia (LDPR) from its creation in 1992 until his death. He was a member of the State Duma since 1993 and leader of the LDPR group in the State Duma from 1993 to 2000, and from 2011 to 2022.