On Monday, Syrian teacher and story writer Ghadeer Salam was reportedly found dead along with his three young daughters in their home in Tartous to the northwest of Syria. Despite Salam posting a suicide note on Facebook at the same time of the crime taking place, many expressed their suspicion that the writer and his daughters were rather killed by the person who posted that Facebook note.

Translation: "Mystery circulates the death of Syrian Writer Ghadeer Salam and his three daughters in Tartous city. Informed sources say the father was killed by four bullets one of which is in his back, which goes against the suicide narrative."

On his Facebook account, the 54-years old writer had posted a controversial statement in which he said that if people are reading it that means that "he has killed his three daughters and committed suicide;" saying that his motive is to escape a work partner who was repeatedly threatening his life in response to his inability to finish a task on time.

Translation: "How could he possibly kill his daughters; ending their lives and dreams? Syria has indeed become a jungle no one can live in." 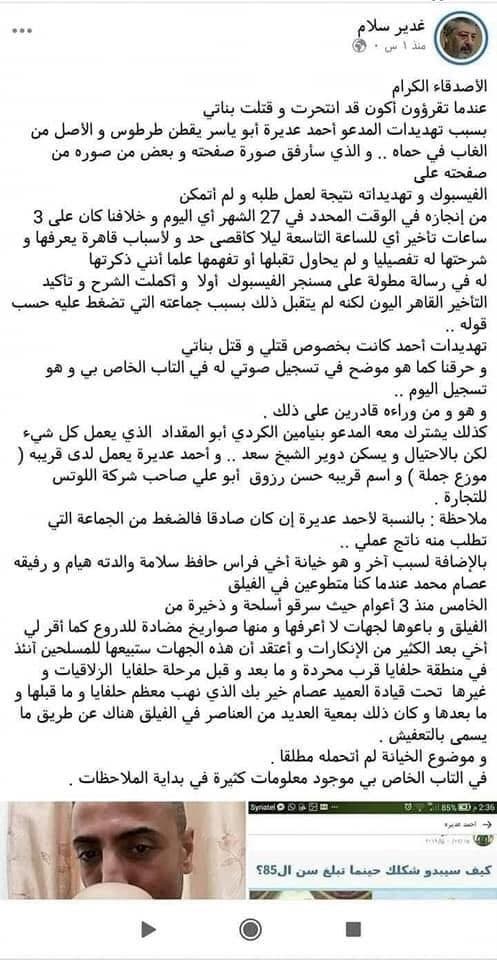 However, the Facebook post was briefly taken down as questions arose over the actual perpetrator of the crime, especially that Salam's wife was injured during the shooting but didn't pass away as the rest of the family, which suggests that whoever wrote the post on Facebook knew for sure the consequences of the shooting.

Additionally, sources that couldn't have been verified by Al Bawaba have confirmed that Salam was killed by four bullets, one of which settled in his back, which defies the suicide claim.

Salam's daughters were identified as 22-years old Shaimaa, 20-years old Khuzama, and 17-years old Shaden. The mother is reportedly revoking from her injures at the hospital and is expected to offer valuable information regarding the crime over the coming days.