A Chinese court sentenced a Uyghur woman to over a decade in jail for teaching Islam, hiding copies of the Quran inside her house, Radio Free Asia (RFA) reported.

The Uyghur woman, who was living in Xinjiang region and was abducted around 4 years ago, was given a 14-year jail term for providing religious instruction to children in her neighborhood and hiding copies of the Quran, local police revealed.

Uyghur woman sentenced to 14 years for teaching Islam and hiding copies of the Quran https://t.co/0fFrKEuGRI

According to sources, Hasiyet Ehmet has disappeared since she was abducted by authorities in May 2017. It was said that the Uyghur woman was taken by force by the police after they broke into her home and put a black hood over her head. They also denied her request to put on other clothes or take her medicine.

An official who is familiar with the case stated: “It was because of teaching kids the Quran and hiding two copies of Quran when authorities were confiscating them, and later getting caught.”

Hasiyet Ehmet, an #Uyghur women from #Xinjiang has been prisoned for 14 years. Her only crime was teaching kids #Quran & hiding two copies when authorities were confiscating them.
The #Chinese Communist Party #CCP wants all to worship Xi Jinping and no one else.#UyghurGenocide https://t.co/LX153SztPe

Hasiyet was arrested along with some of her neighbors and held for 15 days after questioning, said the chairman of the local neighborhood committee, a grassroots-level organization in China that monitors residents.

Authorities arrested her twice in  September where she was sentenced during the second arrest for 14 years. 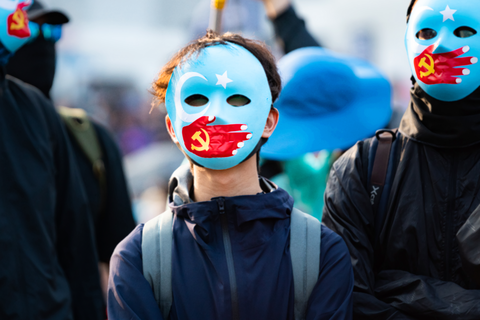 Nine years before her arrest, Hasiyet’s husband was convicted of “separatism” charges and sentenced to life in prison in 2009, the source said.

In fact, the attacks against the Muslim minorities are not new, the Chinese authorities are always targeting Uyghur businessmen, intellectuals, and cultural and religious figures in the Xinjiang Uyghur Autonomous Region with the aim to monitor, control, and assimilate members of the minority group purportedly to prevent religious extremism and terrorist activities.

Israeli Soldiers Handcuff, Beat an 80-Year-Old Palestinian and Leave Him For Dead