Published August 25th, 2022 - 05:11 GMT
A video which is believed to be for the Moroccan King in Paris. (Twitter/ Video screenshot)

A video, which was widely shared on social media, is believed to be for the Moroccan King Mohammed VI on one of the streets in the French capital, Paris. However, the date of the video was unclarified but was shared by dozens yesterday night under the hashtags '#محمد_السادس and #ملك_المغرب' - Mohammed VI and King of Morocco. 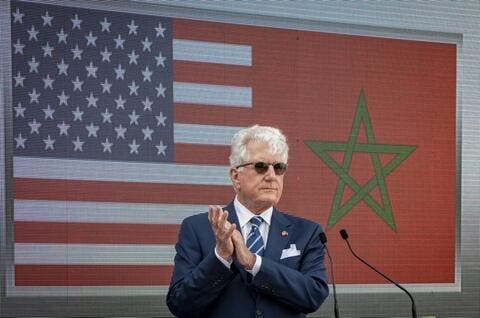 The King of Morocco is drunk on the streets of Paris #محمد_السادس#ملك_المغرب_سكران#المغرب #Maroc #Morocco pic.twitter.com/TL17kYI3sE

The 5-second video for the Moroccan King, who is also known as Amir al-Mu'minin, shows Mohammed VI reeling while he was wearing jeans pants and a shirt. The king was surrounded by his guards who were also wearing unformal uniforms.

In the short clip, the Moroccan king was seen walking in one of the streets in Paris and was reeling while drinking which caused people to think that he is super 'drunk', tottering around while his men were trying to support him.

A video is going around of Moroccan King Mohammed VI walking around the street, drunk and yelling. I'm really excited to hear all the raucous commentary against him for being an irresponsible leader - just like with Finnish Prime Minister Sanna Marin. That'll definitely happen!

One of the guards has clearly paid attention to the man who was shooting the video while in his car while quickly running toward him calling him to turn off the camera.

Social media users have criticized the video and slammed the king saying that he is an 'irresponsible leader'. However, others have slammed the backlashes against the King rejecting the claims that say he is the Moroccan king adding that he is someone similar to Mohammed VI.