Three policemen were caught on video attacking a teenage boy, who was identified later on as Hadi Abuatelah, in the Illinois city of Oak Lawn. The video has gone viral online and triggered anger as the cops were seen violently attacking Abuatelah when he showed no resistance. 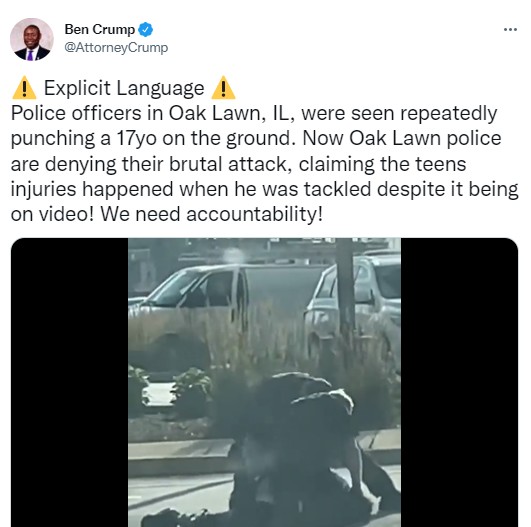 In the one-minute clip, who was taken by an unidentified person from a car, three policemen were seen violently punching the 17-year-old Hadi Abuatelah who is laying on the street. The video is believed to be taped outside one of McDonald's branches in Oak Lawn as its sign was notably seen.

The video has gained over 127.5K views in a few days as people were angrily sharing it disgracing the police's violent attack on the teenage Muslim boy. "This has to change," a Twitter person wrote decrying cops' method of arresting people.

Unacceptable. This has to change. https://t.co/bknqVAxxfD

On the other hand, some people said that the suspect, Hadi Abuatelah, was holding a gun in his bag as he refused the policemen's calls to stop and surrender himself and tried to take out his gun justifying that the three cops were trying to defend themselves from being shot by Hadi.

Oak Lawn police have released a statement defending the violent attack by its three cops against the teenage Hadi Abuatelah saying that he repeatedly punched the legs and head by three officers on Wednesday and he attempted to reach his bag in which he carried a gun.

He was running from the police with a gun in his bag. He tried to reach into that bag, refusing commands to stop. Would you prefer the officers shoot him? They would have been justified in doing so. https://t.co/VreUY4G4pS

On the other hand, a protest erupted across Oak Lawn as people have taken it to the street to condemn the police's violent attack against the little guy remembering George Floyd who died on May 25, 2020, at the hands of a policeman during an arrest in Minneapolis, Minnesota.

Hadi Abuatelah is suffering fractures to his face, skull, and pelvis and swelling of his brain, his mother Dena Natour and lawyers told a news conference.