For the first time since 2015, Palestinian group Hamas released a recent short video clip showing an Israeli captive in Gaza, Hisham al-Sayed, in a critical health condition and attached to a ventilator in a medical treatment room, sending a message to the Israeli government that they need to finalize a prisoner swap deal as soon as possible.

To verify that the video was filmed recently, the camera carefully filmed a TV monitor in the room, which displayed photos from the Qatar Economic Forum 2022 that was held between the 20th and the 22nd of June, 2022.

Hamas has also released photos of Hisham al-Sayed's Israeli-issued ID cards, including a transportation pass, which, according to Hamas, is usually provided for Israeli soldiers for free rides on buses operated by a bus company called Metropoline.

A specialized Hamas unit in charge of prisoners of war has published a video of an Israeli prisoner, Hisham al-Sayed, following a statement made yesterday that his health has deteriorated. pic.twitter.com/9l1DuThu0Z

Ever since his detention after he walked into the Gaza Strip in April 2015, the Israeli captive's family, a Bedouin Palestinian one, had urged Hamas to release him, denying that he was serving in the Israeli army and explaining that he was mentally unstable.

In response to the recent video, Israeli officials said the Israeli government will put every effort to release all of its captives in Gaza, "whether they were Jewish or Arab".

Translation: "Frankly, Israel is soon to be with no PM and will schedule its fifth elections, which means there will be no Netanyahu or time for deals. Hisham al-Sayed is not Gilad Shalit and, unfortunately, there is no public pressure supporting his case."

While the video released by Hamas has been interpreted as an attempt to pressure Israel into finalizing a prisoner swap deal before the Israeli captive's health situation gets more complicated, some people accused consecutive Israeli governments of "neglecting Hisham al-Sayed's case for nearly seven years", justifying this by the fact that "he is not Jewish".

Some online people also compared the Israeli non-stop attempts to release former Israeli captive in Gaza Gilad Shalit, who was in Hamas' hold between 2006 and 2011, to the little progress achieved in Hisham's case. 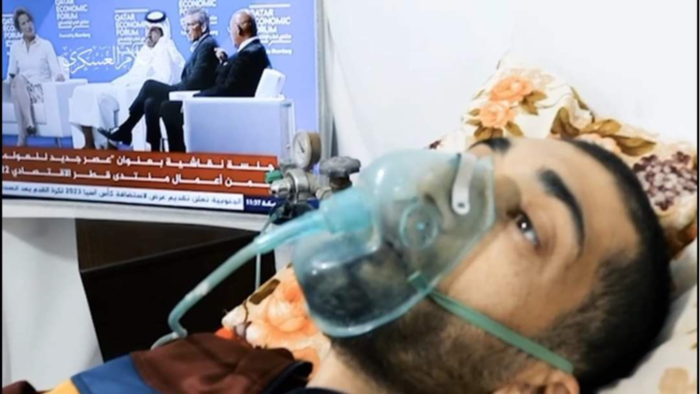 Hisham al-Sayed was arrested by Hamas alongside another Israeli citizen named Avera Mangistu as they walked into Gaza in April 2015.

In 2017, a statement released by Human Rights Watch called on Hamas, the militant group in control of the Gaza Strip, to release two Israeli captives immediately. The report then named Avera Mangistu and Hisham al-Sayed saying they "suffered serious mental health issues and that they had entered Gaza by mistake".

Moments later, Israel Hayom's diplomatic correspondent Ariel Kahana confirmed that Hamas has agreed to the suggestions but reported an Israeli rejection to allow Yoel Marshek to go to Gaza, citing unnamed Israeli sources who suspected the reliability of the video and stressing that "Israel will not be blackmailed by Hamas".

Hisham al-Sayed's family resides in the Bedouin town of al-Hura in the Negev while Avera Mangistu is an Ethiopian-born Jew who grew up in Ashkelon.

According to the latest figures, four Israelis are believed to be held by Hamas in Gaza; soldiers Oron Shaul and Hadar Goldin, in addition to Avner Mengistu and Hisham al-Sayed. Israel, on the other hand, detains a total of 4,450 Palestinians – including 160 children, 32 women, and 530 administrative detainees.