Anti-regime protests erupted in some of Iranian cities; people were seen chanting against the political rule in the country. The unusual part is that media channels are not really covering the rallies. 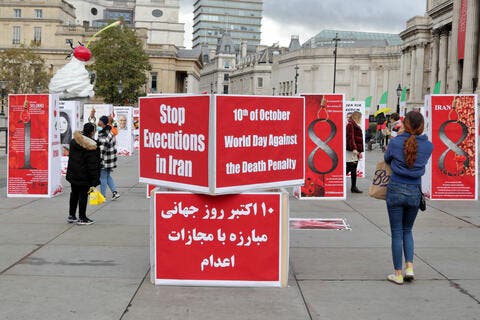 The protests have grown to reach the Capital Tehran as demonstrators were chanting: “Down with Dictator” in reference to the Iranian Islamic political rule.

According to sources, this is the biggest anti-regime protests in Iran in over a year. The rallies began southwest of the country 11 days ago and have continued till this day.

Several slogans were heard in the anti-regime protests including ‘Neither Gaza, Nor Lebanon, Long Live Iran,’ ‘Iranians die, they will not be humiliated’ and ‘Mullahs get lost.’

The deputy governor of the Iranian capital region, Hamidreza Goudarzi, is believed to know about the demonstrations in Tehran.

Iranian journalist and women right activist, Masih Alinejad, announced support for the anti-regime protests saying rallies have started in Khuzestan to reach the capital involving ⁦Iranians⁩ of all ethnic backgrounds.

Today people into the wrong took to the streets and chanting against dictator.

11th day of protests across ⁦ #Iran⁩ spread to ⁦ #Tehran⁩. These protests began in Khuzestan and have involved ⁦ #Iranians⁩ of all ethnic backgrounds.

Maryam Rajavi, who is the head of the People's Mujahedin of Iran which is an organization trying to overthrow the Iranian government, remembered people killed in the latest protests in Khuzestan where the anti-regime demonstrations started.

State media said 8 people have been killed since the start of the protests in Iran. Yesterday, in the Kermansha area, Iranian security forces opened fire on protesters to halt the rallies.

Mass protests tear through #Iran as citizens express anger over the govt’s mismanagement of water supplies. Instead of battling the water crisis, the govt wages war on the internet & mobile data. Iran continues its post-revolution descent into poverty.pic.twitter.com/IKOxLdG2BI

Viral hashtags are trending on Twitter such as #IranRegimeChange, #Iranprotests, #watercrisis and #Khuzestan.

In Brussels, demonstrations in support of the Iranian uprising were held. People were seen carrying national flags and banners with the picture of Maryam Rajavi and statements reading Iran regime change is the only solution for crisis in the country.

Iran is currently suffering the worst drought in over half a century which is affecting households, agriculture, livestock farming, and leading to power outages.