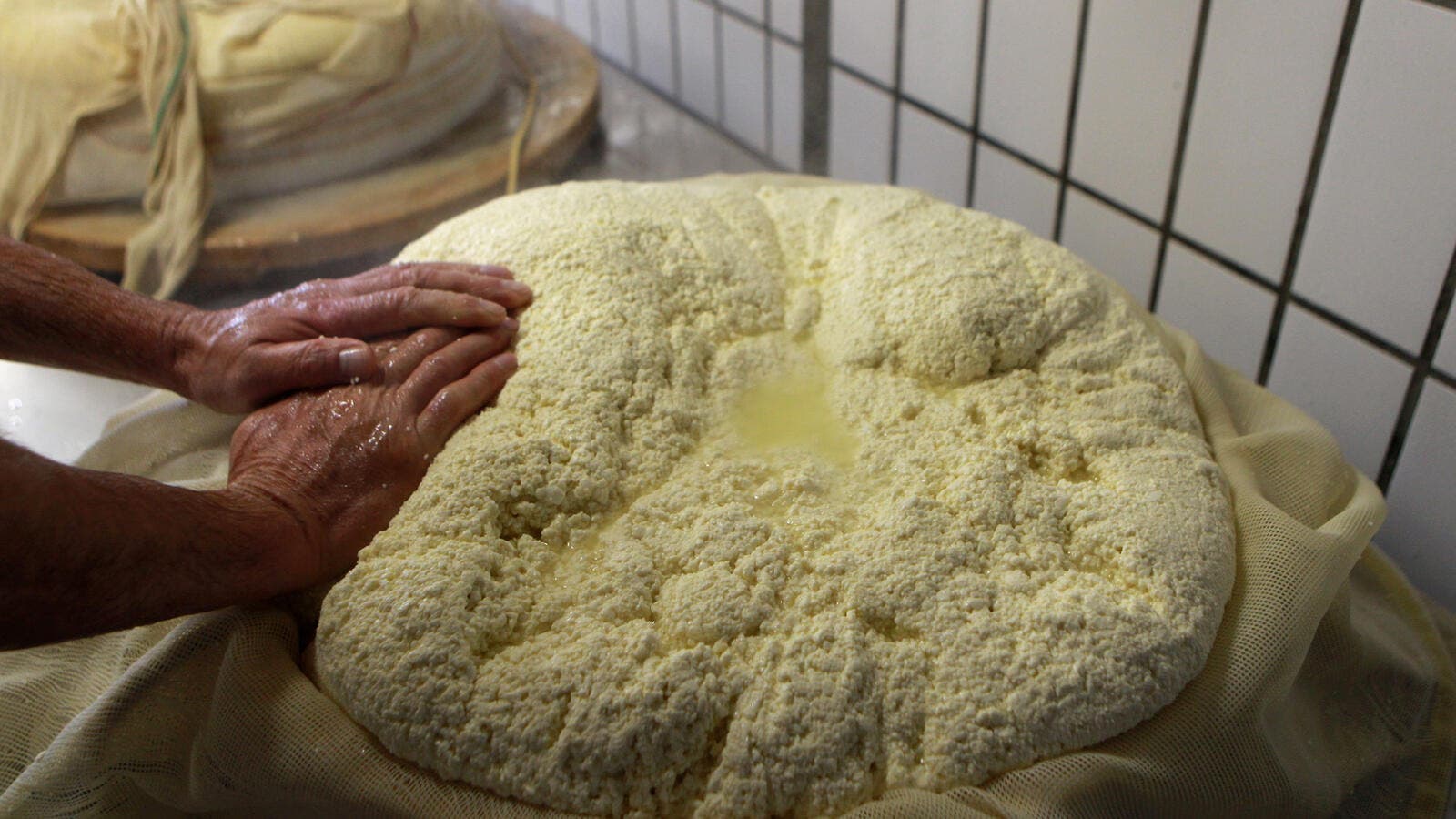 Cheese from markets in Taiz as Awshaqhi cheese as well as Arafi is the most popular nationwide and sold abroad to Gulf states.

Customers buy the cheese from different local markets for either domestic consumption or as gifts for foreign friends.

Ali Qaseem, a shepherd who produces a celebrated variety of cheese in the Araf area of Maqbanah, said, “The price of cheese tends to decrease in the summer because of the fertility of farms and the heavy rains, which lead to the increased production of milk.  In the winter, the price of cheese increases due to a lack of water and grass for grazing.  Nevertheless, the price of a piece of cheese usually varies between YR 400 and YR 4,000, depending on its size.”

Abdullah Alshamiri, a cheese merchant in the Shineni market of Taiz, said “There are two different kinds of cheese that we buy from producers, generally ranging between YR 1,500 and YR 3,000.”  He also said that many of his weekly clients are connoisseurs who select products on the basis of quality, size and hygienic standards.

According to Mohammed Sulatan, who also works at Shineni market, customers usually buy sheep’s cheese more often than cow’s cheese.  Prices  differ from market to market and is highly dependent upon quality.  The highest price for one of his cheeses is YR2,000, while the cheapest is YR 500.

Zaid Ahmed Al-Madari, a cheese merchant at Barah market, emphasized that “The cheese brought in from Araf is of the highest quality because it is produced from livestock milk and is extremely fresh.  It usually remains on the market for no longer than three to five days.  The cheeses from Awshaqh are next and they can remain fresh for months, especially when stored in cold places.”

Al-Madari continued by saying that, “We receive weekly shipments of Sawaba cheese from the shepherds of Araf and Awshaqh.  Sawaba refers to a variety of cheese that takes one week to produce.  Its sales are dependent upon the availability of quality livestock milk.”

Zaid Mutea Al-Thurafi, another cheese merchant in Barah market, believes that Awshaqhi cheese – not Arafi – is the most popular nationwide.  He also sells this variety of cheese to clients in Saudi Arabia, mostly during holidays and on special occasions.

Yaseer Ghaleb, a shopper at Barah market, said that “Cheese usually arrives on a daily basis from Maqbanah and Mauza directorates.  Awshaqhi cheese is sold on Saturdays and Sundays, while Araf varieties are sold on Monday, Thursday and Friday.”

Cheese zahauik is a mixture of cheese and tomatoes.  In Taiz, many youth make it every day, as it is a key ingredient in fish dishes.

Bab Mousa is one of the most famous places in Taiz where cheese zahauik is consumed, mostly by workers, students, qat chewers and security forces.  Citizens of the upper classes tend to eat it at restaurants downtown, though cheese zahauik is generally an ingredient for the poor.

Naturally, women play their own part in the production and marketing of Yemeni cheese, eggs and margarine.  For example, Mariam and her 12-year old daughter Fatima sell cheese in a rural market.  She said that she chose to sell Sawaba cheese because of its high quality and the excellent price that it commands.  She said, “My cheese is hugely popular because it is fresh and usually made from livestock milk.  It generally costs between YR 500 and YR 1,000 for a single piece.”

Mariam lives in Shameer village in Maqbanah directorate.  She earns a living for her five family members and has 10 livestock that she milks every day for her own personal wealth.  It’s an excellent example of how some Yemeni women are combating poverty in their households.

Aisha Alrai, a cheese-maker, describes the steps of cheese-making in this way: “The process must take place very quickly.  You milk the livestock and divide the milk into several containers.  You then add several drops of fahl, which is milk taken from baby livestock that have been killed and left for fifteen minutes.  After that, the chemical reactions begin and the milk starts to deposit.  After one day, the cheese is removed from its container and left to dry in a room made of palm fronds for a whole week.  Salt is then added as a preservative.  Finally, the cheese it put through a process of kapi, which means that it is smoked on the wood of a sidr tree, so as to give it a good smell.  A similar process is employed when making yogurt, so as to give it a unique flavor.”

Aisha doesn’t sell her cheese to any particular merchant, but rather to the inhabitants of neighboring villages.  She has a total 150 livestock and she moves constantly, so as to ensure that her animals have proper water and grass.

Hasan Abduh Bagash, a former member of the local council in Maqbanah directorate, told the Yemen Times that “Many areas in the directorate are famous for cheese-making.  A research team from the French organization DYA has done studies in the region so as to learn how the industry might develop.  One member of the team has said that the study will be handed over to the Ministry of Agriculture, as well as to a European Union program that supports Yemeni cheese-making.  She also recommended that we support the industry by establishing a laboratory, which DYA is unfortunately unable to do.  As such, we must fund such a laboratory ourselves.”n Taiz governorate, the most famous cheese-producing villages are Araf, Awshaqh, Akhuz, Bargah, Barah, Jumah, Mukyas, Suayra, Kamb and Hajda.