After an honorable journey all the way to the Wimbledon semi final, Tunisian Ons Jabeur lost to Aryna Sabalenka. 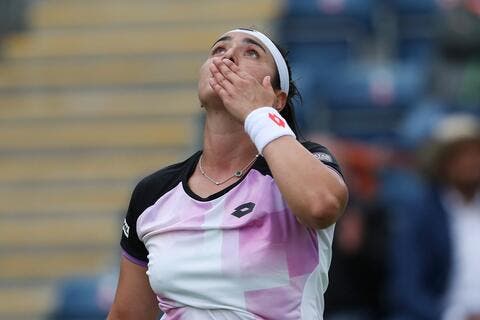 " Jabeur arrived at Wimbledon having never played on Centre Court and she has charmed each crowd she has performed before with her creativity, showmanship and her willingness to live and die by her drop shots. Wherever she goes next, history will follow," The Guardian.

Leaving @Wimbledon with the head up and really proud of myself.

Special thanks to my team, to all the people involved and to all my fans around the world! Love you guys 🙏 #TeamOJ pic.twitter.com/tCOmGfO9uq

Ons Jabeur (born 28 August 1994) is a Tunisian professional tennis player. She has a career-high ranking of No. 24 by the Women's Tennis Association (WTA). At the 2020 Australian Open, Jabeur became the first Arab woman to reach the quarterfinals of a Grand Slam tournament. She is also the highest-ranked Arab player in WTA history and current No. 1 African player.

Jabeur has won eleven singles titles and one doubles title on the ITF Circuit. She has reached two WTA finals, including one at the Premier-level 2018 Kremlin Cup in Russia.

Jabeur was first introduced to tennis at age three by her mother. She reached two junior Grand Slam girls' singles finals at the French Open in 2010 and 2011, winning the title in the latter. She is the first Arab player to win a junior Grand Slam singles title since Ismail El Shafei won the Wimbledon boys' title in 1964.

After nearly a decade playing primarily at the ITF level, Jabeur has become more of a mainstay on the WTA Tour beginning in 2017. She was named the Arab Woman of the Year in Sports in 2019. She won the first title of her career at the 2021 Birmingham Classic by defeating Daria Kasatkina, thus becoming the first ever Arab and Tunisian female tennis player to win a WTA title.