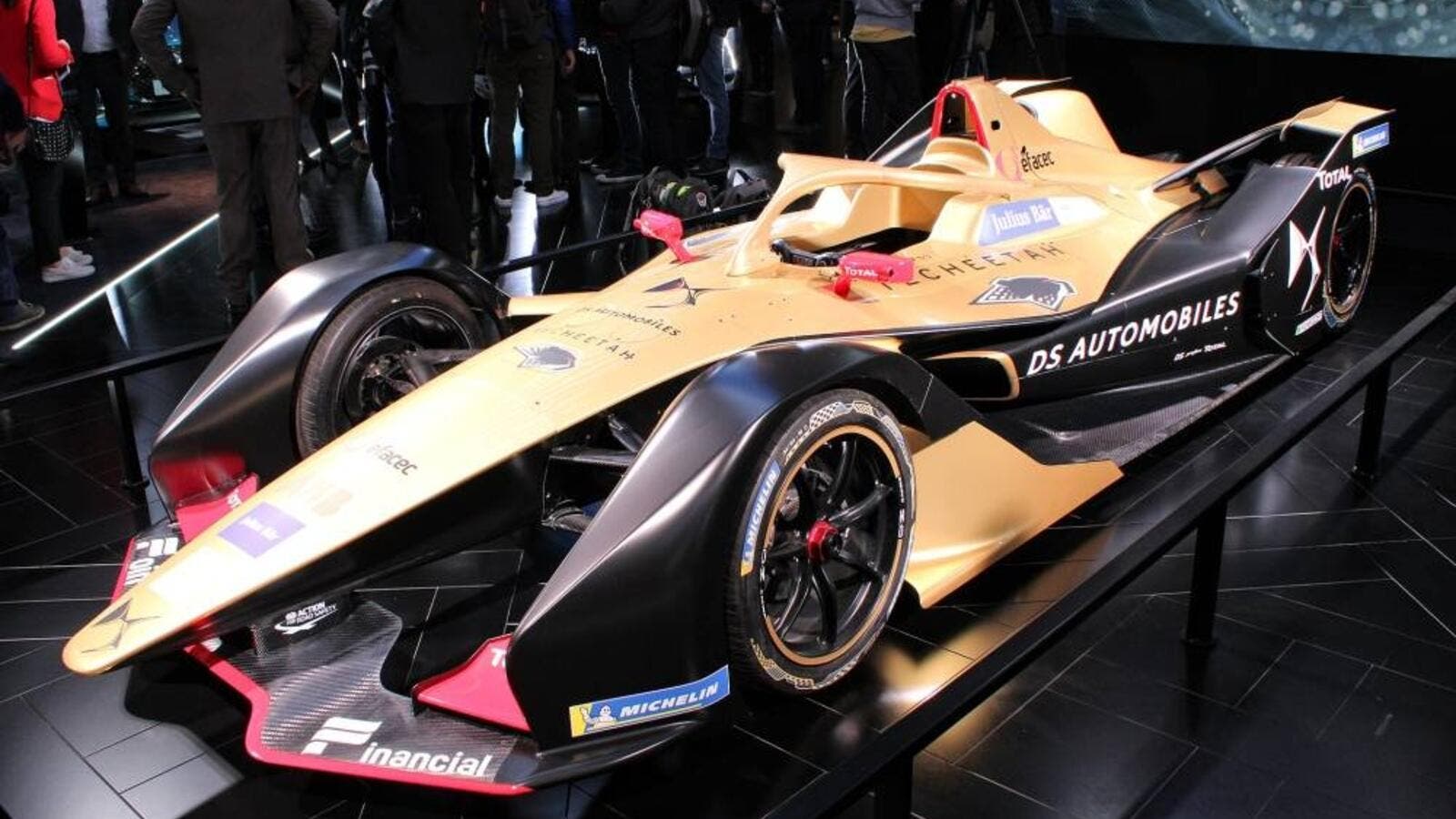 The Spark SRT05e (pictured in black and gold Techeetah livery at the 2018 Paris Motor Show) made its Formula E competition debut in the Diriyah E Prix. — Courtesy photo

Formula E fans got a tantalizing look at what the Diriyah E Prix has in store as all 12 teams lined up at the Ricardo Tormo circuit in Valencia, Spain, on Oct.15 -18.

The teams took part in pre-season testing in preparation for a year that will start with two consecutive rounds on the Diriyah Circuit on Nov. 22 and 23.

The teams have been busy preparing for the new season that will feature the same Gen2 cars as the previous year with both attack mode and fan boost features being used for the second year in a row.

Unlike the grueling Diriyah Circuit that is a 1.5-mile track with 21 turns the Ricardo Tormo Circuit is 2.48 miles long with only 14 turns in total. The long straights of the track give the drivers more opportunities to test out high speeds in their cars without the worry of the fast-approaching bends they would face in Diriyah.

In his comments after the pre-season testing in Valencia, Prince Abdul Aziz Bin Turki Al-Faisal, chairman of the General Sports Authority, said: “When I look at the lineup at Valencia, I get even more excited about this year’s season opener. Last year, the season started off with the Diriyah E-Prix, this year the first two rounds of the season will be hosted in Saudi Arabia. This only shows the fast pace growth Saudi is having as a regional hub for motorsport and sport as a whole.”

DS Techeetah team’s Jean-Eric Vergne won the 2018-19 season championship making him the first Formula E driver in history to win multiple driver championships. This year, all eyes are on the Vergne and DS Techeetah team as well as the new joining teams of the Formula E season, Porsche and Mercedes-Benz EQ.

Last year’s Diriyah E-Prix winner DS Tcheetah driver Antonio Felix Da Costa said: “I’ve got a new team and a new car this year. We’ve had a great start together in Valencia and I’ve got a very good feeling about this season. It’s great to be back starting the season in Diriyah and I’m looking forward to testing out the DS E-TENSE FE20 for the first time in a race environment and on one of the best tracks of the year.”

“Diriyah offers a historic double-header so we have double the points to seek and double the entertainment to offer the crowd. Winning the first race of the season there last year was a fantastic feeling and I hope to replicate that.”

This year’s championship starts with a doubleheader at the Diriyah E-Prix which is part of a group of major global sporting events that span across a short period of five weeks, dubbed as the Diriyah Season. These events include the Clash On The Dunes — the first-ever World Heavyweight Title fight in the Kingdom, on Dec. 7, the Diriyah Tennis Cup, the first professional tennis tournament ever to be staged in Saudi Arabia from Dec. 12 to 14, and the Diriyah Equestrian Festival 2019 (DEF), which will see the world’s best equestrian athletes compete in two weekends of elite sportsmanship, on Dec. 12,13 and 14; and Dec. 19, 20 and 21.

All these events will be accompanied by multiple music festivals that showcase the biggest artists globally as well as many entertainment, cultural, food, and retails experiences that will make this season one of the most remarkable experiences visitors can get. This all comes at the same time as the launch of the new tourism visa by the Kingdom that is available at https://diriyahseason.sa/ where visitors can buy tickets and obtain their visas through a few clicks.

Tickets are available, starting from SR450 for single day grandstand, including grandstand seating with a view of all the action, access to the dedicated fan zone, the Allianz E-Village and off-track entertainment, and access to the post-race concert on the day featuring an international superstar. Two-day tickets are priced at SR800, representing a saving of SR100.

All Diriyah season tickets are available at www.diriyahseason.sa.