Mahrez Speaks Out on His Future with Man City

Published April 28th, 2021 - 10:19 GMT
The Algerian says he is loving life in Manchester and has his sights set on winning more silverware at the Etihad Stadium (Photo: AFP)

Riyad Mahrez has spoken out on his future at Manchester City while also revealing the most difficult moment of his career to date. 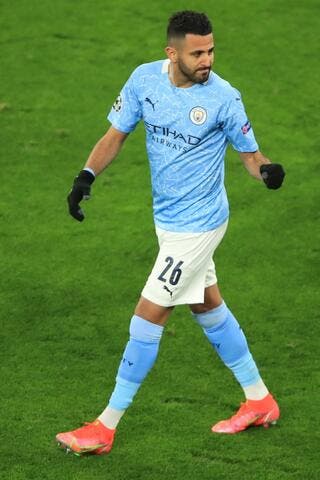 Mahrez has built on his reputation as one of the top wingers in the Premier League since completing a big-money move to the Etihad Stadium from Leicester in 2018.

The Algeria international has won the league title at City while also lifting the FA Cup and three Carabao Cups, and is only focused on their present pursuit of more major silverware despite approaching the final two years of his contract.

Asked if he plans to stay at the Etihad beyond the expiration of his current deal in 2023, Mahrez told a press conference on Tuesday: "I don't really think about this, I'm good here at Man City, I love the club, everyone around it, I love the city.

"I concentrate on the team and trying to win things together and we'll see."

The most testing period of Mahrez's City career so far came when they suffered a surprise quarter-final defeat to Lyon in the Champions League last season.

Pep Guardiola's side ended up finishing the campaign with only the League Cup to show for their efforts, but the 30-year-old is hoping they can go all the way in Europe this time around after booking a semi-final date with Paris Saint-Germain.

"It was a big disappointment last season when we lost the Champions League," Mahrez added ahead of the first leg at Parc des Princes in midweek.

'The problem is when we lost we went straight on holiday, so you're very disappointed and then you just have to think about next season and try to refocus.

"The seasons before we had to stay focused to win the league. I think last season was the biggest disappointment of my career to not go through to the semi-final and beat Lyon.

"It helped us a lot this season because we were so, so determined to go through. Obviously the last seasons as well but this year we had those experiences and I think we were much better."

What else did Mahrez say?

Mahrez also reserved some special words of praise for Guardiola, insisting he has earned his status as one of the best coaches in world football over the course of his illustrious career in management.

"He's done a lot of things for football," said the City star. "He deserves to be praised this way, we know how important he is for us. It's very good to hear these things.

"It's normal, he tries to help us a lot for the games, tactically he helps us a lot. He tries to give us all the good advice for the games, about the opponent we play. When we arrive at the games we are ready and know what to do."