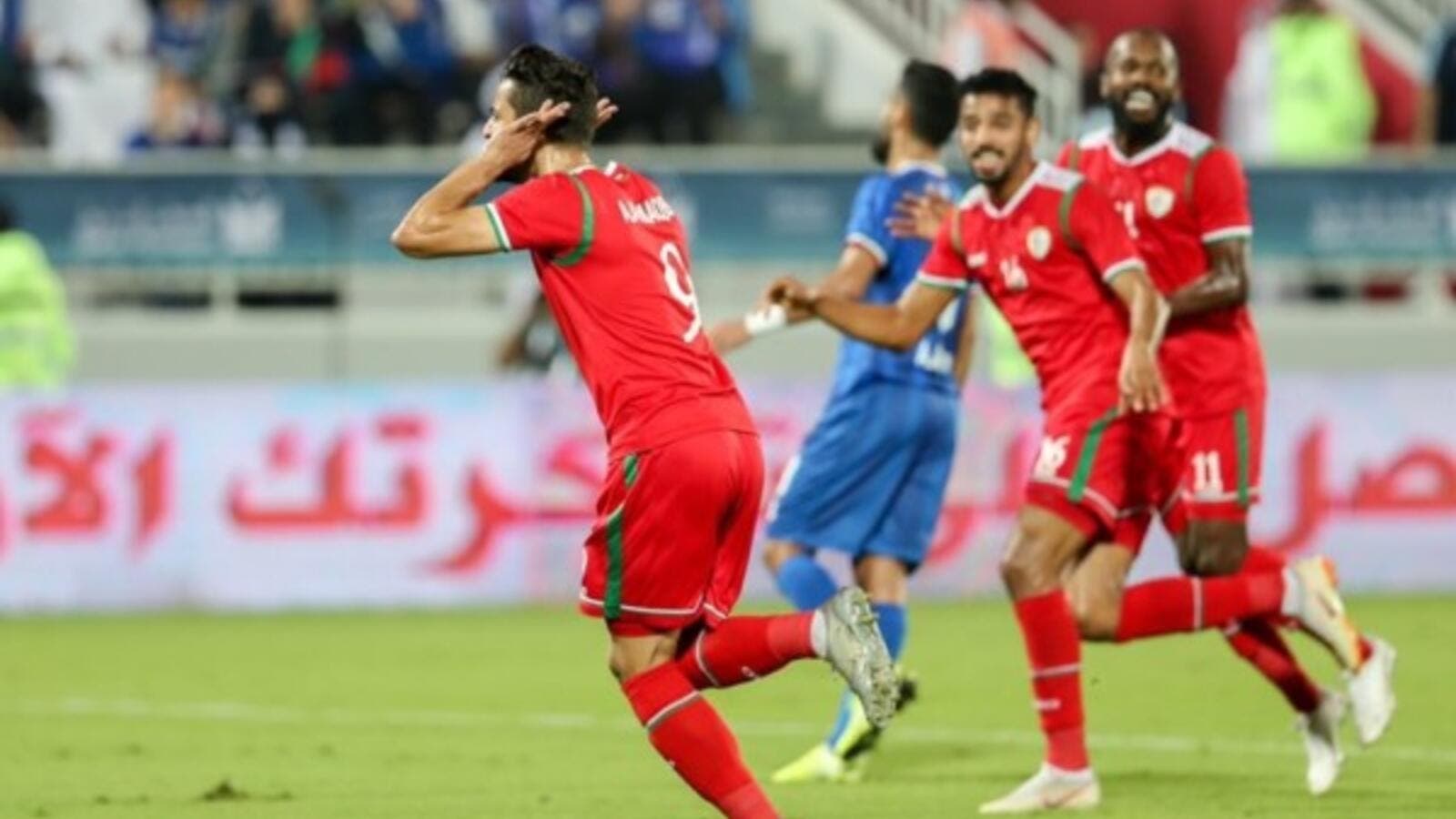 Oman picked up their first win at the 2019 Arabian Gulf Cup with a 2-1 win over Kuwait.

Abdulaziz Al Maqbali scored two first half penalties for Oman before Yousuf Sulaiman pulled one back to ensure a nervy finish.

Oman almost opened the scoring when a long ball launched from midfield evaded all of the Kuwaiti defenders and found Muhsen Al Ghassani in the box. He took a touch to control the ball but with the keeper bearing down on him, he could not convert.

It would not be long though before Oman opened the scoring. Mohsen Al Ghassani was brought down in the box in the 16th minute, but the referee turned to the video assistant referee (VAR) to make sure a foul had been committed.

The resulting roar from the Oman fans seemed to confirm that there had indeed been one, and Abdulaziz Al Maqbali nade no mistake in firing the ball low to the keeper's right and into the net to open the scoring.

In the19th minute goalkeeper Faiz Al Rushaidi suffered a head injury when he leapt to collect a long ball, but was okay to continue.

Oman's next goalscoring chance came in the 27th minute when Mohsen Al Ghassani was through on goal after a galloping run from the half way line, but his shot was too close to the keeper and easily saved by Hameed Yousef.

While the referee might've needed VAR to make sure of the foul that led to the first goal, he did not need it for the second. Goalkeeper Yousef charged into Al Maqbali when he ran into the box and another spot kick was awarded. He once again chose the same side and made it two from the spot, Oman taking a 2-0 lead into half time.

Kuwait did though have a couple of chances of their own. Soon after Oman doubled their lead, Ahmed Al Dhafery made his way past a static Oman defence but his shot was directed straight at Al Rushaidi.

In the 41st minute, he hoofed a shot wide when the ball came to him in an awkward manner, and in the fourth of five minutes, fired a powerful shot goalwards that Al Rushaidi did well to parry.

With Kuwait down by two goals at half time, coach Tamer Enad made a double change at half time, taking of Abdullah Al Buraiki and Fahad Al Ansari for Faisal Al Harbi and Mubarak Al Faneni.

However, the latter's time on the pitch would last for less than 15 minutes. Al Faneni suffered an injury near the Oman box and Enad was forced to substitute the substitute, replacing him with Shabib Al Khaldi.

The changes, though seemed to make a difference. Kuwait seemed more aggressive in the second half and Oman were required to be more defensively assertive.

In the 68th minute, dangerman Muhsen Al Ghassani came off, to be replaced by Arshad Al Alawi. He had linked up well with his teammates, also providing Al Mandhar Al Alawi two decent chances to score in either half.

Yousuf Sulaiman was particularly dangerous for Kuwait. In the 75th minute, he blazed over when put through, and was instrumental in winning his side a couple of consecutive corners, which Faiz Al Rushaidi did well to tip over, before reacting quickly to another shot by Al Dhaferi.

When Kuwait's response finally came, it was no surprise that Sulaiman was at the centre of it. He was put through on goal, and made no mistake in planting a shot that rolled past Al Rushaidi and into the bottom right corner.

The goal gave Kuwait a much needed shot in the arm, and galvanised the Kuwaiti supporters in the stadium, who outnumbered their Omani counterparts. Clapping, cheering and chanting for their team, the Kuwaitis took advantage of a suddenly nervous Omani defence to try and force home an equaliser, only for a last ditch tackle to avoid that happening.

The defence continued to express nervousness, and conceded a dangerous free kick in the first of five minutes of second half stoppage time, but captain Badr Al Muttaawa hit the ball into the wall and Oman held on for a win.

Oman's next game is against Saudi Arabia on the 2nd of December, the same day Kuwait play Bahrain.

When Was the First Meeting Between Ed Sheeran and Jeremy Loops?