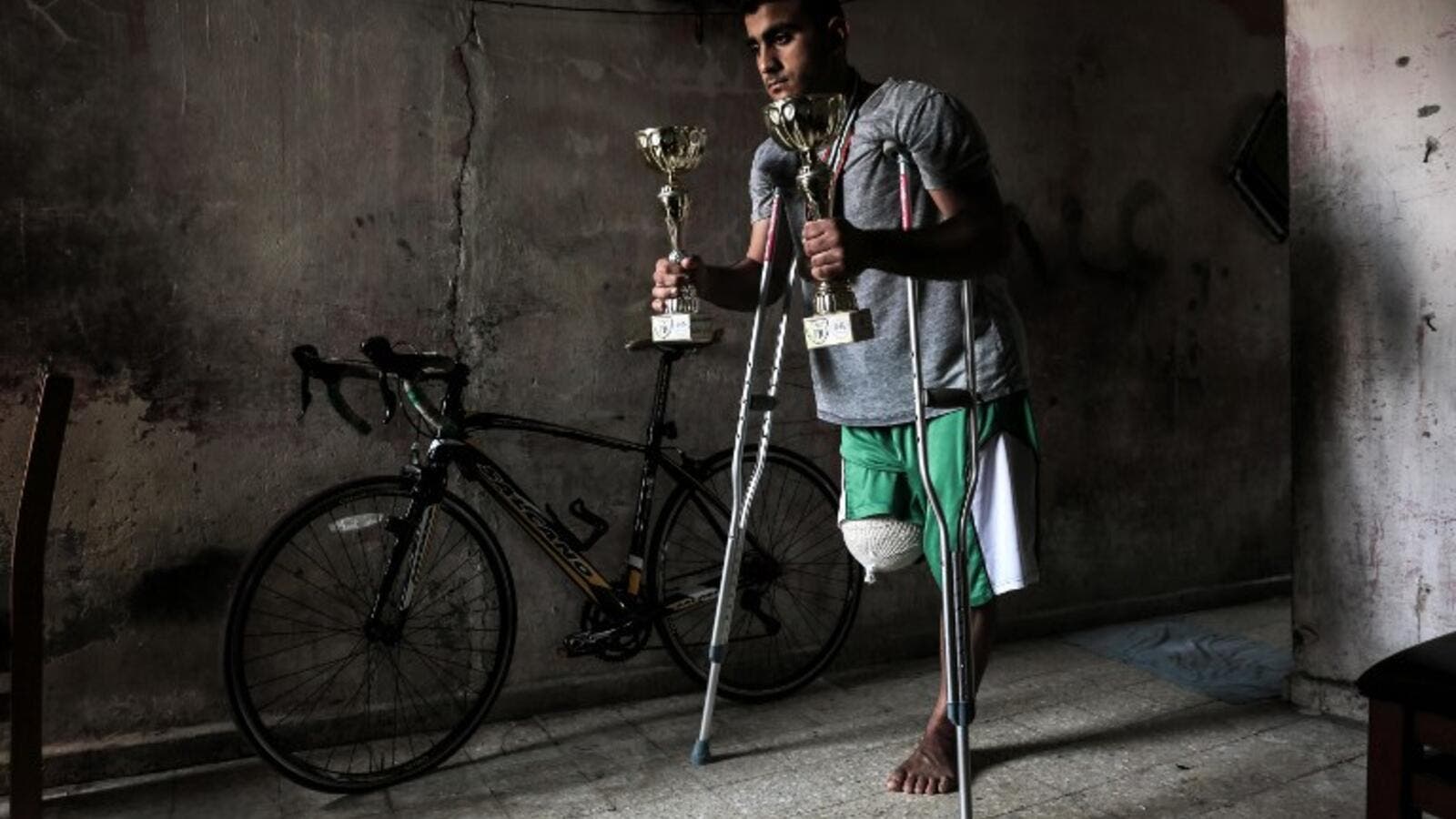 Palestinian cyclist Alaa Al-Daly, 21, who lost his leg by a bullet fired by Israeli troops along the Gaza border during a protest, stands next to his bicycle holding trophies he has won in competitions, at his home in Rafah in the southern Gaza Strip on April 19, 2018. Daly's dream of competing for Palestine at the Asian Games has been shattered after the athletes right leg was amputated after being shot by Israeli soldiers during recent demonstrations in Gaza. SAID KHATIB / AFP

Alaa Al-Daly, 21, had his right leg amputated after being shot during the first day of the 'Great Return March' protests which began on 30 March.

A Palestinian cyclist's dream of competing for Palestine at the Asian Games has been shattered because the athlete had his right leg amputated after being shot by Israeli soldiers during recent demonstrations in Gaza.

Alaa Al-Daly, 21, had his leg amputated after being shot during the first day of the 'Great Return March' protests which began on 30 March.

Tens of thousands of Palestinians, including women and children, gathered at sites throughout the Gaza Strip to take part in the demonstrations to call for the right of return for Palestinian refugees who fled or were expelled during Israel's establishment in 1948.

Israel deployed hundreds of snipers along the border, who opened fire on the crowds.

"I only went because it was a peaceful rally, I did not expect any harm to come to me," he told Reuters.

Daly said he was shot while 150-200 meters from the fence and was not involved in any perceived provocation against Israeli soldiers.

Israeli officials refused to grant him permission to exit Gaza for treatment in the occupied West Bank or Israel, his family said.

The Israeli military ruled that medical treatment would not be given to Palestinians who participated in the border protests.

Gaza has been under an Israeli blockade for over a decade, with residents banned from leaving the besieged coastal enclave.

Daly had previously trained for more than six hours a day for months to compete in the Asian games in Indonesia.

He said that his "dream of waving the flag of Palestine in Jakarta" is now over. The athlete said he is learning to walk with the help of crutches and wants to compete in the future as an amputee.

Thirty-four Palestinians have been killed in demonstrations along the Gaza border while thousands have been injured.

Seventeen people injured by Israeli snipers have needed amputations of either their lower or upper limbs, the Palestinian Ministry of Health in Gaza says.