Published May 27th, 2021 - 10:02 GMT
The Algeria winger tells Goal in an exclusive interview how he he is taking the pressure off himself ahead of the European showdown against Chelsea (Photo: AFP)

Having played a key role in Manchester City’s Premier League title success and scored three goals in a two-legged Champions League semi-final victory over Paris Saint-Germain, there is a good argument to be made that Riyad Mahrez is in the best form of his career.

“What do you think? You didn’t see Leicester?” he says to Goal as we sit down for a Zoom chat ahead of Saturday’s Champions League final against Chelsea.

The winger has a very good point. Mahrez was incredible in the 2015-16 miracle season when he won the PFA Player of the Year as the Foxes claimed the most unlikely title in Premier League history.

Now 30, he has always been the man for the big occasion.

He scored 17 times in that incredible campaign, and added a 95th-minute winner for Algeria in the 2019 Africa Cup of Nations semi-finals as his country won the trophy for the first time in 29 years.

A Champions League winners’ medal would complete an extraordinary collection, but Riyad Mahrez is just looking forward to playing in such a big match.

“We’re very comfortable to play our game,” he says. “No pressure, just play with personality, that’s it.

“Of course you feel some pressure before games but it’s a good pressure. You have to turn it into confidence and personality.

“I wouldn’t say it’s easy but for me it’s okay. I don’t put the pressure in my head - I just play like it’s a normal game. Obviously thinking that it’s a Champions League final but it’s just a football game for me.”

His relaxed demeanor matches that of Pep Guardiola, who has remained remarkably calm in the build-up to the first Champions League final in the club’s history.

His record in Europe at City had been underwhelming, but everything has to come together this season, with the team unbeaten going into the final in Porto.

The closest they have come to defeat was a tense quarter-final with Borussia Dortmund when they were heading out of the competition on the away goals rule until being awarded a second-half penalty that Mahrez converted.

“That you can feel some pressure for, yes,” he says, “but you turn it into ‘come on, I’m here to help the team win’. And then you take it.”

Victory over the German side was followed up by wins home and away against PSG, with Riyad Mahrez scoring both goals in the 2-0 victory at the Etihad Stadium.

But it was his goal in the French capital that turned the tie on its head.

City were level at Parc des Princes when Mahrez took a free-kick away from team-mate Kevin De Bruyne - who had earlier netted an equalizer following Marquinhos' headed opener - and curled a 20-yard effort through the wall and past Keylor Navas.

A special moment for Riyad Mahrez 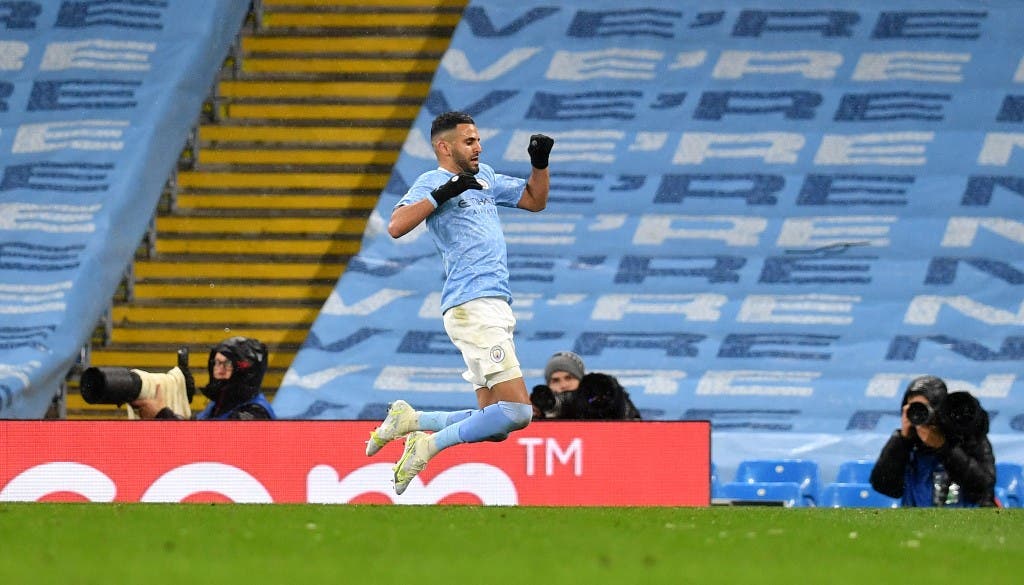 It was a special moment for a player that had grown up in Sarcelles, 15 miles north of the French capital, as a skinny kid with outrageous technique and talent.

His footballing journey took in French sixth division side Quimper and the pretty Normandy town of Le Havre before arriving at Leicester.

Now he is in the final that he has dreamed of since he was a little boy.

"When I came to this club obviously it was to play in these big stages, to be there every season and that’s where we are now," he says. "We all want to arrive at this stage. And now we have to focus and prove that we can win."

A first-ever final is the culmination of a season that started badly, with City struggling in 12th place in the Premier League in October. But a 28-game winning run was the basis for a third title in four years and success has been built on a close team spirit underlined by the togetherness in every City goal celebration.

"We are very good team-mates," Riyad Mahrez says. "We laugh a lot, we joke and I think that’s important for when you arrive in important games. You feel that love for each other so that’s good.

"Every day we were together, we couldn’t go out so..." Breaking off to make the shape of a heart with his hands, Mahrez adds: "It changes feelings.

"We have a very good squad, we know everyone can compete with everyone and that’s the strength of our squad. Everyone can play and everyone can make the difference.

"We didn’t have a pre-season. We knew with more games and more games we were going to get into the season. And when we started winning, winning and winning we didn’t stop. Our team is like this."

And every City player has had to make the difference in front of goal, with much of the season having been spent playing without an orthodox striker.

With no central focus, six players, including Mahrez have reached the teens for goals this season.

The system has brought out the absolute best in many of City's forwards, and Mahrez is quick to praise the influence of manager Guardiola.

"He’s so helpful, he helps us a lot," he says. "He drives us and guides us all the time from outside and in training, so we always have good advice and we know how to play and win."

But whether Mahrez is playing the best football of his career is a worthy debate.

He is quite right to point out that he has been very good for a very long time now.