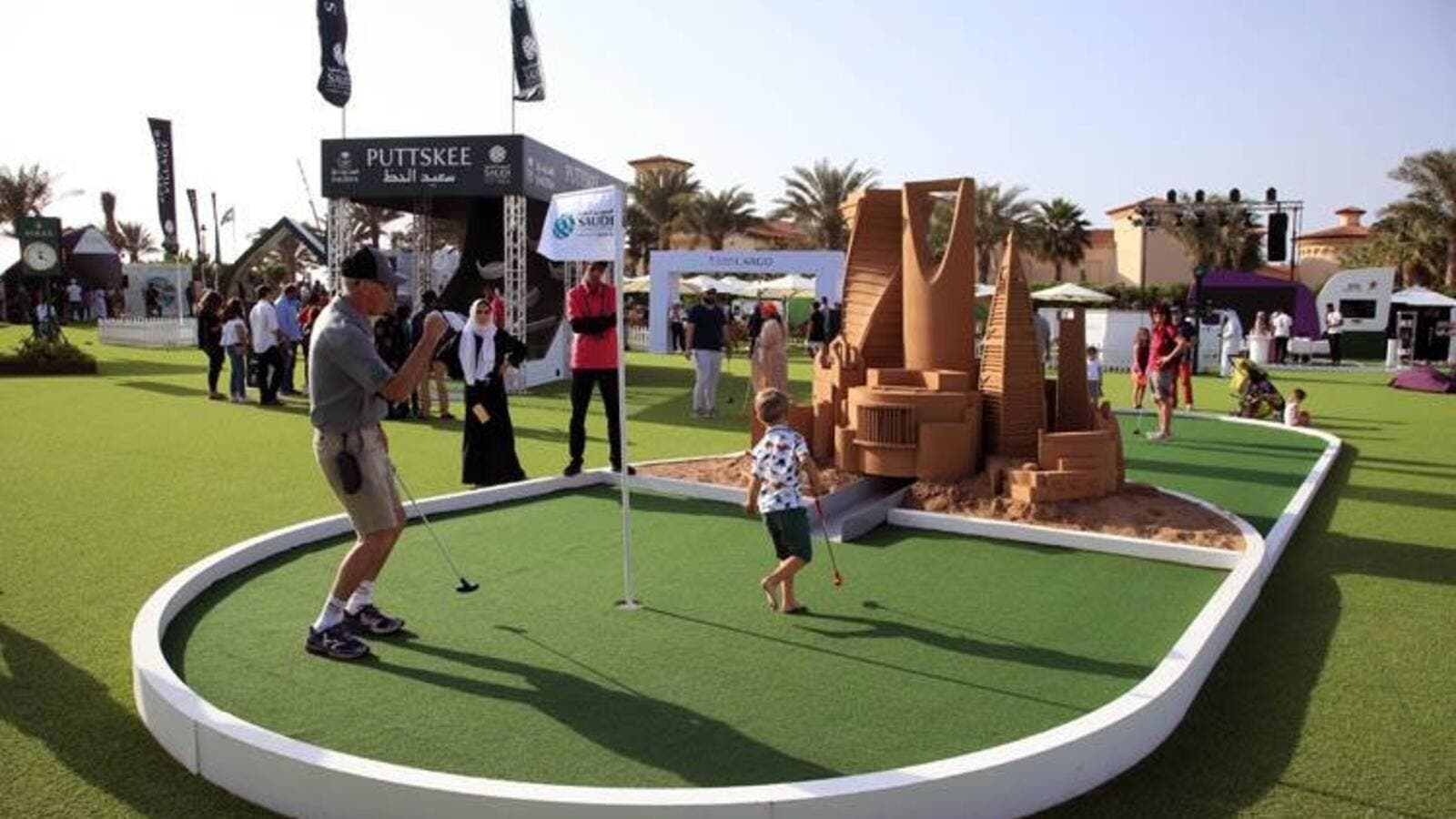 Organizers of the second annual Saudi International golf tournament have unveiled plans for a thrilling, action-packed Entertainment Zone that promises to serve-up the ultimate day out for anyone looking to experience something new later this month.

The 2020 Saudi International powered by Softbank Investment Advisers will welcome the most famous golfers on the planet to the Royal Greens Golf & Country Club at King Abdullah Economic City this Jan. 30 – Feb. 2.

But away from the fairway, and the tournament becomes a must-visit for families and groups looking to have an unforgettable day out thanks to its just announced experience-packed Entertainment Zone.

Spread over a huge outdoor area, the zone will allow visitors to try everything from gourmet burgers, shrimp and ice cream, to hyper-speed, mega-real VR races through the streets of Diriyah in a Formula E car, to relaxing with a coffee watching the golf play-out on the Saudi Aramco Big Screen — or jumping through an enormous inflatable assault course!

Saudi International Tournament Director Ben Freeman said: “The 2020 Saudi International is all about the ultimate day out; golf, entertainment and music. Whether friend groups, families or golf fans, people will be heading to King Abdullah Economic City to enjoy a not to miss experience. That’s what the Entertainment Zone will provide — and then some!

“Away from the on-course action — which, of course, all visitors can enjoy the thrill of live and up close — our Entertainment Zone will have food trucks serving delicious international cuisine, drinks and snacks; a gamers’ paradise in our PIF-powered E-Sports Arena; endless fun for children; and a Performance Zone dreamt up by Golf Saudi and the Saudi Golf Federation to show just how easy and fun it is to get out playing golf — a sport that’s in its infancy here in the Kingdom but growing considerably.

“With the Friday, Saturday and Sunday climaxing with live concerts from some of the biggest superstar artists on the planet, the entire weekend will be electric with a true festival vibe, and we can’t wait for people to experience it.”

The specially made Entertainment Zone will be split across five unique areas.

Its ‘Taste’ hub will be home to a mouth-watering food oasis, which will be packed with flavors from the home countries of many of the tournament’s players, all served from Uber-cool food-trucks.

HD super pods in the Entertainment Zone’s darkened E-Sports Arena, powered by PIF, will give gamers the chance to pursue their passion — but this time set in some of Saudi’s most sensational locations.

Featuring VR headsets, gamers will be able to race through the ancient streets of Ad Diriyah at the controls of a Formula E car, or experience the thrills and spills of hurtling through the desert as part of the hair-raising Dakar Rally.

A special E-Golf challenge will allow have-a-go golfer-gamers to pit themselves against the likes of four-time Major winner Brooks Koepka online too.

The central feature of the Entertainment Zone will be its ultra-modern Performance Zone, presented by Golf Saudi and Saudi Golf Federation, where absolute beginners through regular golfers alike will be able to get hold of a golf club and try their hand on a selection of fun games and challenges, with prizes to be won.

Presented by Golf Saudi, the zone’s ultra-real golf simulators will digitally transport those wanting a taster session onto the tee of many of the most famous golf courses in the world. It will also have course-condition putting and chipping areas, and mini golf.

If that whets the appetite for fun, then the ‘Bounce’ area will be a must visit — as it is entirely inflatable! The air-filled assault course will have obstacles, tunnels and slides guaranteeing hours of hilarious fun, for children and adults. If it all proves too much for the kids, then the Play & Party zone for three to nine-year-olds is a safe stop after.

Freeman added: “With the ultimate combination of have-a-go fun, hands-on learning and delicious foodie experiences — plus superstar live DJs and artists — time spent away from the golfing action at the Saudi International promises to be just as momentous as the action unfolding on the course.”

With two weeks to go until the competition begins, visitors are being advised to start planning their trip to what promises to be ‘The Ultimate Day Out’ at the Saudi International.

A total 132 players will descend on the stunning King Abdullah Economic City’s Royal Greens Golf & Country Club at the end of the month, competing for a share of the $3.5m prize fund on offer.

Defending champion Johnson, world No. 1 Koepka, five-time Major winner Phil Mickelson and US Masters winner Patrick Reed are just four of the box office US names competing. British Open Champion Lowry and Ryder Cup heroes Henrik Stenson and Sergio Garcia — who boast a further two Major titles between them — will lead the European contingent of household names battling it out.

Tickets are now on sale, priced at SR50 per day or SR160 for a full tournament pass (four days). Exclusive concert tickets will be available soon.

Jordanians Assemble Outside US Embassy in Amman to Protests Century Deal