Published March 3rd, 2022 - 06:16 GMT
Ukrainian President Volodymyr Zelenskyy attends a meeting with Britain's Prime Minister during the Munich Security Conference in Munich, southern Germany, on February 19, 2022. (Photo by Matt Dunham / POOL / AFP)
Highlights
‘We thwart their plans that had been prepared for years. More invaders are fleeing from us towards their homes,’ says Volodymyr Zelenskyy

Ukraine’s president said early Thursday that nearly 9,000 Russian soldiers have been killed since the full-scale war on the country began a week ago. 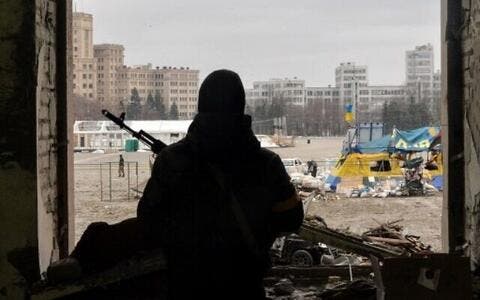 Is Ukraine a New Cuba in Reverse?

“About 9,000 Russians were killed in a week. In the direction of Mykolaiv, they had to take 200, 300 (Russian soldiers) 19-20 years old with dozens of helicopters,” Volodymyr Zelenskyy said in an address to the nation.

“Wherever they go, they will be destroyed. The invaders will get their answer from the Ukrainians,” Zelenskyy said, adding this is a “Patriotic War” for Ukrainians.

Noting that Ukrainians drove out the invaders from their cities with their bare hands, he added: “I sincerely admire the Ukrainians. We will drive them (Russians) away in disgrace…These are not state fighters. These are used, lost children.”

“We thwart their plans that had been prepared for years. More invaders are fleeing from us towards their homes,” he said.

Stressing that every invader should know that they will receive a fierce rebuff from the Ukrainians, Zelenskyy said they will not give up and that the Russians will remember this forever.