Dubai Water and Electricity Authority (DEWA) has launched the world’s largest concentrated solar power (CSP) project which will generate 1000MW of power when completed, it announced on Thursday.

DEWA has launched a tender for international consultants to submit a proposal for advisory services for the first 200MW plant, it said.

The tender for the consultant is expected to be awarded in three months, confirmed DEWA managing director and chief executive officer Saeed Mohammed Al Tayer.

The next tender for the main developer will be floated after the following three months, he added.

“We will decide the winner based on the lowest bid,” he told reporters. While current rates for CSP stand at around 15 cents per kilowatt hour, Al Tayer said he was aiming to receive bids of around 8 cents.

The facility will be completed either in late 2020 or early 2021, depending on the contract.

“The plant will have several thousand heliostats located around a tower which will receive the radiation reflected by the heliostats. The heat-transfer fluid is then used to power the steam turbine to generate electricity,” he explained.

The overall project will be developed in a build and operate model for a duration of 25 years. DEWA will retain 60 per cent.

Al Tayer refused to reveal the CSP project cost, but confirmed that the overall 5000MW project within the solar park – including PV and CSP – would cost Dhs 50bn.

The Mohammed Bin Rashid Al Maktoum Solar Park – the largest single-site solar park in the world – is expected to produce 1000MW of power by 2020 and 5000MW by 2030. When it’s complete, the project will reduce 6.5 million tonnes of carbon emissions annually. 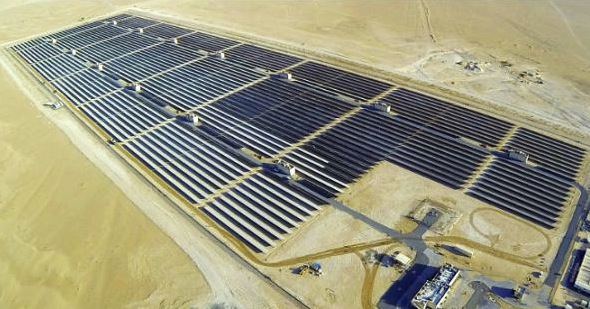