How Will the Aviation Industry Survive Its Second Big Global Blow?

Published March 3rd, 2022 - 07:00 GMT
Sanctions against Russia can have a major impact on the aviation industry. (Shutterstock: @Jag_cz)

As the Russian invasion of Ukraine enters its second week, sanctions against Moscow keep getting more and more precise, targeting not only politicians and oligarchs but also the country's leading businesses. 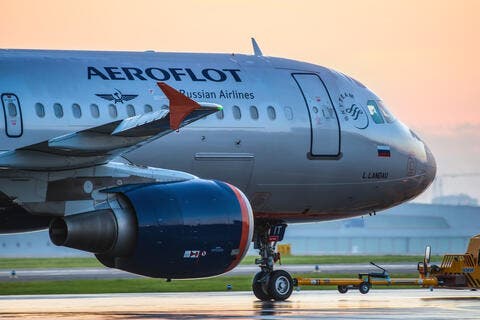 These Are the Countries That Banned Russian Airlines

#UPDATE American aviation giant Boeing says it is suspending its support for Russian airlines and its operations in Moscow amid a growing backlash to Russia's invasion of Ukraine.

Moreover, the world's leading manufacturer of aircraft, Boeing, has ended their support for planes purchased by Russian airlines, further tightening the strain on the country's aviation sector. America's Delta Air Lines has also suspended cooperation with the Russian airlines known as Aeroflot.

An unexpected decision came from Japan when two airlines announced suspended air flights to Europe on the 3rd of March, citing rising safety concerns due to the ongoing fight in Ukraine.

These decisions came within a series of sanctions that have targeted Russia in an effort to pressure its economy and force a political decision of curbing the violent fight in Ukraine and heading to negotiations. The Russian financial system has also been cut off from the international banking system known as SWIFT, which is estimated to cost the Russian economy billions of dollars.

Yet, the ramifications of Western sanctions against Russia will not be limited to the borders of Russia, as the world's economic system is set to suffer major negative consequences as well, especially given the scale of the Russian economy, a leading force on the global level.

Decisions to stop Russian airlines from flying over most Western countries could deprive them of millions of tourists that flocked to western countries throughout the years, slashing gains made annually by tourism and travel businesses, not to mention the massive blow Western airlines will receive as a result of their inability to fly to the many Russian cities and regions until peace is restored in east Europe.

Russia's invasion of Ukraine and aviation bans are creating huge no-go areas in the sky, with major implications for long-haul carriers that normally criss-cross the skies of Eastern Europe en route to Asia https://t.co/TEVmMkX5qD

While all industries are now exerting every effort to help businesses cope with this new global emergency, managing losses might be challenging the most to the aviation industry, given how it is still trying to recover from the painful damage caused by the COVID19 pandemic over the last two years.

That is in addition to the currently soaring oil prices that have been making it even more difficult for airlines to maximize their profit or make up for the losses recorded since the early months of 2020. According to the International Civil Aviation Organization (ICAO), losses of the civil aviation industry airlines have since COVID19 has hit $372 billion USD.

While the war in Ukraine might not cost the industry similar numbers, considering its less global scale, so far, it is still expected to hardly harm the recovering industry the more the war continues.

Considering how novel this latest crisis in Ukraine is, it is still hard to predict the rate at which airlines will be seeing major losses. However, strategists are now trying to draw helpful conclusions out of the two-year aviation crisis, in the hope it can help alleviate the major risk of another huge blow.