Kenya's smartphone market saw shipments increase 20.3% year on year (YoY) in Q4 2019, according to the latest figures from global technology and consulting services firm International Data Corporation (IDC). Elsewhere in East Africa, Tanzania and Uganda experienced YoY growth of 8.7% and 8.6%, respectively. Looking at 2019 as a whole, these three markets combined saw total smartphone shipments of 10.7 million units, up 13.3% on the 9.4 million units that were shipped in 2018.

Most brands operating in the region increased their marketing spend in Q4 2019, with an accompanying surge in sales promotions. The region's vibrant distribution network also had a positive impact on the market, while online retailers were particularly successful at promoting Black Friday in November. The wide availability of smartphones in the low and mid-range price bands ($0<$200), which accounted for 86% of the total units shipped in Q4 2019, was influential to the market's growth. Positive market sentiment and a stable dollar also contributed to the market's improved performance.

Transsion brands (Tecno, itel, and Infinix) dominated the East Africa smartphone market, accounting for 70.8% of total shipments in 2019. Samsung placed second with 10.9%, followed by Huawei and Xiaomi with respective shares of 5.2% and 3.7%. 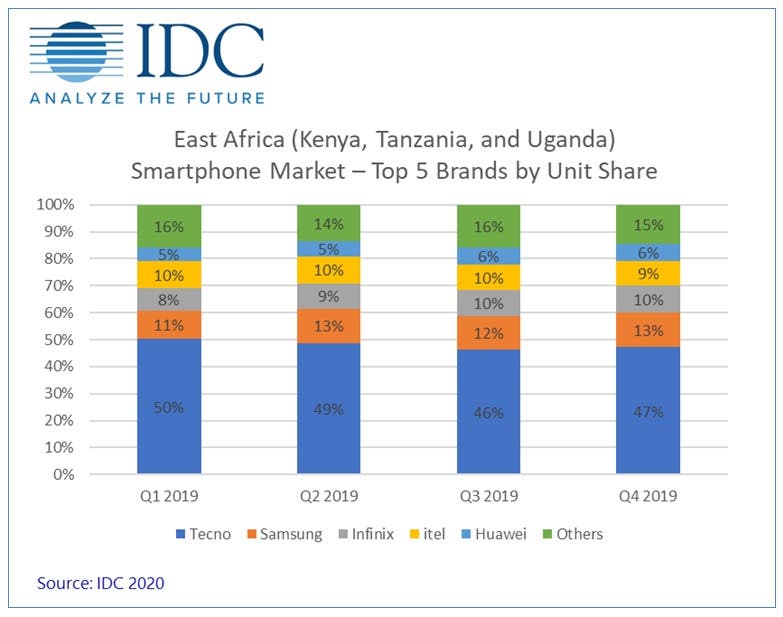 Samsung's A series models proved particularly popular in the East Africa market, with their superior features, attractive designs, and affordable prices driving strong demand. However, Transsion's Tecno brand was the clear market leader with successful launches of its best-selling Spark 4 and Camon 12 models.

As per the most recent Situation Report (#55) from the World Health Organization, there are now 153,517 confirmed cases of the COVID-19 virus worldwide, with 5,735 deaths. In response to the pandemic, IDC has developed three possible scenarios – Optimistic, Probabilistic, and Pessimistic – and currently believes that the Probabilistic scenario is the most likely to occur, with both supply- and demand-side concerns alleviating by the second half of 2020.

The smaller markets of Tanzania and Uganda are likely to see steeper declines as the priority of limited supply is expected to be given to the bigger Kenyan market. Top distributors and retailers have warned that prices of consumer goods, mobile phones, TVs, and fridges, among others, will rise from March 2020 as the effects of the COVID-19 pandemic disrupt supply chains. Those distributors that shipped in goods in bulk before the start of the Chinese New Year in January expect to run out of stock in a few weeks.

The Chinese brands Tecno, Itel, Infinix, Oppo, Xiaomi, and Huawei account for more than 85% of total smartphone shipments to East Africa. Meanwhile, other brands such as Samsung and Nokia source their components from China, with the assembly of a certain portion of their devices also taking place in the country. Due to the dominance of the Chinese brands in the East Africa market and the dependence of other brands on China for components and assembly, the slowdown in China will have a huge impact on the smartphone shipments in the short term. The virus will also affect the launch patterns for new smartphone models.

"East Africa's smartphone market is growing due to the large population of young people and the increasing adoption of technology in this developing region, while the relatively calmer economic climate also helped spur growth throughout 2019," says George Mbuthia, a research analyst at IDC. “Demand for smartphones remains very high in East Africa, so shortages in supply are currently driving an increase in gray market units from Dubai and elsewhere in the Middle East. This is expected to continue until the impact of the COVID-19 outbreak on supply chains in China lessens or the gray channels run out of excess stock.”

Under IDC's Probabilistic scenario for East Africa, smartphone shipments are anticipated to decline in Q1 2020. "While the decline would be more drastic under the Pessimistic scenario, stocks that were imported in the early months of the quarter have helped to stem the decline," says Dr. Ramazan Yavuz, a senior research manager at IDC. "In Q2 2020, the market will continue to decline due to supply chain disruptions in China. The prices of the available smartphones will also rise slightly, driven by the shortage in supply. At this early stage of the crisis, it's important to be circumspect and IDC's probabilistic scenario has the virus being contained by Q3 2020, at which point production should fully resume."

International Data Corporation (IDC) is the premier global provider of market intelligence, advisory services, and events for the information technology, telecommunications and consumer technology markets. More than 1000 IDC analysts provide global, regional, and local expertise on technology and industry opportunities and trends in over 110 countries worldwide. For more than 47 years, IDC has provided strategic insights to IT professionals, business executives, and the investment community to help them achieve their key business objectives.