Published December 15th, 2020 - 12:30 GMT
The number of medical supplies and sterilizers factories has doubled within three to four months of the pandemic. (Shutterstock)
Highlights
Growth of industrial licenses shows the resilience of the sector, but emphasis needs to be on local resources
A total of 829 new industrial licenses were issued by the Saudi Ministry of Industry and Mineral Resources between January and November this year, a rise of 8.67 percent and a sign of the resilience of the industrial sector in the face of the impact of the coronavirus pandemic.

The ministry said that the total number of factories had risen to 9,563, with a total value of SR1.086 trillion. Riyadh dominated among the Kingdom’s 13 regions, with the Saudi capital accounting for 40.4 percent of factories, followed by the Eastern Province (21.9 percent) and the Makkah Region (18.9 percent).

The monthly figures showed that as the impact of the pandemic took hold, the number of new licenses dropped from 99 in January to just 11 in April and four in May. However, once travel restrictions began to be lifted, the sector recovered, with new issuances rising to 118 in June and 124 in October.

One industry source told Arab News that the sector had seen a positive uptick in business as a result of the pandemic and the executive director of a face mask manufacturing factory said the sector was promising, competitive and well resourced. 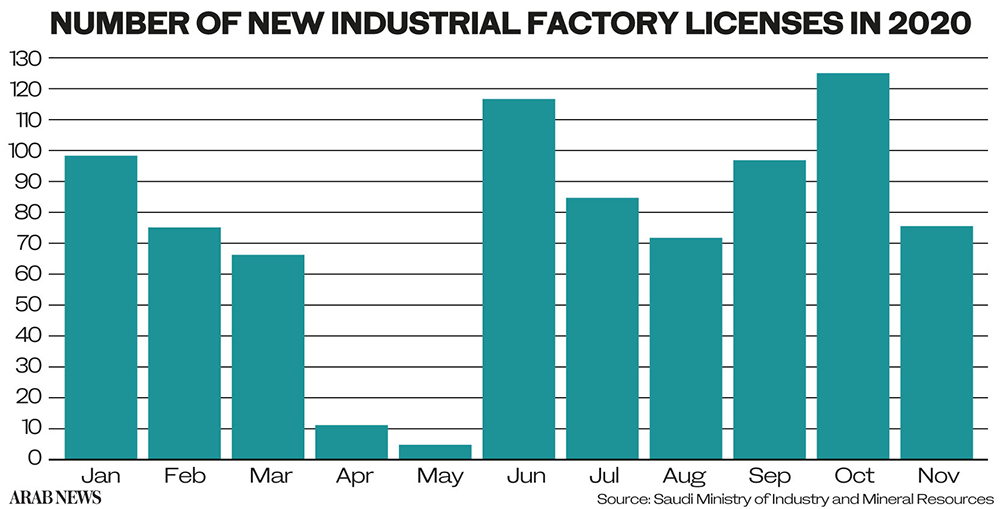 Saleh Al-Nazaha, a member of the Economics Committee at the Shoural Council and the president of Badael, a medical supplies manufacturer, said the COVID-19 pandemic imposed big challenges around the world but that the Saudi industry sector continued to perform well and supported local factories.

“The number of medical supplies and sterilizers factories has doubled within three to four months of the pandemic. While the health sector exerted great efforts to face the pandemic, the industry sector also supported the factories, thanks to the directives of the Custodian of the Two Holy Mosques and the Crown Prince and also the minister and his team who worked hard and dedicated their time to support factories,” Al-Nazaha said.

Bandar Alkhorayef, minister for Industry and Mineral Resources, said last week that there needed to be an emphasis on local produce and resources to help make the Kingdom more independent and self-reliant, something which Al-Nazaha said needed to be prioritized.

Al-Nazaha said that there were major industrial partnerships that manufactured local products using 70 percent local parts. “I am certain that our local products will be used 100 percent in our projects and projects in other countries,” he said.

Zael Al-Dayhani, a logistics expert, said that the industry sector was a key pillar of the economy and the goal toward becoming less dependent on hydrocarbons and more self-sufficient. He emphasized the importance of fully integrating the public and private sectors, especially when it came to overcoming the challenges and repercussions of the COVID-19 pandemic.

“It is important to focus on the sectors that have strong infrastructure and competitive advantage,” he said, adding that small and medium-sized companies also needed more support so they could scale upwards, especially those in the services sector.

The service industries should be developed alongside other industries so that they could create job opportunities and reduce dependence on imports. This way a complete service and industrial ecosystem could be built, he said.

“These companies need to develop their marketing strategies and management systems. They also need long-term strategies to ensure full integration with the ecosystem,” he said.

Moath Al-Sanad, the executive director of Superior Business, said his company was a clear example of what could be accomplished, even in the middle of a national crisis such as the COVID-19 pandemic.

“We managed to found Superior Businesses for medical supplies and cover some of the medical needs for this precious country,” he said.

He said the establishment of companies such as Superior Business was a positive example of the government’s bid to increase the Kingdom’s non-oil exports from 16 percent to 50 percent of GDP by 2030.

“We take pride in these efforts. Undoubtedly, our industrial sector is promising and highly competitive and boasts capabilities and resources, thanks to the unlimited support from the government, especially the Custodian of the Two Holy Mosques and the Crown Prince, and also the Vision of 2030, which attaches great importance to the industry sector and the development of the national economy,” Al-Sanad said.

To achieve these ambitious 2030 targets, Dr. Abdul Aziz I. Daghistani, an economics expert, said that despite the strides made this year, the industrial sector still needed more support, to encourage greater use of local produce and also human resources.