Media consultant Matt Navarra noticed the blue tick had vanished from Apple's page on Facebook Tuesday morning - a week after the Mark Zuckerberg-founded site slammed the iPhone maker over its upcoming privacy changes.

On Facebook, almost all big brands and organizations are given a blue tick on their official social media pages to symbolize their authenticity.

Apple's main rivals, Microsoft, Hewlett Packard, and Samsung have all been given such ticks by Facebook.

It is unclear exactly when Facebook decided to delete Apple's blue tick. DailyMail.com has reached out to the company for comment.

Silicon Valley's latest war over privacy erupted last week. At the crux of the issue is changes to Apple's iOS 14.4, which will go live next year and require users to give permission in order for apps to track them for advertising purposes. 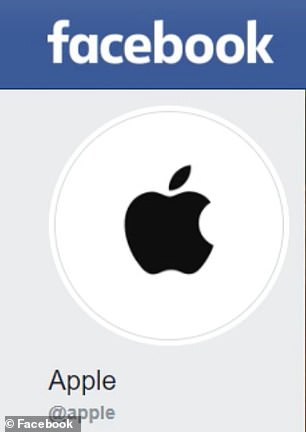 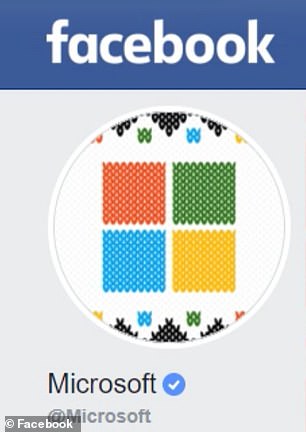 Apple's main rivals,  including, have all been given such ticks by Facebook

Facebook can currently track users between apps. They say it helps connect small businesses to customers.

The social media giant took out a full-page ads in relations to Apple's proposed changes, saying they were 'standing up for small businesses everywhere'.

Apple CEO Tim Cook then blasted back on Twitter, stating: 'We believe users should have the choice over the data that is being collected about them and how it's used,' he wrote.

'Facebook can continue to track users across apps and websites as before, App Tracking Transparency in iOS 14 will just require that they ask for your permission first.'

Cook included a photo of a notification that users will be given asking whether they want apps like Facebook to track their activity.

We believe users should have the choice over the data that is being collected about them and how it’s used. Facebook can continue to track users across apps and websites as before, App Tracking Transparency in iOS 14 will just require that they ask for your permission first. pic.twitter.com/UnnAONZ61I

Cook did not address Facebook's claim that Apple's own personalized ad platform will be exempt from the new prompt requirement imposed on other companies.

'Apple is behaving anti-competitively by using their control of the App Store to benefit their bottom line at the expense of creators and small businesses. Full stop,' Facebook Vice President for Ads and Business Products Dan Levy said last Wednesday.

Apple has previously stated that: 'Users should know when their data is being collected and shared across other apps and websites — and they should have the choice to allow that or not.

'App Tracking Transparency in [the upcoming] iOS 14 does not require Facebook to change its approach to tracking users and creating targeted advertising, it simply requires they give users a choice.'

The changes will restrict companies, including Facebook, from gathering data on users to provide personalized ads for users.

Users will be able to deny or approve it with a click of a button under the changes. Currently, consent for tracking is done in the setting area of the iPhone under the privacy tab.

It is expected that most users will likely decline to consent.

It was set to launched this year, but Apple pushed the rollout date to allow developers more time to make changes to comply with the new rules. It is rumored to be released in March.

Apple has said that the feature aims to give people more choice over how they want to be tracked by companies on the internet – and the ability to say no if they don't want tracking.

'We welcome in-app advertising and are not prohibiting tracking. We’re simply requiring each app to obtain explicit user consent in order to track so that it will be more transparent and under user control,' Apple said.

Facebook said that although the company disagreed with Apple's approach, it would comply with the new rules and display a prompt.

'We don't have a choice if we want our app to be available in the App Store,' Levy said.

The series of advertisements from Facebook is just the latest in the ongoing feud with Apple and the iOS changes.

Facebook had slammed Apple over the summer, saying the changes will cripple app makers' ability to make money from targeted advertising.

Apple had hit back saying: 'When invasive tracking is your business model, you tend not to welcome transparency and customer choice.'

'Facebook executives have made clear their intent is to collect as much data as possible across both first and third party products to develop and monetise detailed profiles of their users, and this disregard for user privacy continues to expand to include more of their products,' Apple said.

Apple says it has been working since 2003 to preserve user privacy on the web by limiting tracking between websites and this is the first step at taking on the challenge for tracking in apps available through iOS.

Tracking can be invasive and as a result, Apple said it believes that tracking should be transparent to users and under their control.