The Yemeni riyal on Wednesday reached record lows, trading 1,003 to the dollar in the black market despite fresh economic measures by the government, currency traders told Arab News.

The bank was tasked to form two committees: One would review revenue collection, ensuring they are deposited to central bank branches across the liberated provinces; the other would work on boosting oil exports.

The government accused local currency dealers of engaging in speculative activities on hard currencies that contributed to the sudden rapid fall of the riyal.

“The SEC confirms that recent currency depreciation is not based on objective reasons but speculative considerations and misinformation,” the council said in a statement carried by the official news agency.

Meanwhile, the central bank’s inspectors, escorted by armed soldiers, were seen roaming around the city of Aden, closing firms that did not comply with the country’s monetary rules.

The market did not positively react to the government’s measures and threats. The riyal hit 1,003 to the dollar on Wednesday afternoon in the southern port city of Al-Mukalla, after bouncing back to 985 on Monday.

The riyal had reached a new record low on Sunday night, hitting 1,000 riyals to the dollar. It was trading at 215 to the dollar in early 2015.

The riyal briefly recovered in January after a new government — formed under the Riyadh Agreement — returned to Aden as hostilities between the internationally recognized government and the separatist Southern Transitional Council (STC) subsided.

Official media reported on Tuesday that Yemen’s Parliament Speaker Sultan Al-Barkani urged the prime minister to find urgent solutions to the devaluation of the riyal and to reform the country’s financial system, adding that parliament would stand by government’s measures to address corruption and collection of revenues.

“All necessary measures should be taken quickly to stop the deterioration (of the currency) and reach a real solution. And we hold you responsible if you fail as the situation cannot be delayed,” Al-Barkani said in a letter to the prime minister.

Yemen analysts have argued that neither the government nor the central bank can impose the latest measures in the liberated areas as the Yemeni government has been based outside the country since March.

Previous measures to address the depreciation of the riyal have all proved ineffective. Attempts included closing exchange firms, stopping the remittance system between local exchange firms known as Hawala — replacing it with a formal electronic network under the central bank’s supervision — and supplying local fuel and goods importers with dollars. None of these attempts succeeded.

The Yemeni government said it cannot return home due to STC’s harassment and interventions in its work.

On Tuesday, the government’s committee for the implementation of the Riyadh Agreement said that the STC did not adhere to its security and military commitments under the agreement and continued to deploy military units, disrupt the work of government bodies in Aden and incited people against the government.

The STC spokesperson did not immediately respond to requests to comment from Arab News in response to the government’s accusations.

Economists have blamed the government for the plunge of the riyal due to “extensive” money printing without coverage and its inability to assert control on the exchange market. 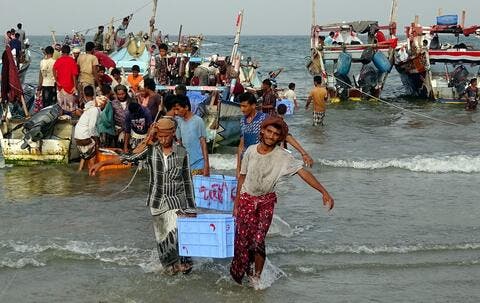 Over 43,000 Civilians Hurt, Killed in The War on Yemen

Al-Attas said the Yemeni government depends on a “helicopter money” policy to address the devaluation of the country’s currency, by printing and distributing cash in the market.

“The increased amounts of money supply led to an additional demand for foreign currency, causing the deterioration of the value of the local currency. In my opinion, the solution lies in stopping the injection of more funds and enhancing public revenues and depositing them into the legally authorized body which is the Central Bank,” he said.