17 Artists Highlight Impact of Oil on The Environment 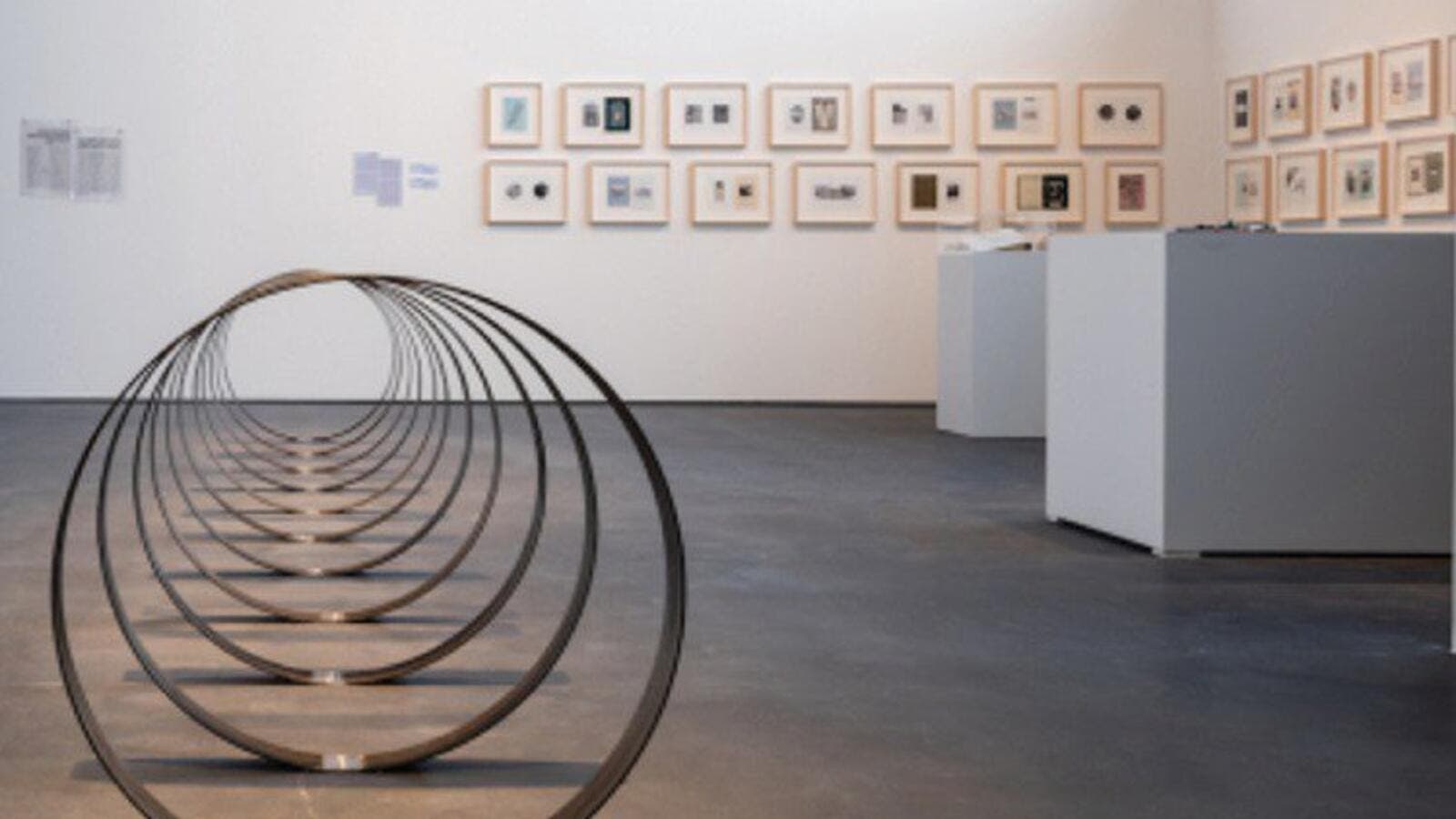 An uncharacteristic chill yanks at the evening air of the United Arab Emirates’ coastal cities. Outdoors at nighttime, Emiratis and resident foreigners - coached in local knowledge of long scorching summers and brief mild winters huddle into themselves, burrowing into their clothes.

As you wander through “Crude,” Jameel Arts Centre’s debut show, rumors of climate change slap at the back of your brainpan like a rebuke.

The show reflects upon the matter of petroleum. Several archive-informed pieces explore humans’ complex, multifaceted oil fetish the material, political, socio-economic and cultural artifacts of extraction in this region. Other, more aesthetic works reflect upon the fractals of petroleum dependency that propel late capital.

“As the most valuable, highly coveted and finite natural resource,” Vali reflects in his curatorial essay, oil “was and continues to be a powerful agent of geopolitical upheaval and socio-economic transformation. Oil has been a trigger for misguided colonial adventures, imperial endeavors, wars and coups, a catalyst for nation-building, modernization and development, and a cause of terrible ecological disasters and irreversible climate change.

“The fuel of capitalist modernity ... oil’s ubiquity means we take it, and the way of life it fuels, for granted. ... Maybe because it pervades all aspects of our contemporary existence, our dependence on it is routinely abstracted and concealed, both consciously and unconsciously. Like capital, oil resists representation.”

Today’s oil narratives are likely to reflect the despotism associated with rentier states or else anxieties around climate change and the want of political will to stem imminent ecological and human disaster.

As Vali notes, for this region’s regimes (progressive and otherwise), oil revenues were once a means for state consolidation, which could bring vast material improvements in their citizens’ lives.

Pride of place is given to two former employees of the U.K. oil sector.

The paintings of Houshang Pezeshknia (1917-72), onetime illustrator for the publications department of the Anglo-Iranian Oil Company, were inspired, in part, by laborers staffing the country’s petroleum sector.

The luminous monochromatic works of photographer Latif al-Ani (born in 1932), a photographer for the U.K.-controlled Iraq Petroleum Company before he went to work for Baghdad’s Culture and Guidance Ministry, offer tableaux of mundane Iraqi life from a period of confidence and idealism that are sadly alien to contemporary perceptions of the country.

The early history of Western oil exploration in the region and the imperialist ambitions that sustained them - has also inspired contemporary artists pursuing a wide variety of practices.

Among archival works addressing the West’s early history of political engagement with petroleum, few will be as revelatory to a 21st-century public as “Chronoscope, 1951, 11pm,” Alessandro Balteo-Yazbeck’s 2009-2011 collaboration with Media Farzin.

This single-channel video samples the eponymous three-times-weekly CBS news digest, in which a pair of journalists interviewed a single guest. “Chronoscope” broadcast live in the early ’50s, when the innocence and indifference of U.S. audiences was assured.

The 25-minute work is enclosed within a room containing only a comfortable living room couch, replicating the conditions of the program’s original reception.

The artistry of Farzin and Balteo-Yazbeck’s piece lies in what they chose to select from the “Chronoscope” archives. They interweave comments from six guests from six episodes, orchestrating a fictive conversation about and around the 1951 Iranian oil crisis - caused when then-Prime Minister Mohammad Mosaddegh nationalized Iran’s oil industry.

Uttered with casual candor, the remarks of statesmen, oil executives and experts on the region betray an intimacy of state and corporate interests that both parties later became adept at camouflaging and denying. “Chronoscope, 1951” also retains live ads for the show’s sponsor, Longines-Wittnauer, “manufacturers of The World’s Most Honored Watch.”

Another gallery is devoted to Nasrin Tabatabai and Babak Afrassiabi’s mixed media installation “Seep,” 2012-18, a rumination upon the relationship between petroleum production and cultural production in Iran. “Seep” is bookended by a pair of videos.

Ambitiously touted as the first Technicolor film produced in Iran, it was intended to showcase the AIOC’s activities in the country, the fulcrum being Abadan - then home of the world’s most productive oil refinery and the state-of-the-art city developed to service it.

A parade of delays and obstacles compelled Keene to inform his bosses that the project was “unfilmable” and when “Persian Story” was released in 1951 it was only 21 minutes long.

Located in Abadan, “Seep 2” is a road movie documenting the artists’ quest for one the region’s celebrated natural wonders a seepage, where oil literally oozes out of the ground without coaxing.

The installation between the two videos comprises scale models and other objects associated with Iran’s history of oil production including the celebrated collection of modern art Princess Farah, the wife of the country’s last shah, Mohammad Reza Pahlavi, accumulated using the country’s oil wealth.

The exterior wall of the space housing “Chronoscope, 1951” is adorned by the archival inkjet prints of Raja’a Khalid. “Golf in Arabia,” 2013 and “Desert Golf I-VI,” 2014, capture the incongruities embedded in the de facto colonial experience of expat oil company employees in the Gulf in the second half of the 20th century.

Mined from American oil industry and lifestyle magazines of the era, these photos of American expats golfing among the oil rigs dressed for a day at the beach back home, sometimes caddied by perplexed-looking, thobe-clad young Khalijis - documents the early evolution of enclave culture that has since become a standard feature of late capitalism worldwide.

The post-colonial (aka neocolonial) era of petroleum culture is further explored in “The ARD: Study for a Portrait 1-28,” 2018. Here, Hajra Waheed delved into the archives of the global oil giant Aramco, among other sources, in search of the company’s Arabian Research Division.

Founded and run by Arabist George Rentz, this obscure research, translation and information-gathering body was founded in the aftermath of the 1945 workers’ strikes and went on to play a key role in narrating Aramco to the world propagated most prominently, after 1949, by its in-house magazine “AramcoWorld.”

Among the research projects in which ARD participated were detailed ethnographies of tribes in Saudi Arabia’s Eastern Province, and (in the wake of the 1945 job action) a survey of key labor activists and political organizers.

Formally speaking, “The ARD” series is a disarmingly simple collection of collages, designed to resemble pages ripped from a binder.

Any late-20th-century student of the Middle East will be familiar with it, being one of the primary research tools on the region. Between 1954 and 1971 Rentz contributed 48 pieces to the encyclopedia.

The balance of the contemporary work on show leans away from the archive. Reflecting the same low-key aesthetic as “The ARD,” Waheed’s 2017 work “Plume” 1-24 is a series of small-format images of billowing smoke clouds, all of them deliberately cropped from the conflagration that produced them. The series confronts the onlooker with the assumptions they carry with them to an exhibition like this one.

Nearby, “Plume” finds an intersection of sorts in the 2013 video “Behind the Sun,” an early work Kuwaiti-born Monira Al Qadiri made in response to Werner Herzog’s operatically scored, biblically inflected 1995 documentary “Lessons of Darkness.”

While Herzog’s film was based upon crisp helicopter footage of oil wells set alight by retreating Iraqi forces in 1991, Qadiri’s work uses found VHS footage of the same fires, shot by a local journalist. The artist has accentuated the notable differences in the two works’ image quality by pairing the VHS footage with a male recitation of Sufi poetry contemplating the deity’s presence in the wonders of nature.

From the wall above “Aqua Lung,” 2018, a series of delicate glass vessels made from Gulf sand by Michael John Whelan, looms Qadiri’s three-piece series “Flower Drill,” 2016, part of wider body of work emulating the design of drill heads used in Gulf oil exploration.

Menacing in their size and alien design, these fiberglass works are coated in a paint that shares a luminescence associated with both petroleum and pearls (the principal source of wealth in the region before oil was discovered).

Nearby is Qadiri’s “ORBIT 1,” also from 2016. A spinning drill head levitated a few centimeters above its plinth, the work evokes “Star Trek”-era technology to replicate the techniques used to display luxury jewelry.

When it opened some weeks ago, “Crude” was a pleasant surprise for some international arts journalists.

Few doubted its curator’s abilities or those of the artists Vali brought into the show.

Rather they hadn’t expected the opening exhibition of a Saudi arts organization (Art Jameel) to be critical of that country’s principal source of foreign currency.

The work on show in “Crude” can’t be classed as “activist” or “politically engaged” in any partisan sense.

In the context of current media narratives of this hysterically oil-addicted globe, “Crude” is a reservoir of critical sobriety.

The number and variety of voices and practices upon which Vali has drawn makes his expo a master class in how to exhibit intelligently critical work without provoking the political and economic class implicated in the critique.

Art Jameel will host “Crude: A Symposium,” a series of talks, films and panel discussions on the themes explored in the exhibition, on March 30, from 10 a.m. to 8:30 p.m. See jameelartscentre.org.