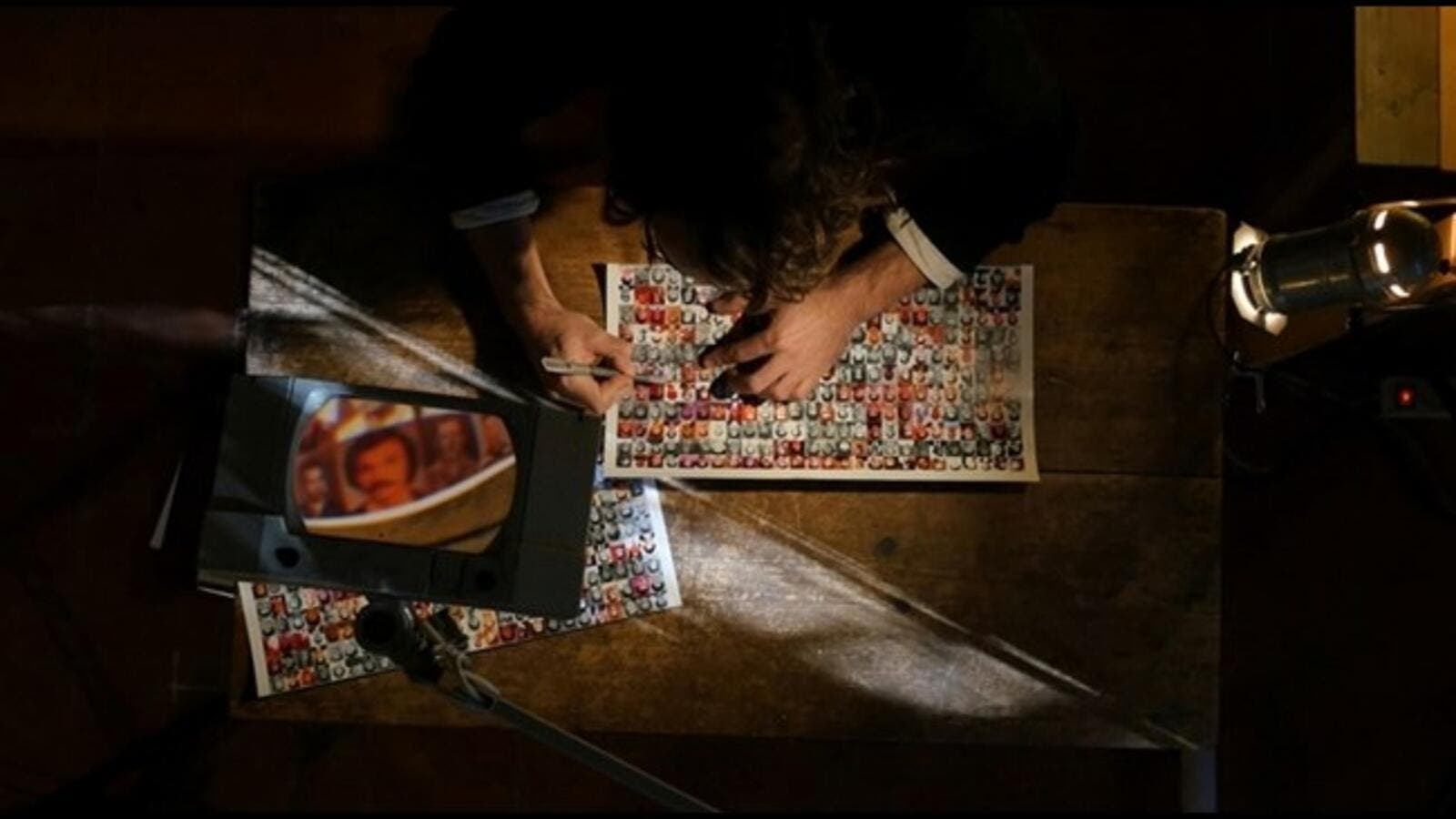 Halwani removes the portrait of a missing person from a collection of such portraits, "Erased, __ ascent of the invisible." (Photos courtesy of TIFF)

The disappeared have had a prominent place in Lebanon’s post-Civil War cultural production. In addition to NGOs and activists, their undocumented absence has preoccupied various journalists, writers, filmmakers and contemporary artists.

The reasons are varied and complex. They reflect the sheer number of individuals who went missing during the events of 1975-90 (reliable sources put the number of disappeared individuals at more than 17,000), the post-war state’s lassitude in determining or disclosing their whereabouts (state policy in this matter has been described as enforced amnesia), and the want of recourse available to survivors demanding to know the whereabouts of family members.

Ghassan Halwani’s “Erased, __ Ascent of the Invisible” is the latest film to take up the case of the missing. The feature-length documentary premiered earlier this year in the Locarno Film Festival’s Signs of Life section. Since then, it’s won the Bronze Tanit at the Carthage Film Festival and the Prize for Best Artistic Contribution at the Cairo film festival’s International Critics Week.

Halwani is an illustrator and animator recognized for his collaborations with artist duo Joanna Hadjithomas and Khalil Joreige and playwright-artist Rabih Mroue, among others.

His first feature-length film, “Erased” offers a dispassionate overview of the culture that surrounds the missing.

As he sits over a light table working with headshots of disappeared individuals (compiled by Umam Documentation and Research for its 2010 volume “Missing”), Halwani’s voiceover ruminates over how survivors find it easier to recall individuals when their photos are included among the ranks of the missing than when looking at individual portraits.

Poring over old newspaper reports about discoveries of mass graves, he recounts the first responses of some authorities to rebury any discovered remains, to claim they aren’t human at all, and to state that the number of disappeared is grossly inflated.

The definition of a complete crime, the filmmaker notes, falls in two parts.

Halwani also summarizes why it’s easier to know about some disappeared than others. Leftist and nationalist fighters and Palestinians killed and buried by Israeli forces are easiest to document. Others are harder to find, he says, because prominent Lebanese officials and Syrian occupation forces are implicated in their disappearance.

Something similar can be said of those killed and buried by various Lebanese militiamen.

“Erased” mingles these details of mass killings, kidnaps and mass graves with reflections upon photography and identity and unfolds like the documentation of an art project.

The film begins with three brief sequences to which Halwani returns at various times over his film’s 76 minutes.

The first scene frames an animated couple walking toward the camera, smiling cues to the journalistic anecdote that frames the film.

“Erased” then jumps to live footage of an exterior wall somewhere in Beirut. It’s the sort of surface most city-dwellers would have encountered at one time a multilayered palimpsest of ads whose products range from concerts and theater plays, to the grinning mugs of aspiring politicians, to the promise of high-speed internet.

The third point of reference is a black-and-white photo that, at first glance, captures an abandoned lot.

The accompanying voiceover discloses that during the War of the Camps when Syrian army proxies pummeled the country’s lightly defended Palestinian refugee camps in the mid-1980s an unnamed photographer captured two gunmen dragging a man through the dirt.

The filmmaker explains that this photo is a good metaphor for the official history of Lebanon’s Civil War. “The victim is missing because his body has disappeared,” he says.

“The kidnappers are missing because of [Lebanon’s post-1990] general amnesty law.”

As the exchange continues, and the camera gazes intent upon the photo and its slight incongruities a disembodied shoe, a hat drifting mid-air it is made obvious where the erased subjects had been.

“The shadow I left behind,” he says, “is the only trace of [the victim’s] existence.”

The film is rooted in a different kidnap, one the filmmaker himself witnessed 35 years before.

A decade later, his voiceover explains, he thought he’d found traces of the missing man’s face on a deteriorated poster hung from a wall.

The features of the man in the photo were at once familiar, he says and somehow not.

This anecdote provides the basis of the film’s second motif footage of an exterior wall covered with multiple layers of posters, photos and ads. Standing before the wall, the filmmaker uses a box cutter and pincers to “dig” through the vertical stratigraphy of this urban archaeology, peeling back individual papers and clots of paper that time and weather have formed into a thick mass.

His gesture echoes that of a well-known video piece by Jalal Toufic, which made use of the superfluity of campaign posters after Lebanese parliamentary elections. When Halwani’s film returns to this wall, as it does repeatedly, he’s not content to simply peel layers away.

In a performance that resembles forensic archaeology, he appears to “uncover,” portraits of the disappeared beneath the detritus of ad copy. These traces he “restores” with brush-dabs of water. Then he augments the recovered image with information about the individuals in each portrait and the circumstances of his or her disappearance.

This act, Halwani says, may be the only way to make sense of his friend’s disappearance.