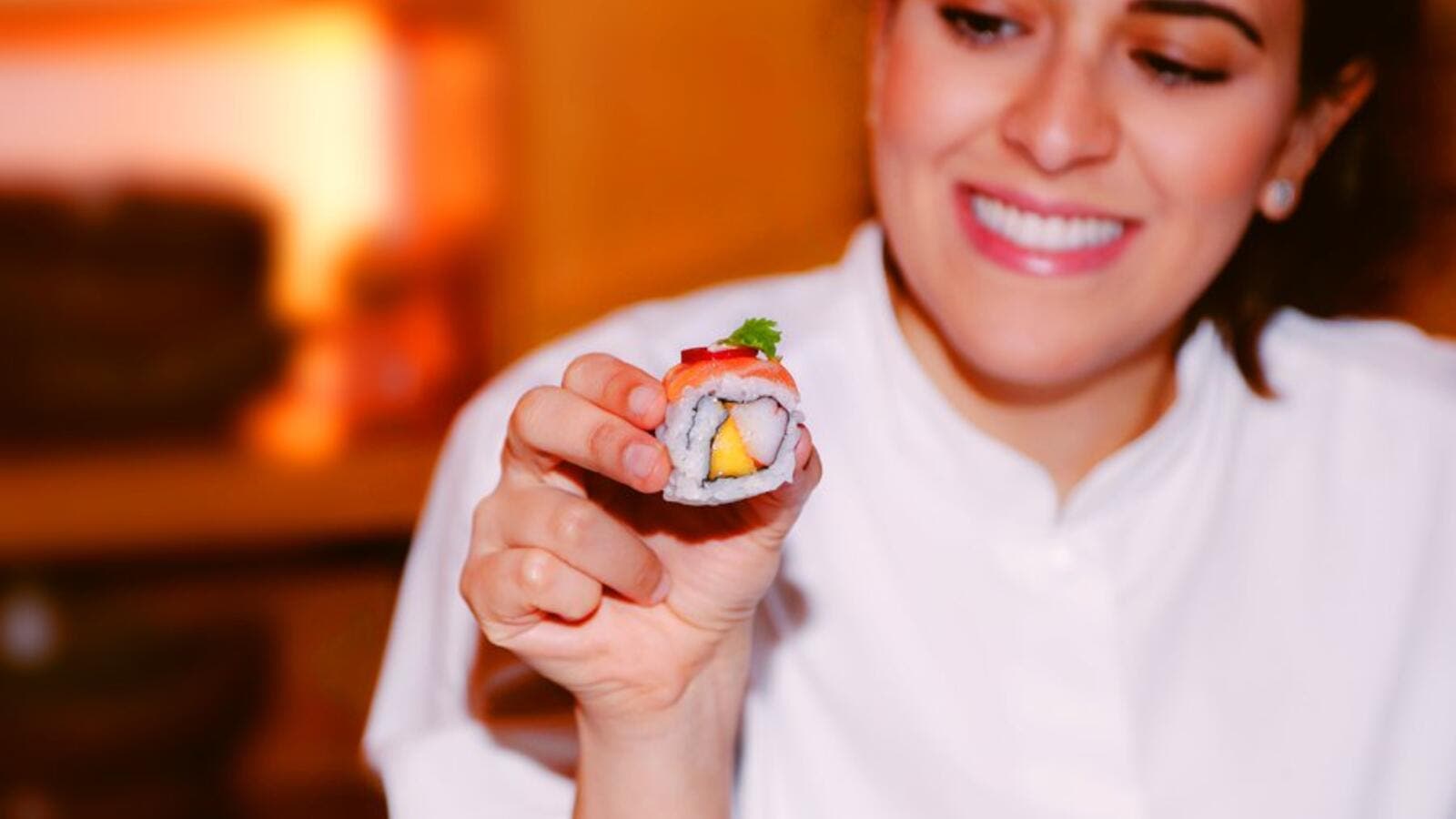 Khulood Olaqi is hands on at the restaurant she owns, manages and even works preparing food in the kitchen. (AN photos by Basheer Saleh)

Sushi is renowned as one of the healthier food options but, still, it seems like a daunting leap to go from studying to become a health educator to becoming a celebrated entrepreneur and head chef at one’s own restaurant specializing in the cuisine. But that is what Khulood Olaqi, the owner and cuisiniere at Oishii Sushi in Riyadh, decided to do almost a decade ago.

Since 2010, she has been offering a delectable array of sushi; delicious creations with unique flavors. Her brand, which started out as a home-based online store taking and delivering orders, has grown to the point where she has opened her first restaurant, which she owns, manages and even works preparing food in the kitchen. To top off her impressive list of achievements, Olaqi is the first Saudi woman to do so.

The 27-year-old launched Oishii Sushi as a side project while she was studying at university as a way to make good use of her free time.

“I have always loved cooking and wanted to be able to put the skills I’ve acquired over the years to good use, and I wanted to do something unique,” she said. “So my mother suggested that I start making sushi and I just fell in love with the idea.”

Olaqi taught herself to roll and wrap maki, slice sashimi, and even fillet and debone fish by watching video tutorials on YouTube.

At first she had concerns about whether sushi was popular enough in Riyadh to sustain a business, but her friends and family rallied round to offer support, placing orders and spreading word-of-mouth advertising, which she credits with giving her a strong start in the business.

“As student of applied medical sciences, I didn’t really have a lot of experience with the business side of things, so of course at first I made a lot of mistakes and I wasn’t making enough profit,” she said. “But my friends persisted in asking me for orders and so I learned how to better manage things. I learned it the hard way — but I learned it.”

After graduating from university Olaqi was accepted for a master’s program and realized that she would have to choose between her two passions, as the workload involved in trying to juggle both of them had begun to weigh heavily on her.

“It wasn’t feasible to keep both of them going at once, it was too exhausting,” she said.

After consulting with her husband, and realizing how much she loved the culinary field and how successful the business was proving to be, she decided to take a gap year to focus on it. During that time, she realized she had found her calling and decided to pursue a full-time career in sushi making.

In preparation for going professional, Olaqi attended courses at the Tokyo Sushi Academy in Singapore with her husband, where she refined her skills and got specialist training from expert chefs to learn the things she could not pick up online.

To expand her repertoire she also attended courses at London’s Cordon Bleu Academy.

The skills she acquired are clearly on display in the range of offerings at Oishii Sushi, which includes classics such as steamed edamame along with more unusual offerings such its signature Han Maki or the matcha creme brulee.

As much as she loved her medical science studies, Olaqi said that chapter of her life has closed and she would not have it any other way.

“Going down this path was one of the most difficult decisions I’ve ever had to make,” she explained. “But I don’t regret it at all. I feel like this is what I was meant to be doing.”

Oishii Sushi, in As Sahafah district on King Fahad Branch Road, is open from 4 p.m. to midnight every day. Follow the restaurant on Instagram: @oishiisushi_sa