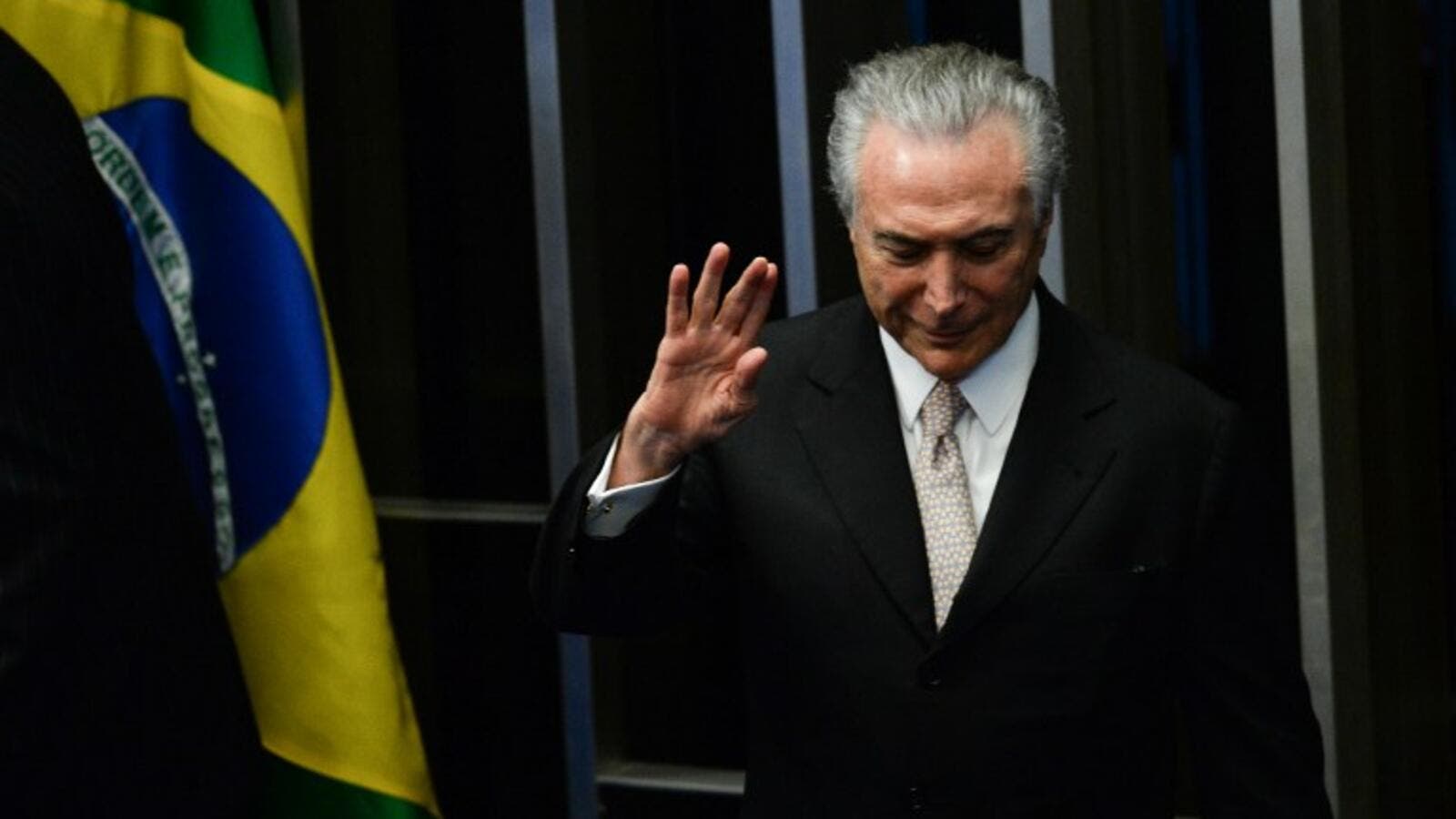 President Michel Temer waves as he takes office before the plenary of the Brazilian Senate in Brasilia, on August 31, 2016. (AFP/Andressa Anholete)

Temer, 75, was sworn in shortly after the Brazilian Senate voted 61-20 to convict the country’s first female president of illegally using money from state banks to bankroll public spending.

Temer, who is of Lebanese origin, shrugged off her claims that he had led a “coup” to seize power from her Workers’ Party government.

Sworn in to serve out the remainder of Rousseff’s four-year presidential term up to the end of 2018, Temer vowed to create jobs in the recession-stricken country and guarantee “political stability” to lure investors.

“My only interest is in handing over to my successor a country that is reconciled, pacified and growing economically,” he said in a pre-recorded television address, aired as he headed off to China for a G20 summit.

Rousseff told supporters at the Alvorada presidential palace on the outskirts of the capital Brasilia that she had committed no crime.

“They have convicted an innocent person and carried out a parliamentary coup,” she said, defiantly vowing that she’d “be back.”

In the day’s surprise twist, a separate vote to bar Rousseff from holding any public office for eight years failed to pass, meaning she could in theory re-enter political life.

The dismissal of Brazil’s president upset relations with leftist Latin American governments as Venezuela, Ecuador and Bolivia recalled their ambassadors to protest what they called a “coup” and Brasilia responded in kind.

Leftist leaders in Caracas, Quito, La Paz and San Salvador have been consistent allies of Rousseff and her predecessor, Luiz Inacio Lula da Silva, including Venezuelan President Nicolas Maduro, who said the United States was behind the impeachment push.

“This coup d’etat isn’t just against Dilma. It is against Latin America and the Caribbean. It is against us,” Maduro said in a televised speech. “This is an attack against the popular, progressive, leftist movement.”

Adding its voice to the criticisms, the leftist government of El Salvador said in a statement that Rousseff’s removal “represented a serious threat for Latin America’s democracy, peace, justice, development and integration.”

However, it did not say it would recall its ambassador.