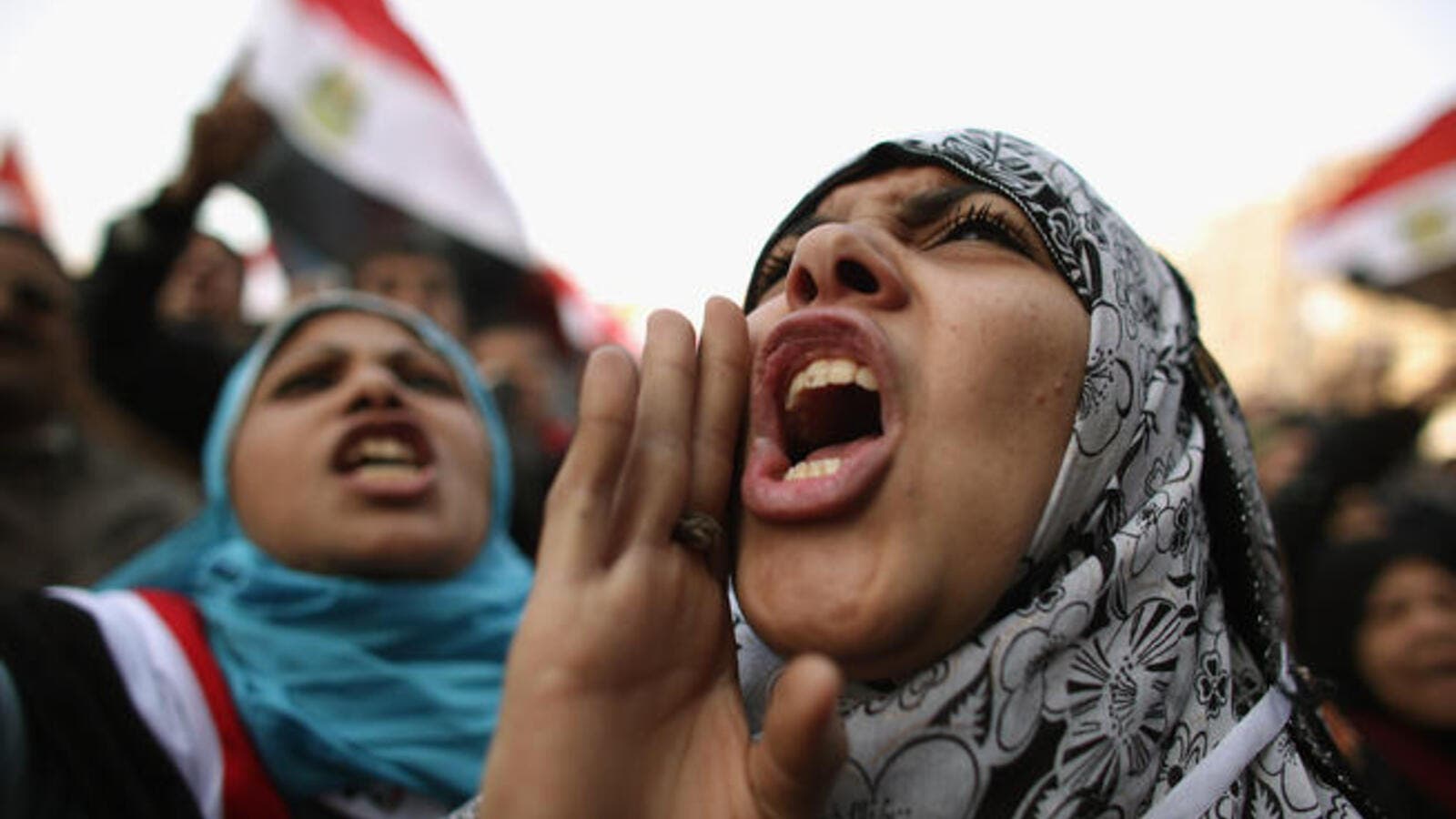 The women of Tahrir are part of the backbone of the revolution, but face the risk of violent sexual harassment on a daily basis.

Two articles that tell of the continued distress of badly-treated women in Tahrir, including foreign Arab American who was stripped of clothes and assaulted in Egypt's Tahrir Square.

Heather still doesn’t know how she made it home on Wednesday night after being in Egypt’s Tahrir Square. The Arab-American arrived back at her Cairo flat without pants, having had them torn off downtown. She and her two roommates were victims of a mob attack by people in the iconic square on Wednesday, as protesters demonstrated against the military junta.

According to Heather, an Arab-American living in the Egyptian capital, she and her Swedish and Spanish roommates took to Tahrir as thousands were converging there to mark one-year since the ousting of former President Hosni Mubarak.

“They started fighting over who was going to do what,” Heather told Bikyamasr.com in an exclusive interview. She came forward after seeing the report on a foreign woman who was stripped naked and assaulted only hours after her own incident.

“My roommates and I fell to the ground when they attacked us. The people pulled our pants off even as we yelled and tried to fight,” she continued.

The incident occurred around 7:30 PM local time, just as night was taking hold of the city. Heather said the attack happened “in the center of Tahrir.”

She said that after the men pulled their pants off, they continued to grab and grobe the women’s bodies. “It is disgusting. They put fingers up my ass,” she revealed.

“I was shaking and crying and the man and woman just grabbed us and pulled us out and took us out of the square.”

Later in the night, the issue of sexual violence toward women was sparked after an eyewitness reported on the micro-blogging site Twitter that a foreign woman was stripped, groped and assaulted by another mob of men in the square.

The woman, who’s identity has not been revealed, was taken away in an ambulance after being assaulted for 10 minutes. Her husband reportedly was unable to intervene and witnessed the incident.

“I saw the woman and then dozens of men surrounded her and started grabbing her, when she screamed for help some people came, but they were hit in the face,” wrote one witness.

What happened next was “appalling,” said the trusted witness, who asked for anonymity. “The men just started tearing at her clothes and grabbing her body all over. When she fought back, they pushed her. It was chaos.”

There were unconfirmed reports that the men “violated” her with their hands.

The nationality of the woman is unknown at the current time.

Throughout the day, sexual harassment towards women has been increasing and more and more reports of women being grabbed and groped began being reported.

Activists called the attacks on women completely “unacceptable” and must be exposed no matter what. They demanded an end to all violence toward women.

“What happened in Tahrir today has no justification and must be fully exposed even if it taints Tahrir!” wrote EgyptSecularist on Twitter.

Heather said that she came forward to talk about what happened to her “because people need to know what goes on. It is the only way to start making it a problem that will have to be dealt with.”

However, many people told her to not reveal what happened to her because she was told, “it would hurt the image of the revolution.” But Heather said after seeing the reports of others and their assaults, “I felt it was right to say something.”

A mob of men ripped the 40-year-old correspondent away from her crew and bodyguard, tearing at her clothes and beating her in broad daylight.

“People don’t really know that much about [post-traumatic stress disorder],” she told the New York Daily News in her latest interview on the incident. ”There’s something called latent PTSD. It manifests itself in different ways. I want to be free of it, but I’m not.”

In an interview with “60 minutes” in April, Logan spoke publicly about the incident for the first time. She confided that the attack lasted for about 25 minutes, as 200 to 300 men assaulted her. She feared for her life and imagined that she would not survive, she explained.

Logan was finally pulled to safety by an Egyptian woman and a soldier who witnessed the attack.

She and her team were brought back to their hotel, where she received an examination and medical treatment. She returned to the United States the following morning where she entered hospital for four days.

Logan confided in her latest interview that nightmares about the incident come at unexpected times, like when she is tucking her infant daughter into bed.

Instances of sexual assaults on female journalists covering the events in Tahrir Square have continued in the year since Mubarak’s ouster.

According to studies conducted by the Egyptian Center for Women’s Right (ECWR) in 2008, 98 percent of foreign women and 83 percent of Egyptian women surveyed had experienced sexual harassment in Egypt.

Thousands took to the streets in Egypt to protest against the military junta. By late Wednesday night, the conversation had turned away from the military council and on to Egypt’s most pressing social problem: sexual violence against women.

At least four women have been reported to have had their clothes ripped from their bodies, assault and groped endlessly by mobs of men in Cairo’s Tahrir Square. Certainly more reports of assaults will flood editors’ email in the coming days. It seems whenever there is a mass protest in Egypt it is accompanied by attacks against women.

This is not a new problem. In fact, the problem has been simmering silently since 2006 fall, when dozens of men and boys attacked and assaulted women outside a downtown Cairo cinema. In a mob style attack, the perpetrators attempted to grope and tear at any passing woman’s clothes in the October attack.

Eyewitnesses and citizen reporters’ pictures were clear proof that the terror against women had taken place. But Egyptian society, despite a few weeks of heated discussion, has remained largely silent.

One need not look to mob-style attacks, which have occurred at nearly every celebration or holiday in the country for four years and beyond. The facts on the ground, facing everyday women in Egypt are appalling at best. I have heard women tell stories of taking their attacker to the police station, only to be told by officers there that there really wasn’t anything they could do; courts would take too long. “Can you imagine if this had happened to a diplomat’s wife, or a foreigner?” one of the officers told a 30-year-old Egyptian woman.

Egyptians have attempted to avoid the situation plaguing society for far too long. If it happens to a foreigner, they apologize, but if it happens to their sister, their mother, their girlfriend, their spouse, there has always been a tacit denial of any real problem. Instead of trying to save face, what should be happening is a real dialogue, a real open discussion about the causes of sexual violence in society. Without one, these women will not be the last victims of sexual brutality.

While the most recent incidents should not damper the will of the Egyptian people to join forces in magnificent street demonstrations that rid the country of one dictator already, it can no longer be avoided. Sexual violence is not an aberration to Egypt. It has a deep-rooted history that must not be avoided through apologies. It has to be faced head on.

In the end, let us hope that this is the final “wake-up” call for Egyptian society to tackle this problem. Far too many women have been battered, beaten and raped in Egypt to allow it to continue. The very future of Egyptian society and a bright, prosperous future, could very well depend on how women are treated and empowered in the post-Mubarak Egypt.

There can be no revolution without women’s empowerment. Plain and simple.