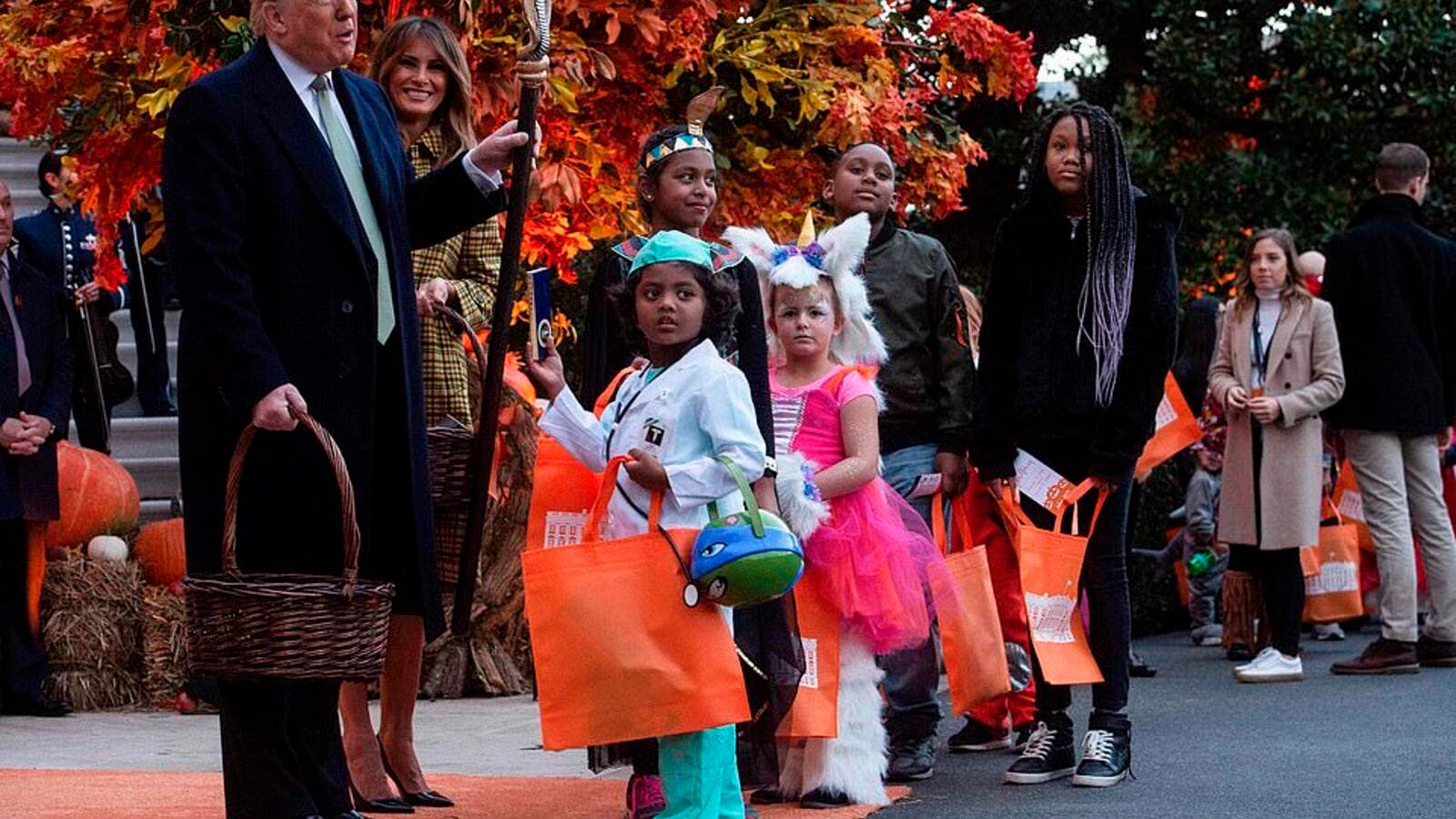 President Donald Trump borrowed a serpent staff from a child at the White House Halloween event on Sunday to wave in the direction of the media as he and first lady Melania Trump distributed chocolate bars and twizzlers to the children of military families before once again attacking the press on Twitter.

'Do you know what I'm doing,' he asked the two little girls, who were dressed in Egyptian style costumes as the first lady chuckled at his antics.

He waved the staff up and down and all around, as if he were casting a spell.

His Halloween antics come a day after the president stirred up controversy by joking about his 'bad hair day' and tweeting about the World Series, just hours after a gunman slaughtered 11 people at a synagogue.

He first told a young farmers convention in Indianapolis on Saturday morning that he almost cancelled the events because the weather wreaked havoc with his hair, and not the massacre in Pittsburgh.

Later in the evening he then took to social media while watching Game 4 of the series between the Dodgers and the Red Sox, and questioned the pitching changes.

But none of that was on display at the White House on a sunny and cool Sunday evening as the first couple welcomed children of military families and local schools.

After the kids were gone, however, the president took to Twitter to attack the media.

'The Fake News is doing everything in their power to blame Republicans, Conservatives and me for the division and hatred that has been going on for so long in our Country. Actually, it is their Fake & Dishonest reporting which is causing problems far greater than they understand!,' he wrote on Sunday evening.

But the earlier part of the evening was about the kids.

Harry Potter theme music played, a fog machine pumped spooky smoke, pumpkins abound on hay bales, and the columns of the White House were decorated as corn stalks for the event.

There was nary a political costume in sight.

Super heroes dominated - Wonder woman was popular for the girls - along with princesses, unicorns, astronauts, and the Stay Puffed Marshmallow man.

The first lady, dressed in a yellow plaid coat and her signature stilettos, seemed to particularly like the animal themed costumes.

The first couple entered the South Lawn of the White House on an orange carpet to the music from Thriller and stayed outside for a little more than hour, handing out treats for kids to put in orange plastics bags stamped 'Made in the USA' all along the top.

The president didn't give any public remarks at the event - which took place a day after the mass shooting at a synagogue in Pittsburgh - and only spoke to the children.

The first couple, who did not dress up in costume, passed out the treats from wicker baskets as the kids walked by them.

The Trumps posed for photos with all the kiddos with the president being particularly diligent about calling kids back if they ran off before their parents got a snap.

Some kids even got extra candy from the president after they posed.

And while Melania Trump, who was wearing a $3,950 Bottega Veneta checked brushed-wool coat, would hand the candy to the kids, the president usually let them take it out of his basket or would drop it straight into their bag.

In addition to the sweet treats, the South Lawn was packed with fun activities.

NASA had a moon carpet set up on the South Lawn, and robotics displays was on hand from the First Lego Robotics League from the Department of Education.

Children were also able to see the Presidential Limo known as 'The Beast.'

There was also a hay bale maze to explore.