Published June 12th, 2021 - 08:13 GMT
Whoosh. This took more tries than I would like to admit... (Instagram)
Highlights
They are so kind, you can meet anyone on the street and they’re so nice to you.

A teenage British YouTuber might not be the first place one looks for a step-by-step guide to Umrah or for a tour of Madinah’s Grand Mosque — but for millions of people around the world, Obayd Fox has become the first point of call for all things Saudi Arabia. 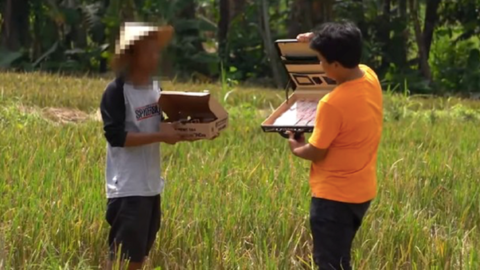 With half a million subscribers and over 20 million views across his videos, the teenager’s videos are not only becoming an internet sensation in the Kingdom and beyond, but they’re also overriding ingrained narratives about what life is really like in one of the world’s most misrepresented countries.

Fox, now 16, moved to Saudi Arabia when he was 10 after living in Egypt for six years. He told Arab News that it was initially hard to adjust: “Egypt has so much more greenery than Saudi Arabia.”

But since arriving all those years ago, Fox explained, he has not only embraced the country’s unique natural environment, but the Saudi people have made him feel more at home than he could have hoped for.

“One thing I always say about the Saudi people — and I’m not just saying this — they are, I think, the nicest people, honestly. They are so kind, you can meet anyone on the street and they’re so nice to you.

“There’s a respect that Saudi people have. When you greet them they ask about you, how you are, how your family is. Everyone does it.”

Fox’s “vlogumentaries,” as he calls them, feature him and his group of Saudi friends embracing all that the country has to offer — and they receive hundreds of thousands of views.

From inside looks at how Saudis do Ramadan to dune bashing in the Kingdom’s famous deserts, his channel gives a direct and unfiltered insight into what it’s like to grow up in Saudi Arabia.

“My videos have ended up being a lighthearted view of what I experience when I’'m there — no bias or anything. I enjoy it, I like living in Saudi Arabia,” he said.

He told Arab News that the Kingdom’s recent drive for international and domestic tourism means there’s plenty to keep him entertained.

“You can camp in the desert, and if you have a good car you can go off-roading and stuff — those are the things I’d recommend people do,” Fox said. But his number one suggestion for a visitor: “There’s no doubt in my mind that early morning snorkelling in Jeddah is my top recommendation.”

His next destination, he hopes, is AlUla. “I’ve seen all the YouTube videos and I really want to go.”

The young YouTuber, who despite his online success is currently studying to complete his A-level exams, explained that, to his friends back in the UK, the Kingdom feels overwhelmingly foreign — completely alien to their own lives.

“Saudi, for them, feels like such a distant mythical land that nobody can even imagine,” he said. And while his videos give them something of an insight about what it’s really like, he explained that what people should really do is visit the country and experience it for themselves.