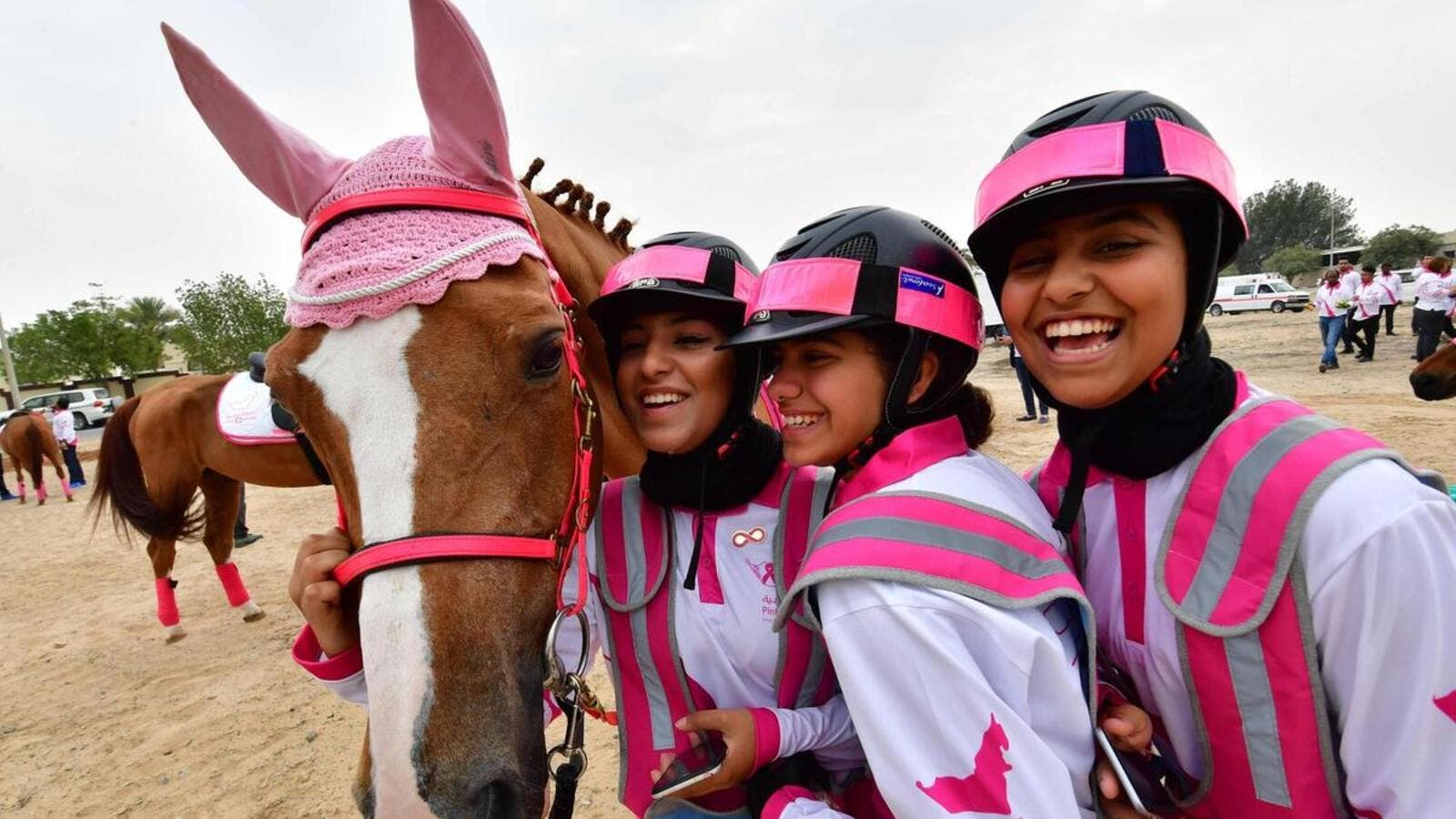 The Pink Caravan Ride, a UAE-based initiativeseeks to raise awareness of self-examination for breast cancer. AFP
Highlights
Besides raising awareness on early detection of breast cancer, the ride will also offer free screenings.

The 10th edition of the annual Pink Caravan Ride will set off on its nationwide journey on February 26, spreading breast cancer awareness across the emirates till March 6.

Sheikha Jawaher bint Mohammed Al Qasimi, Wife of His Highness the Ruler of Sharjah, Founder and Royal Patron of Friends of Cancer Patients (FoCP) and International Ambassador for the World Cancer Declaration of the Union for International Cancer Control (UICC), has approved the dates of the ride on Tuesday.

Besides raising awareness on early detection of breast cancer, the ride will also offer free screenings and clinical examinations during its annual trek. Marking its 10th anniversary, the ride will be held for 10 days this year, and witness an intensification of the campaign's community awareness efforts.

Sheikha Jawaher has urged all segments of society to proactively participate in the campaign by joining the ride's equestrian or medical teams and committees, or by volunteering in its numerous associated events and donation drives. She also called on public and private sector entities to join and collaborate with the ride to step up efforts and take action to tackle this rapidly rising burden.

In a statement, Sheikha Jawaher said: "Sharjah's status as a beacon of culture encompasses its advances in promoting good health. Educational awareness is key in protecting oneself from or keeping certain illnesses at bay. Good health of the whole community is vital to the continuance of a nation's journey of development, and this is the key message that the PCR seeks to instil in every individual, family and institution."

The Pink Caravan champions several values and pillars, she added. "The campaign is built on knowledge and based on cooperation and unity; it marches forward with transformative stories of challenges turned around into inspiring successes; and it constantly provides a glimmer of hope, leading to greater awareness of one's health. These objectives are aligned with the UAE Vision 2021 that aims to reduce cancer and other non-communicable diseases (NCDs) to ensure a longer and healthier life for all residing in the country."

Since its commencement in 2011, the Pink Caravan Ride has travelled more than 1,800km on horseback with the participation of 670 volunteering riders and 810 on-ground volunteers, offering free breast examinations and medical consultations to more than 64,000 men and women across the UAE. The campaign's efforts over the past nine years have led to the positive diagnosis of 75 breast cancer cases. During this period, the PCR has also helped heighten the community's awareness of breast cancer, educating them about ways to identify early signs and symptoms associated with breast cancer, and gone a long way in rooting out misconceptions about the disease.

Each year, the Pink Caravan, a pan-UAE breast cancer awareness initiative, organises this ride, which travels across the seven emirates educating people through its four different routes. The Equine Route sees 150 female and male equines of all nationalities advocating awareness through the campaign. The Medical Route is led by the 200 volunteering medical personnel who offer free examinations at 30 fixed and mobile clinics stationed across the seven emirates. The Events Route hosts a series of awareness-themed community events. The Fundraising Route witnesses several cancer fundraisers, and is represented by over 150 volunteers.