Doomsday Clock is set at 90 seconds to midnight

Published January 25th, 2023 - 07:25 GMT
In this handout photo provided by Hastings Group Media on January 24, 2023, the Doomsday Clock reads "90 seconds to midnight," a decision made by The Bulletin of Atomic Scientists, during an announcement in Washington, DC.(Photo by Handout / Hastings Group Media / AFP)

ALBAWABA - Doomsday Clock is now set at 90 seconds to midnight, 10 second less than in 2022, making it the closest prediction ever on the impending apocalyptic annihilation of the universe. 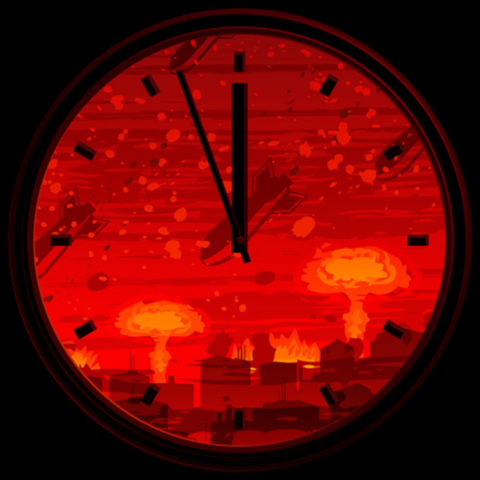 How Close Are We to the Apocalypse? The Doomsday Clock Has an Answer

The likelihood that Russian President Vladimir Putin may use nuclear weapons in the war he waged on Ukraine is the main reason for moving the clock 10 seconds forward this year, the Bulletin of the Atomic Scientists said in a statement.

The Doomsday Clock, a metaphorical measure of challenges facing humanity, has ticked closer to catastrophe than ever.

The change is due "largely, though not exclusively" to the war in Ukraine.https://t.co/vA77pQxir9

Other reasons such as climate crisis and COVID-19 also affected the clock's timing this year.

Dr. Rachel Bronson, president and chief executive of the Bulletin of the Atomic Scientists, explained that the "point of the clock is to assess where humanity is, and whether we are safer or at greater risk."

The Doomsday Clock, found in 1947, is a symbolic representation of  the likelihood of a man-made global catastrophe, in the opinion of the members of the Bulletin of the Atomic Scientists.

Bush wanted to get rid of Arafat

With no electricity, Lebanese turn to felling trees