Published June 2nd, 2021 - 05:48 GMT
Scene With The Holy Family With Comet At Sunrise (Shutterstock)
Highlights
The holy family continued on its trip to the Nile Delta, stopping at the city of Musturod, only 10 kilometres from Cairo. "The Virgin Lady", a 12th century church, was found in the city.

The story of the holy family’s journey from Palestine to Egypt has long been recorded with dedication by historians and authors around the world. 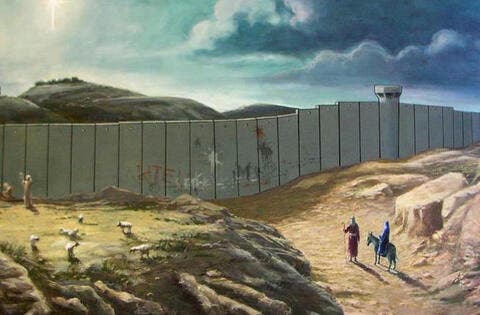 Many look upon the journey as a mark in the history of Egypt, not merely a religious event. Egyptians look with fondness and pride on the passage of the holy mother and her child through the land of Egypt, and the fact that they found solace here.

The flight to Egypt

The Virgin Mary gave birth to Jesus in Bethlehem of Judaea in Palestine. Upon his birth, wise men preached to the people of the city, declaring that Jesus was the chosen one, and that, "according to prophecies" they had seen in the stars, he would become the next king of the Jews. Upon hearing the news, King Herod was overcome by terror at the possibility of losing his throne. He decided that killing Jesus was the only way to protect his royal status.

In a dream, Joseph, the carpenter, was ordered by God to escort Jesus and his mother to Egypt, where they would find refuge. Both Western and Eastern traditions agree that the method of transport most likely used by the holy family on their journey to Egypt would have been a donkey. In this situation, the Virgin Mary would have been seated on the donkey, holding the child Jesus in her arms and Joseph would have walked by their side, leading the way.

On The Trail Of The Holy Family In Egypt - https://t.co/ckPDdxmRzS #EgyptToday

The holy family in Sinai

Keller writes in his book, The Bible as History (1955): “A day's journey from Gaza brought the holy family to the ancient township of Jenysos, which is mentioned by Herodotus, the Greek historian.” Today, this village, which is part of the Gaza Strip, is known as Khan Younis. “The next town on the holy family's route would have been Raphia (Rafah), the frontier town between the Gaza Strip and the province of Egypt."

Continuing for another 44 kilometres, beyond Raphia, and after almost two days of traveling, the mother and child reach Wadi Al-Arish, a point at which they are safe enough to obtain food and shelter. The holy family passes by other towns in Sinai such as Al-Muhammadia and Al-Farma, located 35 kilometres east of El-Qantara City. Churches from the 5th and 6th century have recently been discovered in Al-Farma.

Route to the Nile Delta

The holy family continued on its trip to the Nile Delta, stopping at the city of Musturod, only 10 kilometres from Cairo. "The Virgin Lady", a 12th century church, was found in the city.

Featured -- On the trail of the Holy Family in #Egypt https://t.co/s2V3qTgwCm#Jesus #Coptic

Keller adds in his book: “The city of Musturod was again visited by the holy family on their return journey to Palestine." After leaving Musturod and passing by Belbes, the holy family travel west to the Valley of Natroun, crossing the western branch of the Nile (the Rasheed branch).

The holy family in Cairo

The movie Journey of the Holy Family portrays the settlement of the blessed family in Al-Mataraya district near Ein Shams (Old Heliopolis). They find shade under a sycamore tree that came to be known as "Mariam’s Tree," which has evolved into an engrossing attraction for religious tourists. The holy "Mayron oil," or the "Chrism," is nowadays prepared from the oil of the tree.

An ancient church was built in the area by the name of "The Virgin Mary" and is visited by people to this day. Paintings can be found inside the church, including maps of the holy family’s journey, as well as a statue of Jesus and his blessed mother guarded by Joseph the Carpenter.

In his book The Geography of Coptic Egypt (1989), French historian Amelenio narrates some of the stories passed down about the miracles of "Mariam’s Tree."

One such story tells how “the French army sat by the tree, drank from its well and wrote their names on its stems.” It is believed that some of the wounded soldiers were healed by its oil. Amelenio adds: “Al-Matarya district became the most popular shrine in Egypt; a place where people flooded to for blessings and spiritual remedies.”

The second district visited by the holy family in Cairo was Al-Zeitun, where a church by the name "The Virgin Mary" was constructed in Toman Bey Street. It is said that appearances of the blessed lady were witnessed around the domes of the church up until recent years. 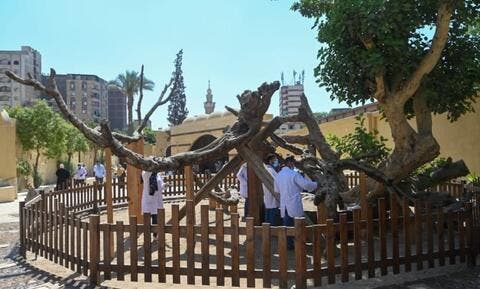 Another spot visited by the holy family was Zowela Avenue on at Been El-Soreen Street in El-Gamaleya district. An ancient church is found there with the same name, "The Virgin Mary". It is considered one of the largest churches in Egypt and is distinguished by its basaltic style.

The holy family moved on to "Old Egypt" (Al-Fustaat) where they dwelled for a short time in a cave in Abi Serja’s Church, within the walls of the Roman Babylon fortress. “The cave is about 20 feet tall, 15 feet wide and does not have any windows,” as described by Amelenio, who believes the holy family's stay in the cave did not exceed a week. After leaving Al-Fustaat, they moved to Maadi district and settled at the location where the Virgin Mary Monastery and church were later built by the Nile.