Four Billion: Half of The World's Population Will be Overweight by 2050

Published November 19th, 2020 - 10:56 GMT
(Shutterstock/ File Photo)
Highlights
A first-of-its kind report on diets, food demand and waste found that the number of people who are obese or overweight is set to surge if trends continue.

Global eating habits have set the world on course to have more than four billion overweight people by 2050, new research predicts.

And 1.5 billion of those people will be obese, a new report released Wednesday suggests.

Meanwhile, 500 million people will likely be underweight and living at the edge of starvation

The Potsdam Institute for Climate Impact (PIK) found that, if current trends in what and how people eat in various parts of the world continue, already wide gaps in nutrition will only grow into gulfs over the coming 30 years.

In order to predict how global nutrition will change in the coming decades, the first-of-its kind study assessed trends in the kinds of food people are eating, how populations are growing, and how food is being produced, and wasted.

Since 1965, global consumption has been moving toward highly processed foods, high-protein meets, sugary products and carbohydrates.

Meanwhile, many populations have been skimping on vegetables, plant-based and whole foods and healthy starches.

The shift means more empty calories and high-fat diets that certainly pack on the pounds, but don't do much to actually fuel our bodies.

Innovations in food science have made many of our meals manufactured, rather than grown. 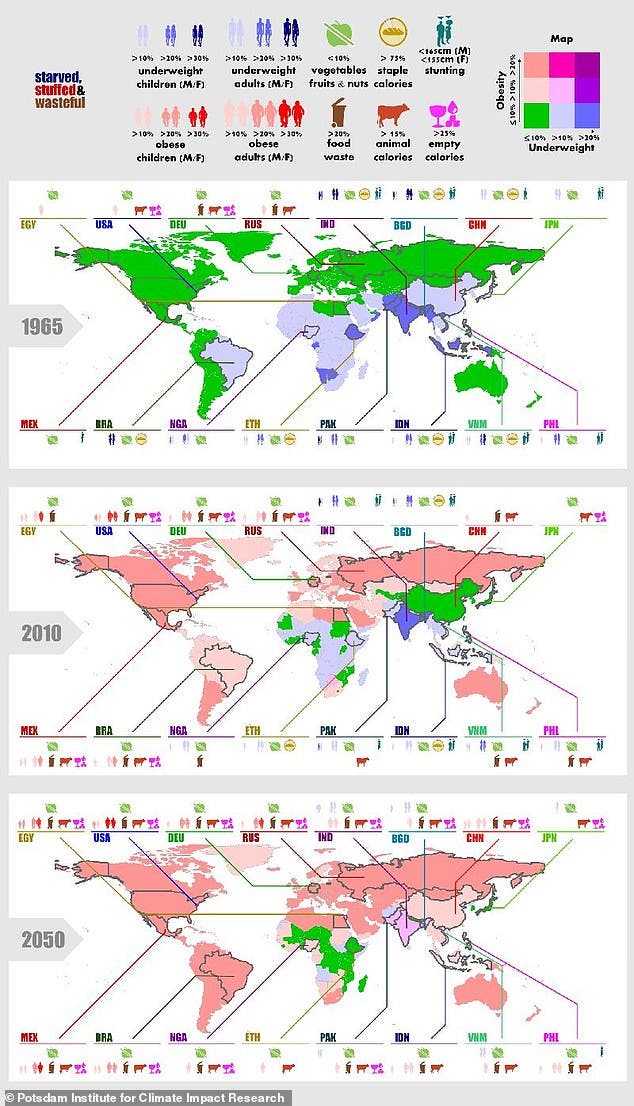 These processing methods are cheaper, faster and less vulnerable to the whims of weather and natural conditions, making them reliable, but not actually better for our health.

As a result, 29 percent of the world was already overweight by 2010, and nine percent were considered obese, with a body mass index (BMI) over 30.

The U.S. is ahead of the grim curve.

About 28 percent of the UK's population is now obese.

And rates are only rising in both nations and in much of the world.

By 2050, the PIK report estimates that 16 percent of the global population will be obese and nearly half (45 percent) will be overweight.

High rates of obesity and large populations of overweight people drive up and worsen some of the most burdensome chronic diseases in the world - heart disease, diabetes, and being overweight is now a top risk factor for COVID-19 to turn severe or fatal.

Demand for food will surge by 50 percent overall with demand for milk and meat doubling as wealthier nations siphon resources from poorer ones, where a growing number of people will be underfed, even starving, the German researchers predict.

'There is enough food in the world – the problem is that the poorest people on our planet have simply not the income to purchase it,' said lead study author Dr Benjamin Bodirsky.

'And in rich countries, people don’t feel the economic and environmental consequences of wasting food.'

In fact, waste is only expected to increase between now and 2050.

These trends, in turn, could lead to an acceleration in global warming and increasing food scarcity.

'The increasing waste of food and the rising consumption of animal protein mean that the environmental impact of our agricultural system will spiral out of control,' said lead study author Dr Benjamin Bodirsky.

'Whether greenhouse gases, nitrogen pollution or deforestation: we are pushing the limits of our planet - and exceed them.'

He and his team argue that using the same tracts of land and resources currently dedicated to producing un-nutritious food to instead grow nutritious produce could be a win-win, improving human health and sparing the planet from harmful emissions and deforestation that are the collateral damage of current food production.

'Using the same area of land, we could produce much more plant-based food for humans than animal-based food,' explains co-author Alexander Popp, head of PIK’s Land Use Management Research Group.

'To put it in a very simplistic way: If more people eat more meat, there’s less plant-based food for the others - plus we need more land for food production which can lead to forests being cut down. And greenhouse gas emissions rise as a consequence of keeping more animals.'