How Did Sheikh Khalifa Help in Preserving Nature and Wildlife?

Published May 16th, 2022 - 07:41 GMT
UAE's President Sheikh Khalifa bin Zayed Al-Nahyan died aged 73 after a years-long battle with illness, triggering a period of mourning and a handover of power in the oil-rich Gulf state. (Photo by Karim SAHIB / AFP)
Highlights
His vision of conservation and sustainability was demonstrated through his support for path-breaking environmental initiatives

When the UAE lost President Sheikh Khalifa bin Zayed Al Nahyan on Friday, it lost a leader with a vision, a modern and fair Ruler who kept his country and people at the forefront of his policies. Sheikh Khalifa not only cared about his people, but also the habitat in which he lived and ruled. His love for nature and the environment — a love that he imbibed from his father, the late Sheikh Zayed bin Sultan Al Nahyan, was what defined him, and the greening of the desert state can be attributed to his vision and tireless efforts to protect the environment and country’s precious resources. 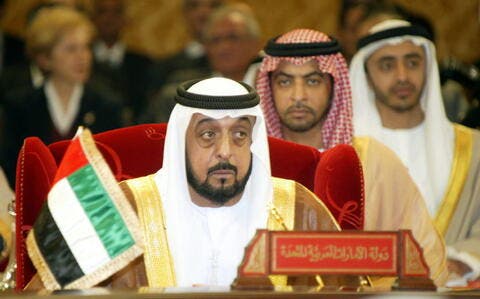 The late #SheikhKhalifaBinZayed's vision of conservation and sustainability was demonstrated through his support for path-breaking environmental initiatives https://t.co/JOhA9W1Ge5

His pioneering environmental efforts were inherited from his father who also helped shape his love for hobbies such as fishing and falconry.

The UAE’s Founding Father, who took to falconry from a young age, was a tremendous proponent of falconry and strived for the preservation of this heritage sport. He embodied the sport of falconry, and practised it often. The late Sheikh Zayed launched many initiatives to promote falconry, including a falcon release programme, and also established the Abu Dhabi Falcon Hospital, which has become the largest hospital for the bird species in the world.

Likewise, under late President Sheikh Khalifa’s leadership, environmental protection has become a cornerstone of the legislative system and government policies. It is also at the centre of the UAE’s developmental policies which aims to increase green areas; develop water resources; improve the marine environment and protect it from pollution; preserve fisheries and livestock; as well as protect, breed and reintroduce endangered species into their natural habitats.

In recent years, sustainability and environmental conservation has been added to school curriculums, which is helping hundreds and thousands of young and enthusiastic eco-warriors walk out of schools and universities across the UAE armed with a desire to preserve our fragile eco-system. Accordingly, efforts have been directed to make environmental conservation a major topic in school curricula and textbooks.

In February, in a speech marking the 25th National Environment Day, Sheikh Khalifa had said: “The National Environment Day, which we celebrate for the 25th year, is an important occasion to remember the efforts of the UAE’s leaders and people over the past 50 years, made to protect the environment, preserve the country’s natural resources, and invest in its land in a way that is conducive to providing continued prosperity and happiness for us and generations to come.”

Sheikh Khalifa and his eternal love for nature and wildlife – News https://t.co/iSzn8GSpY9

“The pioneering efforts of the UAE in the field of environment reflect the country’s national and ethical commitment as outlined in its vision on sustainable development and the need to lessen the impact of climate change through a joint action to confront its repercussions.”

Sheikh Khalifa noted that this comes in line with the UAE’s “Principles of the 50”, and the country’s development strategy and the vision of late Sheikh Zayed, who said: “We take from our environment as much as we need and leave the rest to ensure the rights of future generations.”