How do You Fight COVID on Top of Mount Everest?

Published May 23rd, 2021 - 05:07 GMT
Evening colored view of Mount Everest (Shutterstock)
Highlights
'I have the positive tests, so we can prove this.'

Dozens of climbers and staff on Mount Everest have tested positive for coronavirus following an outbreak of the virus on the world's highest summit, reports claim. 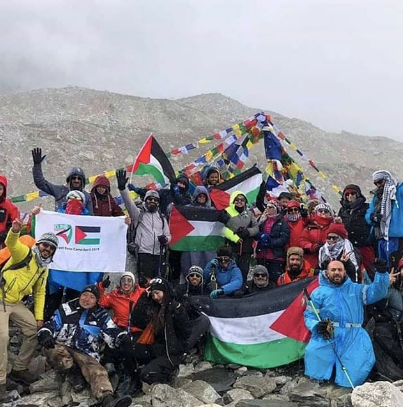 Palestine on Top of Mount Everest

Lukas Furtenbach, an expert climbing guide from Austria, has estimated there could be upwards of 100 active cases of Covid-19 at Everest's South Base Camp in Nepal.

However, Nepalese officials have denied this is the case, insisting there has not been an outbreak at the site where some 1,500 people are currently located.

They instead blamed any symptoms on other illnesses such as altitude sickness.

Mr Furtenbach, who is the only prominent guide to have axed his expedition due to virus fears, says one of his foreign guides and six Nepali Sherpas tested positive.

China has a lot to answer for... this virus can survive in all weather extremities!

He estimated there are 'at least 100 people, minimum' who are positive for Covid in South Base Camp, adding: 'The numbers might be something like 150 or 200'.

Elsewhere, it was reported some 77 Sherpas have tested positive for the virus, according to local health section coordinator Artimaya Tamang.

Speaking from Kathmandu, Mr Furtenbach said: 'I think with all the confirmed cases we know now - confirmed from [rescue] pilots, from insurance, from doctors, from expedition leaders.

'I have the positive tests, so we can prove this.'

He said it was obvious there were many cases at the Everest Base Camp because he could visibly see people who were sick and hear people coughing in their tents.

Mr Furtenbach runs Furtenbach Adventures, which boasts a 100 per cent success rate on Everest and 20 years of expedition experience on the mountain.

A total of 408 foreign climbers were issued permits to climb Everest this season, aided by several hundred Sherpa guides and support staff who have been stationed at base camp since April.

Tour groups must quarantine for three days on arrival in Nepal and take an RT-PCR test for Covid-19 before leaving for Everest Base Camp, the Telegraph reported.

However, it was alleged this is not being enforced and around half the 43 expedition groups on the mountain were not tested before leaving Kathmandu.

Nepalese officials earlier denied there are any active cases among climbers and support staff this season at all base camps for the country's Himalayan mountains.

Other climbing teams have not confirmed any Covid-19 infections among their members or staff.

However, several climbers have reported testing positive for the virus after they were brought down from Everest South Base Camp.

Mr Furtenbach stressed that most teams on the mountain were not carrying testing kits, adding his team had helped conduct tests and confirmed two cases ahead of returning home.

Most teams are reportedly still at Base Camp, hoping for clear weather so they can make a final push to the summit before climbing season ends next month.

Last month, a Norwegian climber became the first to test positive at the camp.

He was flown by helicopter to Kathmandu, where it was confirmed he contracted Covid-19. He later returned home.

Nepal is currently experiencing a surge in cases, with 8,607 new infections and 177 deaths reported on Friday.

China last week cancelled climbing from its side of Mount Everest due to fears the virus could be spread from the Nepalese side.

Earlier this month, Nepal made an urgent plea for 1.6million AstraZeneca vaccine doses as the infection rate soared.

'People who have already got the first dose will be in difficulty if they don't receive their second dose within the stipulated time,' said Samir Adhikari, a senior official.

Nepal, between China and India, has already vaccinated more than two million people with the AstraZeneca vaccine provided by India and China's Sinopharm.

But authorities were forced to suspend the vaccination programme in April after the country failed to secure fresh dispatches of vaccine.

'I would like to request our neighbours, friendly countries and international organisations to help us with vaccines and critical care medicines ...to support ongoing efforts to combat the pandemic,' Prime Minister K. P. Sharma Oli said.