Kazakh artist Saule Suleimenova has found an ingenious reuse for the urban blight of plastic bags. By gluing together pieces of discarded plastic, she captures slices of Kazakh life in cellophane paintings. An exhibition featuring some of her artwork is on display in “The Last Hero of the Great Steppe,” at the Andakulova Gallery in Dubai until October 9. 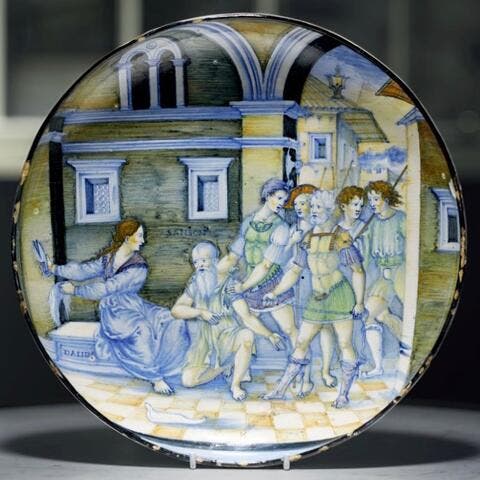 Rare Dish With a Biblical Story Sold for $1.7 Million in Scotland

“I started working with plastic in 2014. It was a ‘Eureka!’ moment. I wondered why I hadn’t noticed such bright, generously dyed and widely available material as plastic and garbage bags before,” Suleimenova, who is based in Kazakhstan’s largest city, Almaty, tells Arab News.

At first, the artist says, she was drawn to plastic bags for purely aesthetic reasons as she found them “brighter and shinier” than acrylic or oil paints. The sustainable aspect of reusing plastic was a secondary realization that gave her art a more-contemporary relevance and meaning and provided creative value to a material that has become a massive environmental problem.

“Plastic trash is such a huge problem all over the world. I feel that I have a responsibility to share with people how to reuse plastic and how to reconsider the garbage we leave behind us,” says Suleimenova.

The artist’s homeland has not escaped the destruction wrought by plastic. In Kazakhstan’s iconic Steppe (dry grassland), it has become an inseparable part of the landscape. Even when litter is placed in bins, she says, the wind still blows it away, across the plain.

“My art made me accept the fact that the romanticized features of nature, as we know it, no longer exist,” Suleimenova says. “Instead, we should search for new ethical forms within this plastic reality.”

Suleimenova began by pressing bits of plastic bags between two transparent plastic sheets. After a year of experimenting with different surfaces, she invented her own technique: gluing pieces of the bags with silicon, using a glue gun, onto polycarbonate sheets or polyethylene film.

Suleimenova’s work has been displayed in several solo and group exhibitions in countries including Russia, Germany, Switzerland, France, the UK and the UAE. “The Last Hero of the Great Steppe” is a curated series depicting the land, people and archetypes of her nation — village scenes set against the backdrop of the Kazakh Steppe; brides; women in native costume; snippets from the ‘Qazaq Koktemi’ (peaceful protests by Kazakh civil society in 2019); and more.

Suleimenova was born in 1970 in Almaty, the former capital of Soviet Kazakhstan. Her father was an architect and her mother an ethnomusicologist. “I am an only child and both my parents are incredibly strong and beautiful personalities who have influenced my life a lot. I deeply appreciate my mother’s knowledge of rich Kazakh culture. From my father, I learned that art can be magic in our hands,” says Suleimenova, who graduated from the Almaty State Academy of Architecture and Construction with a degree in design in 1996.

Suleimenova’s art has had a social impact too, involving the public in her creative eco-campaigns. In 2015, for example, she ‘crowd-sourced’ plastic bags from locals to help her make “Kelin,” a 24-square-meter cellophane portrait of a bride. (The image of a young lady to be married, or a new bride, is a recurrent symbol of rebirth in her work.)

“People from all walks of life gathered to help me build the image,” she says. The painting was hung over a street in her hometown. She placed furniture on artificial grass underneath it so that viewers could lie there and observe the work from below.

In 2020, she initiated another public project that led to the collection of 5,000 plastic bags for a five-meter-long installation called “Sky Over Astana.” 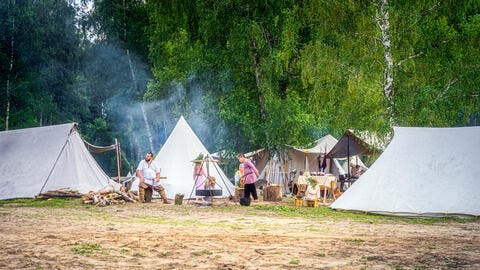 Besides reuse and reconstruction, decolonization is an intrinsic aspect of Suleimenova’s work. Years of being part of the erstwhile Soviet Union meant that the ethnic culture and language of her people was often suppressed. Decolonization, for Suleimenova, is an attempt to respect one’s identity and roots.

“(My aunt has told me) that, in the 1950s, they could not speak Kazakh on the streets, it was considered savagery. Kazakhs began to be ashamed of themselves. That is why, in my work, I talk about the beauty, value and dignity of accepting ourselves as we are,” she explains. “Through recycling and reconstruction, I build a new memory of the things successfully forgotten in Kazakhstan to construct a new nature.”