Lesbian Women Claim They Have Deep Romance Without Sex

Published April 27th, 2021 - 10:16 GMT
Lesbian Couple Together (Shutterstock)
Highlights
But currently, they believe they're 'platonic soulmates' - having even got matching tattoos that read 'Kismet' in October, which means 'fate or destiny'.

A gay woman and her straight best friend have called for marriage to be 're-imagined without the need for romance' after exchanging vows in a 'small ceremony'.

Deidre Olsen, 30, decided to marry her model pal Chiderah Sunny, 25, both from Toronto, Canada, on February 25, 2021, after first meeting two years ago.

The couple, who don’t share a romantic relationship, live together in Berlin, Germany, with writer Deidre’s 13-year-old dog, after leaving their hometown in June 2020.

They first met on a Hinge date, and while there was 'instant chemistry', Chiderah realised not long after that she was straight - but that didn’t stop the pair from forming a solid relationship and believing they were soulmates.

Happy lesbian day of visibility to the woman I’ve been waking up to for the past 9 months 🥰💕 pic.twitter.com/XGdd1kQb4M

In fact, it was Chiderah who proposed to Deidre, with the couple enjoying a small, intimate ceremony with three close friends on the writer’s 30th birthday. They say they are now in the process of filing paperwork to be legally married.

Speaking to FEMAIL, Chiderah said: 'I knew I loved Deidre when we first moved to Berlin. Everything was just so magical and fell into place so beautifully.

'It was nearly unexplainable how much joy I derived being in her company. With Deidre, for the first time in my life, I've experienced unconditional love.'

She added: 'My perception of marriage has changed. It's not rooted in romantic love, which I was conditioned to believe.

'Instead, marriage is about care-giving, friendship, forgiveness, love and communication. I think marriage, alongside every traditional institution, can and should be re-imagined on one's own terms.'

The pair revealed they both seek 'casual sex and companionship' elsewhere - and insist that they'd be open to their relationship evolving and growing if they met other people they liked romantically.

But currently, they believe they're 'platonic soulmates' - having even got matching tattoos that read 'Kismet' in October, which means 'fate or destiny'.

'In my opinion, a soulmate is a person who elevates you to new levels, who inspires you to be better, to reach your dreams and never doubt yourself because they love you with such fierce conviction,' said Deidre.

She added: 'We realised we were soulmates when we first moved to Germany, given how much magic happens when we are together.

'In our first two weeks in Berlin, I won a prestigious arts grant to write a memoir and Chiderah was signed to Viva Models Berlin, one of the biggest agencies in Europe.

'Prior to meeting Chiderah, I'd never known anyone who had such a powerful impact on my life. With her, mountains move.'

Happy Lesbian Day to the most amazing woman I’ve ever met. pic.twitter.com/na2suQFtAs

Chiderah proposed to Deidre after the writer pulled her out of the 'depths of despair' following their move to Berlin.

She recalled: 'In January, I felt like the promise of a better life was starting to crumble before my eyes.

'I'd lost my first real romantic love, my career was at a standstill, my savings were dwindling, I'd been terrorised by bed bugs in our Airbnb and my body was going through the shock of acclimatising to a new country.

'I was in absolute peril and there was a moment when I thought I couldn't go on. I'd considered abandoning this dream I'd worked so hard to achieve.

'As I lay in my bed sobbing uncontrollably, Deidre heard my cries and came to console me. Before this, I'd never let anyone see me in such a vulnerable state.

'It was in this moment I knew I wanted to spend the rest of my life with her because no one had loved me like this before.'

The pair exchanged vows on Deidre's 30th birthday on February 25, 2021 during lockdown - with the couple holding a small ceremony in their Berlin flat with three friends, one of whom officiated.

'We had homemade cheesecake and smiled for Polaroid photos amid pink and silver balloons and decorations. We exchanged rings and vows,' recalled Deidre.

She added: 'We are in the process of filing paperwork to be legally married and are figuring out the local bureaucracy as we are newcomers to Germany.'

While the pair admit they've had some negative reactions to sharing their story online, their friends and family are fully supportive of their decision to marry.

Deidre said: 'They want us to be happy most of all, no matter what that means. There's been the odd naysayer online but the response has been overwhelmingly positive.

'Our story has sparked conversations and galvanised people to re-imagine relationships. So often, romance is made the hallmark of a loving relationship when it could actually be emotional support and care-giving.' 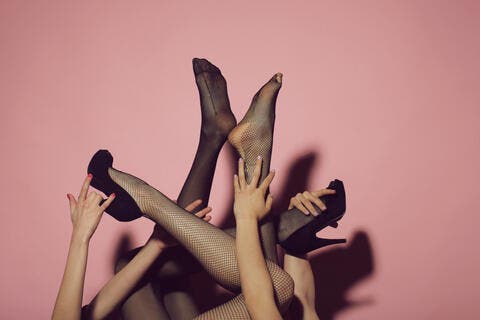 For the future, Chiderah and Deidre had considered starting a family together, and recently welcomed a second dog into their brood.

Chiderah said: 'We've discussed co-parenting in the future, maybe even with friends, because we believe it takes a village to raise a family.'