A Michigan dog on the loose for nearly a week was reunited with her owner after the canine was found to have traveled 7 miles on the ice of a frozen bay. 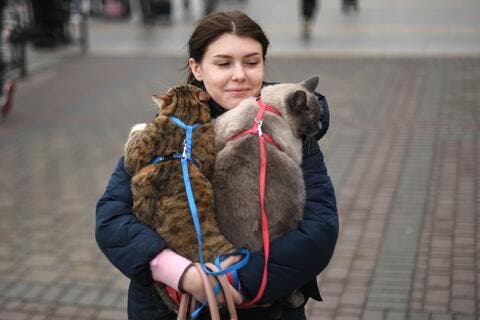 Save The Pets! Ukrainians Flee With Their Cats And Dogs

Autumn Arsenault, of Gladwin, said her dog, Maehem, a 3-year-old kai ken, was staying with her father in Bay City in late February while Arsenault was visiting Ann Arbor.

Arsenault said Maehem escaped from her father's house Feb. 26 and fled, apparently searching for her owner.

"I believe she frantically searched for me when she went through the door," Arsenault told MLive. "My father ended up falling on the ice and startling her, she took off.

"He chased her more, which in turn scared her more. He lost visual of her on State Park Drive and Lagoon Beach. I was in Ann Arbor and felt so helpless."

Arsenault launched a days-long search for Maehem, and ended up contacting T.K. and Son Ice Recovery after someone reported sighting the canine on the ice covering Saginaw Bay.

Arsenault received a message Wednesday from a man named Aaron Wolf who reported spotting Maehem on the ice.

Wolf remained nearby to watch the dog until T.K. and Son Ice Recovery arrived on the scene with Arsenault in tow.

Arsenault said the location at which Maehem was found on the ice was 7 miles from shore.

"We took three snowmobiles out with us on the backs and arrived at the location and there she was," Arsenault said. "We made sure to park the snowmobiles at a distance because of the fear she'll run.

"We walked up and called her and she came right up to us, crawling into our laps with lots of kisses. We slipped the collar on and road back to shore with her in our arms."

Michigan woman's missing dog found on the ice 7 miles from shore: A Michigan dog on the loose for nearly a week was reunited with her owner after the canine was found to have traveled 7 miles on the ice of a frozen bay. https://t.co/Bq7wvfA45s

T.K. and Son Ice Recovery shared photos and video from the rescue and reunion on Facebook.

"I can't describe the feeling of having her home and safe," Arsenault said. "Relief is a clear descriptor, but there are so many other emotions. While the adrenaline still hasn't worn off, I can still feel some relaxation."